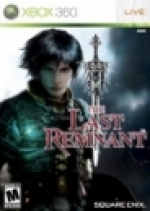 Square Enix supports the Xbox 360 with an RPG based on the Unreal 3 Engine. But is the game as good as Square’s other games or is it a sleeping pill in disguise?

The Last Remnant surely is one of those games that made me feel dizzy: First I was hyped and then I was disappointed. Then I thought it was getting better just to be disappointed again. Don’t get me wrong, I don’t hate the game. But while I was hoping for a great RPG I got just an average one with many flaws. It covers the story of Rush and his sister who is being captured by a mysterious group of people. And the “Last Remnant” adorning the game’s title will cross your way as well of course. But I don’t want to include any story spoilers in this review, so I’ll begin with the actual review now and tell you what’s good and what’s disappointing me about Square Enix’s RPG. Let’s start with the graphics, my major complaint.

When Square Enix licensed the Unreal Engine the gaming community’s expectations grew wild. This is the engine blockbuster games like Gears of War have been based on, one of the most impressive engines in the gaming world. Surely a well-known developer like Square Enix knows what to make out of it, right? But as much as the Unreal Engine 3 is a convenience product, a short development cycle or an inexperienced team can repel its strengths, while emphasizing its weaknesses just as much. The final product can still disappoint and that’s what happened to The Last Remnant. While the art style of the game is impressive and a typical Square Enix product when it comes to character and enemy design - which is a flattery rather than a flout - the technical conversion is lacking to say the least. Textures pop in during cut scenes, long loading times before every fight derogate the fun and the battles are so suffering from frame rate drops that at times my N64 games play like a breeze compared to it; you know, the ones that ran at a 'steady' 20fps. During fights the frame rate often drops to a level where your brain can’t connect the single pictures to a steady flow which is irritating. There is a way to reduce the annoyance - installing the game on your hard drive. This will result in faster load times and fewer frame rate drops but unfortunately the game will still play clumsily; it’s just not enough to make the game a graphically convincing product. People with an Arcade unit won’t benefit from it and they have to be taken into account as well.

The sound is a different story. While I didn’t notice a lot of catchy songs most of the audio presentation is well done and the battle themes sound good enough to support the tension by a significant amount. Voice acting is done well, too. Each character has his or her own dialect, Rush being the cool American type of guy - he has some really funny lines - and the King talking in a strong British accent for example.

But we shouldn’t focus too much on the presentation; gameplay is where a game truly has to shine. And while The Last Remnant’s gameplay isn’t the second coming it’s at least better than the graphical package around it. The game features a unique battle system. Instead of giving you control over a group of four or five characters you’ll command 'unions' consisting of five characters and the game will offer you different tactics. There are the typical things like attack and healing but you’ll also need a lot of teamwork; one union can keep the enemy busy to allow you to heal another one for example. You should always be careful when it comes to healing though, as it stops your current formation from actively attacking, thus lowering your penetrating power. A group that consists only of huge, strong characters may give you the edge in fights that demand a lot of attacking power but also has its weakness against a group of fast enemies. If you chose the members of each group wisely your chances of winning a tough fight will increase a lot. In a fight you can select between different options offered by the game. Those actions differ depending on the situation and sometimes you won't be able to perform your tactical move of choice but it works rather well most of the time. There are also quick time events during battles that let you increase the damage you deal. During an attack you will occasionally see a button blinking on screen; push it at the right moment and your damage will increase a lot.

That said the system can get exhausting during long fights. There are some that will take 30 minutes to finish, which is a lot if all you are doing is choosing actions indirectly. Be aware; once you've chosen the actions the rest of the round is mostly watching. You can collect parts of the monsters you’ve beaten and sell them on the market which is a decent idea but isn’t really necessary. The battles were one of the better aspects of the game to me. The frame rate drops sometimes make the battles annoying but you should get used to it after some time - at least when the game is installed on the hard drive, the ones without a hard drive should watch the first clip show in HD. The tactical influence is clearly there, it’s just sad you can only chose items for Rush himself while the other characters are played completely by the CPU. You have no chance of handing stronger weapons to them if they don’t ask and sometimes they’ll just stick with their weak sword even if you could offer them a far stronger weapon. I also have to note this is not an open world RPG but one that allows you to chose different locations from a world map; it really is a mix of JRPG and tactical RPG in the end. This is nothing terrible but worth noting nonetheless.

I have to admit The Last Remnant was a disappointment to me. I went in with high expectations but the presentation of the game soon became a major annoyance. It’s not like the game is unplayable as you can get used to it if you install it on the hard drive, but it lowers the amount of fun. And while the story is nice - I won’t give you any spoilers here - it still felt somewhat clichéd for a Japan RPG. Hey, at least the main character is not that emo this time. The game should be a bit shorter, though. I sometimes couldn’t even remember the last story piece when I got to a new cut scene. Only play The Last Remnant if you know that you’ll have the time to actually finish it during two weeks or so as there will be some long breaks between story driven sequences. This game can easily last up to 50 hours, depending on how seriously you take the side quests in the game, while the story feels more suited to a 30 hour game.

End of story? It's the sleeping pill. The graphics are disappointing, the sound is decent, the gameplay is ok but often tiring. It certainly falls short compared to Square Enix’s high profile games and I have to admit the presentation really made me sick at times, and I’m not one of those people who put much of their focus on graphics. In fact it annoyed me so much that I feel fine pointing this out for the third time. If it wasn’t for the nice effort in gameplay this game wouldn’t get an average rating from me. The visual presentation is so lacking it can destroy all the fun at times and that's absolutely inexcusable. If you are a hardcore RPG player waiting for a new game to play you may want to give The Last Remnant a rent. And while the Last Remnant surely has its bright moments all others should skip this one and hope for Star Ocean. Because that one looks much more promising than The Last Remnant ever did. For the score you can bring it down to this: Die hard RPG fans - but only them - should think of this game as a seven. Average Joes such as myself are directed to the score below, while gamers without a hard drive should lower the score to a six.

"Square Enix's The Last Remnant is a flawed gem. The game is filled with some of the most brilliant design decisions with depth of gameplay via Union-building and formations as well as the most flawed via forced choices for battle commands.

At its core, The Last Remnant is a strategic gamer's dream. The game pays homage to what made games like Ogre Battle: Person of Lordly Calibre a brilliant SRPG. Battles are usually fast-paced, and have a great system that employs both tactical, turn-based action and real-time QTE bonuses, but are very difficult at times. The Last Remnant is certainly not for the new JRPG gamer, thanks to its design decisions.

However, so many problems plague the game. Technically, the game is a mess. Having played 20 hours without the game installed to the HDD, I found myself aggravated at the constant loading that takes place before each battle and when going into a new area. Texture pop-in plagues various scenes in the game, and the frame rate can drop when big attacks are launched in battle. The install fixes a majority of the issues (loading times drop by ~70% and there are almost no frame drops in battle), which is a must-have if your going to play this game for extended stretches of time. Gameplay wise, it needed more fine tuning and perhaps the automated gambit system should be replaced with a litany of user-defined options. This would be more complicated, but would yield huge dividends for SRPG gamers.

Overall, The Last Remnant leaves you with the feeling that it's a masterpiece buried underneath some questionable design choices. I sincerely hope that Square develops a second game in the series, and improve the issues with the game. The game is one of Square's most innovative titles in years, and has so much going for it that feels right, however it begins to drag once you get further in the game, as some side quests feel rushed."