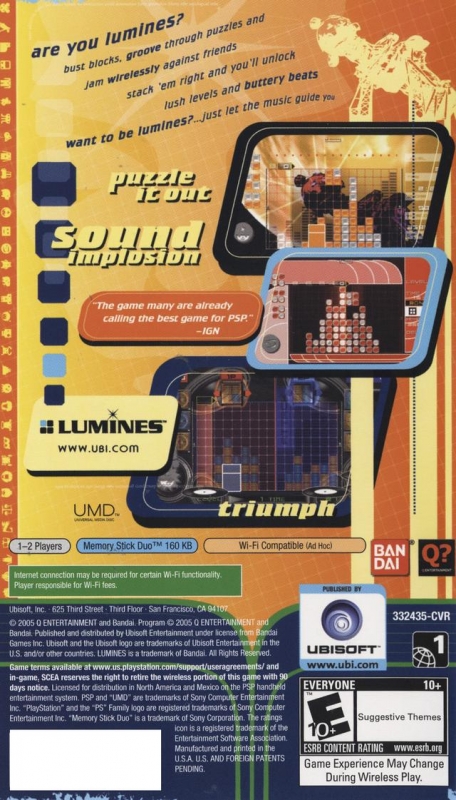 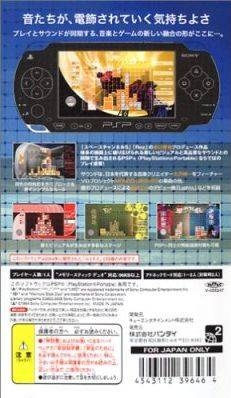 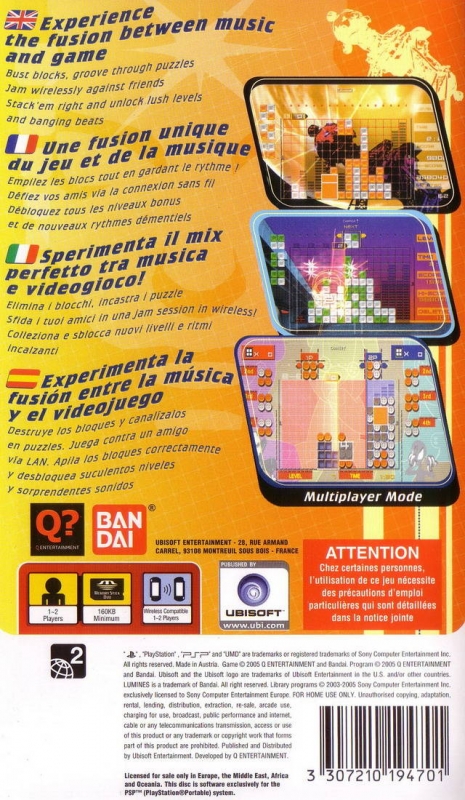 Back in early 2005 the PSP launched with a quality software line-up comprised of nearly 30 titles which included heavy hitters such as Twisted Metal: Head On and Ridge Racer. Among these titles was a quirky puzzler named Lumines which, true to its name, proved to be a shining gem of a game. Brought to us from the mind of visionary game designer, Tetsuya Mizuguchi and his team at Q Entertainment, Lumines is a marriage of falling block action and beat-heavy musical tracks accompanied by a trippy visual aesthetic. Luckily for puzzle fanatics it was, and still remains, a match made in gaming heaven.

The gameplay mechanics are pretty interesting and clear-cut. Two-by-two blocks composed of either one or two color schemes fall onto a grid based playing field, where the objective is to create as many four square blocks with one solid color as possible. Adjacent pairs of similar colored squares increase the size of the blocks and can be chained together to achieve the maximum points possible. All of this occurs while a metronome-like line sweeps across the grid clearing away the blocks you’ve created. The blocks act differently here than in more rigid puzzle games like Tetris, as here they can slide off the ledge of other blocks, expanding to fill the space allotted and leaving no gaps. It’s an important thing to note as it adds another perspective to look at the field and make more block combos. Of course every puzzle game needs a special piece to aid the player, and Lumines has a gem piece that when used in block combos strings all adjacent blocks of the same color together to be cleared by the metronome. The gem pieces serve as a game-saving device should the field get too crowded, leaving you close to a game over.

The controls are as simple as they could possibly be. The D pad moves the descending blocks left, right, or faster downwards. Any of the face buttons rotate the blocks 90 degrees to allow them to be placed any way you choose. If the above description of the gameplay seems a bit mundane, it should, because I have yet to discuss the significance the music plays in the game. Never before has music played such an integral role in how a game is played (outside of the rhythm game genre, of course). The speed of the metronome is dependent on the speed of the music playing in the background - or is it the foreground? The line has definitely been blurred here. Sure, you could play Lumines without the volume, but doing so robs you of a truly surreal gaming experience. Every move you make affects the beat. A different musical flourish is made whenever a block is cleared, moved, or rotated. These sounds never clash with the soundtrack but instead meld together perfectly to the point where it feels like the player creates their own music while clearing away blocks. By playing, you learn all the ways the block combinations interact with one another and how best to use them in order to create the longest chain of blocks possible. That is when the point of addiction has been reached.

Hypnotizing sights and sounds subdue the senses to the point where everything around you fades away leaving the glow of the screen and the omnipresent metronome as the masters of your universe. You could play this game for hours unknowingly as time ceases to exist, despite the timer keeping count on the corner of the playing screen. Like a mind-altering substance Lumines grabs hold of you and shows you a distorted yet pleasing view of the world or in this case puzzle gaming. To date it’s the only game that has left me feeling withdrawal symptoms, but that point of addiction and hunger is not assured to all who play this game.

For all of its simplicity, Lumines is by no means a casual puzzle game and play does not come as instinctively to beginners as games like Bejeweled or Tetris do. I’ve seen many people to whom I’ve recommended the game put it down, overwhelmed by how quickly everything is thrown at you. Others persist but are simply unable to find the appeal or acquire the necessary thirst to continue puzzling. Those that do find it however are consumed by it quite dramatically.

It helps that this game is so graphically appealing. The visuals and art direction here are simply brilliant. A lot of unique themes are touched upon, but all of them fit in quite nicely. Called “skins”, each playing field comes with its own musical theme and the visuals to match. Most of the game, including the blocks, are rendered in 3D despite the 2D nature of the gameplay. Like the music, the art in the background is affected by how well or poorly you play, but they are never distracting.

The game modes featured in Lumines are serviceable but not as standout or fresh as the gameplay. The Challenge mode is the meat of the game. Here, you simply play for as long as possible until game over. The longer you last, the higher your score increases and the more skins you play through and unlock. The allure of clearing more and more skins is what keeps you coming back to this mode time after time. Play sessions in Challenge mode can last an hour or even longer depending on skill and unlocking more skins is a sufficient reward for the time and effort required. Like true old-school gaming the Challenge mode requires you to start from scratch each time you play, which can be bothersome. The VS CPU mode is quite compelling, pitting the player against an AI-controlled foe on a single grid split evenly down the middle. Whichever player clears the most blocks each time the metronome sweeps across increases the size of their play area until their opponent can no longer place any blocks. The AI opponents play intelligently and mount a fair, sometimes brutal challenge. This mode also has unique skins to play through and unlock.

For players looking for a pure avenue to rack up a high score, there are the Single Skin and Time Attack modes available. Single Skin allows you to select and play on your favorite skin until game over. Time Attack is exactly as it sounds, challenging you to clear away as many blocks as possible within a certain lime limit up to ten minues. Ad hoc multiplayer is present and plays similarly to the VS CPU mode. Playing against a formidable friend or foe is really enjoyable and adds a personal element to the block busting action. The game is pretty bare bones at keeping stats - basically only wins, losses, and opponents played. There is also a Puzzle mode which tasks the player with forming shapes such as a giraffe or star with a single color of block, all to be cleared at once. It’s a novel if not entirely compelling addition to the title.

Though it can be very addicting, Lumines does not have as much content as it could. An online mode or a game-sharing feature would have gone a long way in extending the longevity and appeal of this title, but what is here is good. The soundtrack is a toe-tapping delight with a mix of both original and licensed songs. The music of Japanese artist Mondo Grosso fuels the gameplay like none other. Most of the music is techno, house, or hip hop, so if you aren’t a fan of those genres it could deter your enjoyment of this unique experience. Be sure to play with a pair of quality headphones to experience the best of the audio. Varying visual styles keep things interesting and transform the playing grid to the point where it becomes almost unrecognizable. It is clear that a lot of detail went into the creation of the skins and most of it pays off.

There are many alternative ways to jump into the world of Lumines. Since its debut  Lumines has spawned a sequel, a cell phone version, and downloadable console spin-offs. What makes the original version the one to buy is its one of a kind skins, with the standouts being “Shinin”, “Lights”, and “Shake Ya Body”. At its core this is a great puzzle game made better by a fantastic musical aesthetic. Though there is no guarantee that the game will hook you, you're in for a real treat and a new obsession if it does.