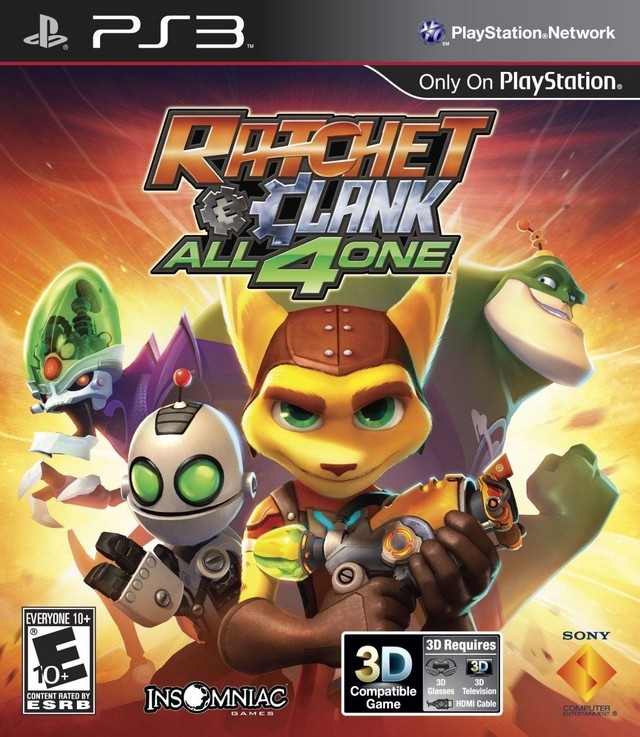 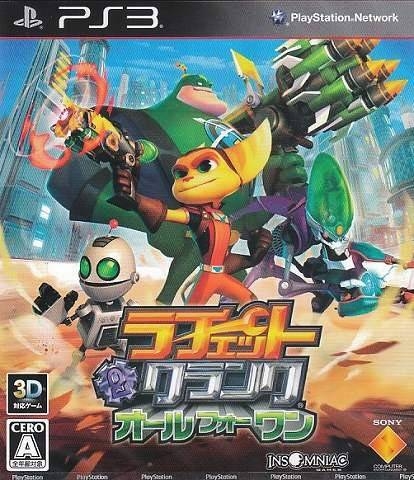 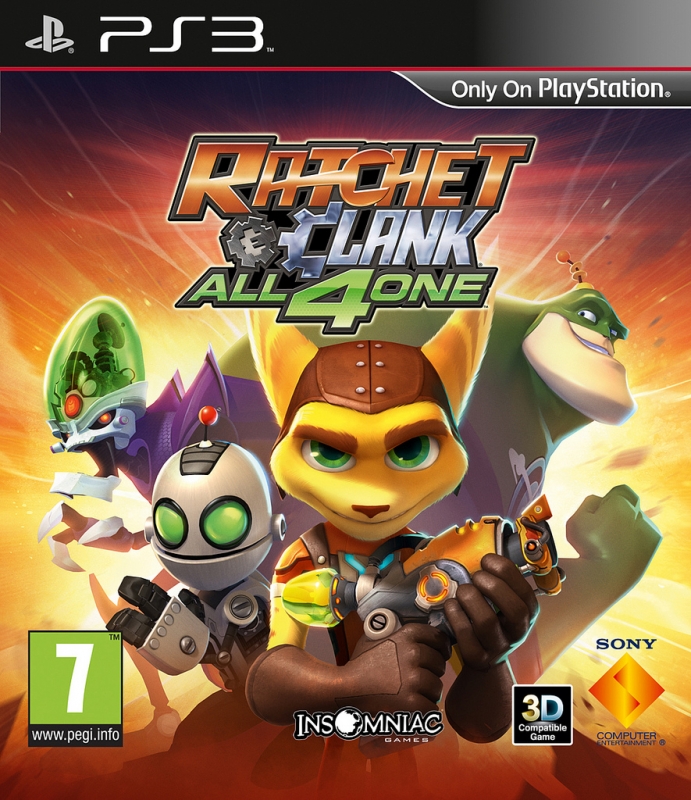 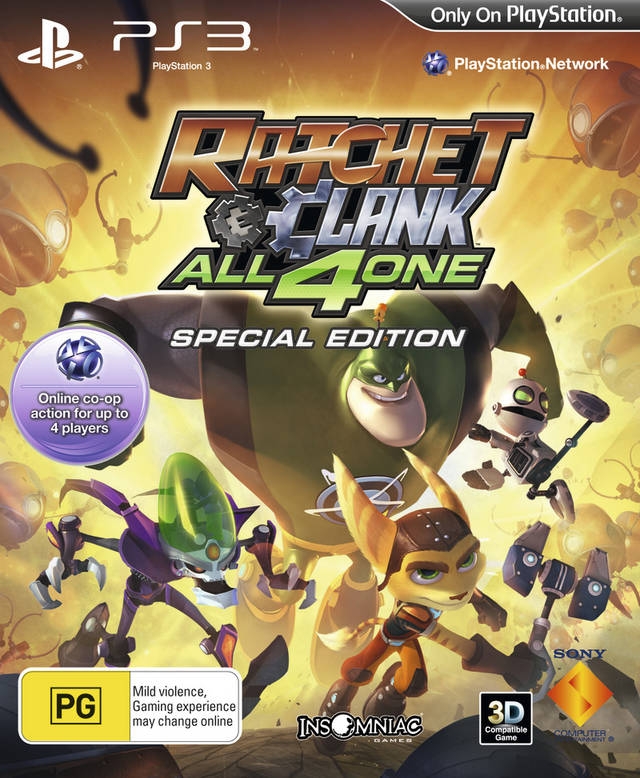 Ratchet and Clank: All 4 One

Back in the PS2 era, Insomniac games launched the Ratchet and Clank series with a trio of remarkably well received games that started with the original and concluded with the humorously titled Up Your Arsenal. They followed this up with what could be seen as a side-project game called Ratchet: Deadlocked, a title which focused almost entirely on the series' co-op features and was received less favorably than the trio that preceded it. Sadly, it looks like Ratchet and Clank: All 4 One repeats this pattern on the PS3, following up three well-received games with a lesser sequel that focuses on cooperative play.

Most of the things the Ratchet and Clank series is known for are still here for this iteration, such as the writing, graphics, sound, and gameplay; it's a very familiar affair, though some aspects are scattershot this time around. While the graphics are as creative and vibrant as ever, I found there were entirely too many glitches throughout. There were a few times the framerate would slow or I'd get stuck in a wall or the ground. For the most part it wasn't game-breaking, but there were a few times when an error would result in me somehow dying during a mini-cutscene and having to go back to the last checkpoint. This is not something that is really acceptable in a major retail game, even if it was released less than two months apart from Insomniac's last game, Resistance 3. At least they make up for it by giving us some surprisingly effective atmosphere throughout, something I didn't expect from the art direction of Ratchet and Clank.

Like the notable graphics, Ratchet and Clank continues the audio style of the previous games by retaining the same voice actors and not changing the feel of the score or sound effects in the least. However, in spite of the audio being basically the same, there were a few levels with genuinely moving background music that reminded me of Final Fantasy XII in the best of ways, and I have no idea why. On the flipside, the story was particularly poor. Ratchet and Clank games have been known for their humor and characters, but the stories have always been little more than a flimsy excuse to pit Ratchet against the villain du jour, making him traverse various locales blowing $#!% up. All that's well and good, but the story to All 4 One is even less interesting than Deadlocked, which was pretty shallow to begin with. In the end I had no idea what was going on until the final few missions, and even then I was wondering why the antagonist was even remotely dangerous or interesting. I still don't know for sure what its motivations were, and that doesn't exactly give you much drive to continue. Luckily the gameplay is as fun and frenetic as you've come to expect from Ratchet and Clank.

As the title suggests, Ratchet and Clank: all 4 One is a 4 player simultaneous co-op game. While the previous co-op title in the series (Deadlocked, for those keeping score at home) was content to simply make a game where two versions of Ratchet killed their way through waves of robots and random squishies, All 4 One heaps on 2 extra players and plenty of specific cooperative gameplay features; everything in this game is reliant on cooperation and teamwork. Hell, you aren't even likely to be able to kill bosses unless you're synchronizing your weapons and shooting patterns. This could easily have worked against the game, but I found it was pretty intuitive and simple to grasp. The only problem with cooperative play is that the fixed camera does a real number on your ability to precisely aim or control where you're shooting. It also led to more than a couple of off-screen deaths or aforementioned glitches.

Though there are issues, the cooperative features are actually impressive and well realized. While the shooting is still the primary aspect of the game, there are also a lot of platforming and puzzle-based sections scattered throughout, which does a damn good job at bringing the series back to its roots. The primary new feature to the game is the vacuum, which can suck in items or your friends, throw things around, activate switches, or heal your teammates (Trust me, you'll be doing this a lot). There are puzzles that involve using this vacuum on fans to move around a raft, sucking up electric critters to power generators, or manipulating items to move forward. There are even puzzles that involve moving your bodies around a platform to keep it level or working together to catch wind in a tunnel to make it to the surface. It's surprisingly well done and a lot of fun from beginning to end; at least, if you have friends you can trust not to mess it up. And if you don't have any friends, or don't want to play online, you can play through the game alone with Clank on your back to participate in the team-oriented tasks that, ordinarily, your partners would. Don't worry, none of the tasks require more than two players, and playing All 4 One by yourself is an almost entirely different experience in spite of the fact that the campaign is technically unchanged from the co-op version. If you're the adventurous type, you can create an online lobby to find players to join, and this is surprisingly easy and intuitive. Be sure to get a microphone, though; you will certainly need verbal communication in this game. The game is pretty long, too. While most games are content to give you a campaign that lasts 6-8 hours, Ratchet and Clank: All 4 One took me closer to 12 and I imagine most people would need at least 10 to just finish it. However, if you are a completionist there are also literally hundreds of collectibles to find throughout the many levels. In addition to the usual gold bolt collectibles you can find, there are also critters to collect, skill points to attain, and RYNO parts to discover. Going back to find this stuff is actually really easy, since the worlds and levels are easily divided in the main hub like a classic platformer's world map, allowing you to choose from a series of worlds and levels within those worlds. At the end of each level, you're even graded against one another to see who obtained the most bolts, found the most critters, performed the most team-based actions, or killed the most enemies, so it keeps up the urgency of competition while retaining the spirit of cooperation. While the game is long and has plenty to do, I still think it would have been better suited as a budget title, given the fact that the game is lacking polish.

Oh, and weapons! While there may not have been as many weapons as previous games in the series, All 4 One still has quite a lot of unique weapons to choose from. I won't say they're all fun, in fact about half of them are virtually useless (seriously, the second most powerful gun in the game didn't appear to do any damage to bosses), but Insomniac have once again shown us they know how to make interesting weaponry and gadgets. The thing is, the fact that half of the weapons appear useless means that a few of the firefights near the end of the game actually require more firepower than you have at your disposal. The other problem with this model is that, with all of the tools and weapons the game makes you use, the weapon wheel becomes a hell of a confusing mess. To activate the weapon wheel and choose a weapon, you have to hold the right analog stick in the direction of the weapon you want, then cycle through the wheels for primary weapons, secondary weapons, and tools with the R1 button; then you release the right analog to equip that weapon. This could have certainly used some tweaking or customization. In spite of its flaws, Ratchet and Clank: All 4 One still manages to be very fun. The sheer variety of gameplay types (shooting, platforming, puzzling, falling levels, grind-rail levels, skiing levels), and the surprising effectiveness of the cooperative features (tandem shooting, puzzle/platforming that requires teamwork) ensures that you're never bored or wanting for something new. There are plenty of weapons to use and upgrade, and plenty of items to find throughout the game, not to mention the fun cooperative features Insomniac have added. While the game certainly has its flaws, such as glitches and a poor camera, the game still remains fun throughout. If you liked Deadlocked, then you're likely to enjoy All 4 one. To get the most out of this game, invite three friends over and have fun but don't kill each other for stealing your bolts.