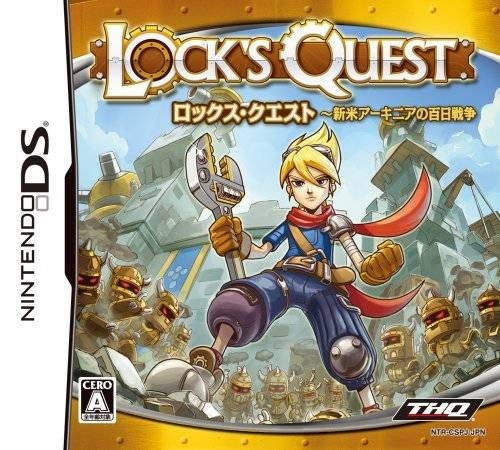 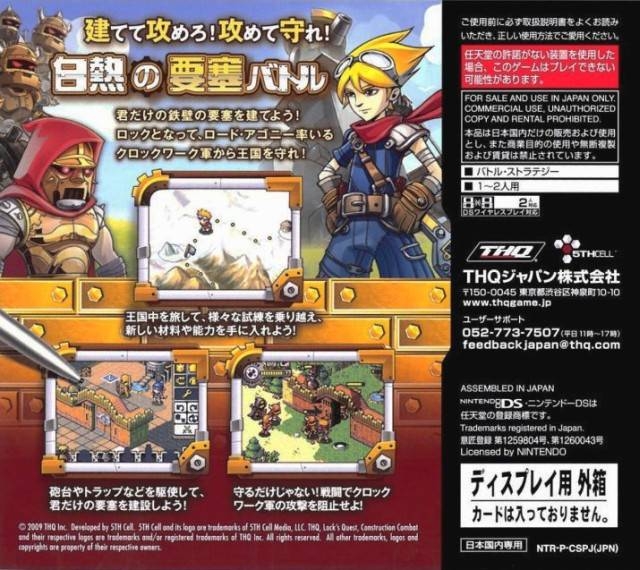 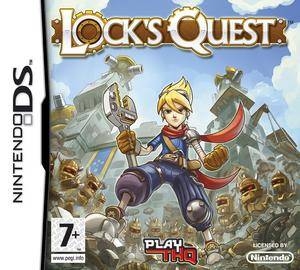 Tower defence is one of my favourite genres in gaming. And oddly enough my first (and to date still my best) experiences with tower defence games came in the form of that beast of the RTS genre – Starcraft. The map editor included with Starcraft has given rise to a massive community of online gamers who play Starcraft, not to battle it out in the main RTS part of the game, but to play one of the hundreds of thousands of user created maps. Some of the more popular maps available are tower defence games. For the uninitiated, tower defence games at their most basic involve the strategic placing and building of walls and turrets on a map, with the purpose of defending an objective from attack or preventing the enemy from reaching a set point on the map. Enemies then walk through the map in waves (either along a set route or one you’ve made yourself using the walls and turrets). In some games they attack your structures (as in Lock’s Quest), whilst in others they just walk through (as in Pixeljunk Monsters (PSN)), but either way your goal is to destroy the waves of enemies as soon as possible. 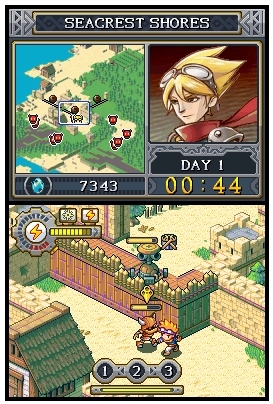 Lock’s Quest combines all of the key staples of the genre – the strategic building and placing of structures, the waves of attacking enemies, and the need to defend a set point on the map and destroy the enemy as quickly as possible. It also includes a fully fleshed out story (which seems to be quite rare in a tower defence game) and takes advantage of the touch screen to add some interesting twists to the gameplay.

The story is initially presented in the form of a superbly animated cut-scene, unfortunately these cut-scenes don’t appear all that often, but when they do they’re excellent. Usually the story is presented in the form of the standard dialogue scenes you come across in a lot of DS games, and whilst they aren’t nearly as impressive as the cut-scenes, the overarching story they present you with is quite interesting and grand in scope. A mechanical force has long been your kingdom’s enemy but it was widely believed to have been obliterated at the site of your people’s mythical last stand many years ago. However, it soon becomes apparent that your kingdom is once again under attack, and wave after wave of mechanical warriors are conquering and destroying every village in their sights. In a series of strategically offensive and defensive manoeuvres, you work together with other Archineers (those with the ability to erect these walls and turrets) and any allies you come across to defend your land and hopefully end the war.

A typical ‘level’ consists of 2 key phases repeated over a number of rounds – the building phase, where you purchase and place your defensive structures on the map, and the battle phase, where you’re usually tasked with repairing the structures and attacking enemy units. At the end of the battle phase you will usually have to quickly re-build your defences before the next battle phase commences, and so on until you complete your mission. A level will usually consist of 3-5 rounds, which means you’ll be focussing on one map for quite a while. Whilst it’s reasonable to expect there to be waves of enemies attacking, it does feel like a method the developers have used to unnecessarily extend your playing time, and it can make the game quite repetitive and boring after a while. 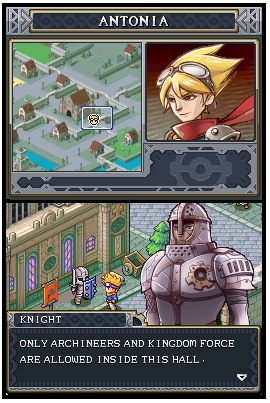 During the building phase the map will turn into a grid, you then strategically place a series of walls, traps and turrets of varying use and design (so for example some turrets will attack multiple enemies, whilst others only attack air units, and so on) onto the grid with the stylus. At times it can be quite difficult lining up these structures with the stylus. It’s important that your structures connect because you need to ensure there are no gaps in your defences and because they are stronger when placed together. Fortunately there are a couple of features that make the task of lining up the structures easier – the game will often successfully rotate and re-position structures so that you can connect them more easily, and everything can easily be moved around and edited if you make a mistake.

Unfortunately you’re usually only given a couple of minutes to complete the building phase, so when 30 seconds or so of that time is taken up with just one wall or turret that’s particularly awkward to position, it can be extremely annoying. When key parts of the building phase are as fiddly as they are I really don’t understand why a time limit was imposed. You only have a limited amount of funds to draw on anyway, so it’s not like you would gain an unfair advantage if the time limit were removed. When one of the most interesting and strategic parts of the game becomes a rush it removes a lot of the fun that can be had from carefully lining up your structures and then watching to see how well they hold up to attack. The timer is unnecessary, and the game would have been better off without it.

The battle stage involves a surprising amount of strategy and time-management. The mechanical army will keep attacking in waves until the timer reaches zero, so the game is more about holding out for the given time, rather than about destroying all of the enemies. You usually have two key tasks to complete during the battle phase (although other objectives are introduced over the course of the game) – attacking enemies and repairing damaged structures. 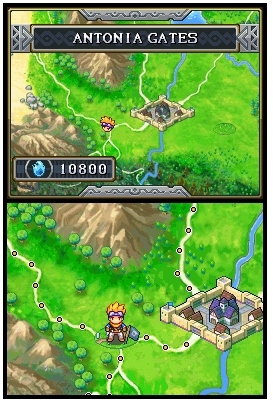 You move Lock around the map using the stylus, and attack/repair by simply clicking on the relevant unit/structure. Then to do extra damage and build up a special attack, or repair more quickly, you are introduced to a quick mini-game where you have to perform certain actions with the stylus, like quickly drawing out 4 circular shapes on the screen or tapping some numbers in quick succession. This is all done during the action and Lock only has a small health meter, which can deplete quite quickly when he’s under attack, so you have to be careful not to get too distracted by these mini-games.

Unfortunately the fiddly touch-screen controls that affected the building phase are also present (and are indeed even more problematic) in the battle stage. Clicking the correct enemy from a small group is almost impossible, so later on in the game when the enemy waves include powerful ranged attackers it can be extremely frustrating when Lock persistently attacks the wrong enemy. This isn’t just a problem during crowded battles though, even against a couple of enemies Lock can be extremely fussy about where he has to stand before he’ll commence an attack. He will often wander around an enemy unit, all the while being attacked, before finally settling on a part of the map he finds worthy of his attack. Sometimes he just won’t attack at all. Tap frantically on the enemy unit as much as you like, Lock ‘aint attacking until he’s ready.

A similar problem emerges when trying to repair a wall or turret. You can click like mad on the structure on your screen, but some of the time Lock will just wander around wracked with confusion, and even if he does decide to repair you can never be certain that he’s repairing the correct structure. During a close fought battle where defeat is on the horizon unless Lock starts repairing, it’s incredibly annoying when you lose purely because of the confused and inaccurate controls. Finally, Lock also has a tendency to become slightly too fascinated with the scenery. He will often get stuck on a wall or some other obstacle, so you’ll usually just have to keep the stylus on him constantly. All of these control problems can make the gameplay simply infuriating at times. 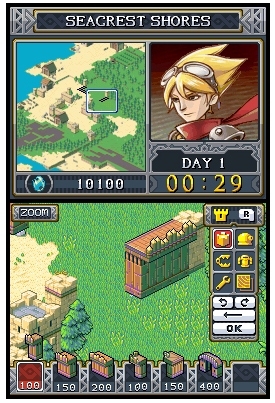 As mentioned above, the all-too-rare cut-scenes are gorgeous, and the common dialogue scenes do the job well enough. The first impressions are great but when you actually get to the core of the game you realise that it’s not the prettiest game on the DS by a long shot. It’s not as polished or vibrant as Pokémon Diamond/Pearl for example, although it does have a very similar look and feel to it. There’s a fair amount of detail in the maps with little touches like ruined fortifications and plant-life, and the settings are nicely varied – from snow-capped mountains to green fields. The enemies are varied as well, with new and more threatening warriors being introduced over time, and most of them are well-detailed and animated. The music starts off promising, but the key track played during the battles quickly becomes repetitive and tiresome (such that I no longer have the sound on when I play the game).

Lock’s Quest is a fairly lengthy game, but in large part that’s thanks to battles being repeated several times on each map, and when it comes down to it your enthusiasm for the game will probably have waned well before the end. There is multiplayer available, which allows you to face-off against a friend and can increase the game’s longevity. There are also little mini-games introduced over time in an attempt to keep the game fresh and entertaining, but they aren’t available outside of the main game, so don’t add much to the overall value.

Lock’s Quest could have been much better than it is but for a number of frustrating control issues that hold it back significantly. The story is interesting and well conceived, the graphics solid if not a little too repetitive, and the gameplay is a strategic mix of action and damage control that makes it an interesting tower defence game, but the gameplay is also the game’s key weakness. The time-limit placed on the building phase removes some of enjoyment that can be derived from carefully placing your structures, and control issues frustratingly plague battles. On the one hand the game is introducing new elements to keep the game fresh, like new turrets and enemy designs, but on the other hand you’re forced to play through each map several times, which can often make the game feel like a bit of a grind. It may be of interest if you like tower defence games, and you’re willing to work through the control issues and don’t mind a lot of level repetition, otherwise this probably isn’t the game for you.