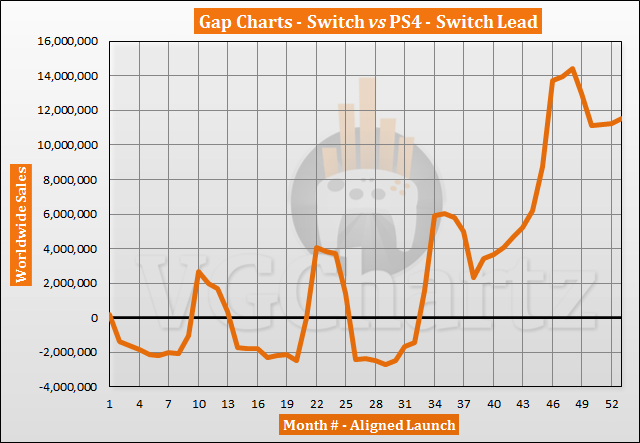 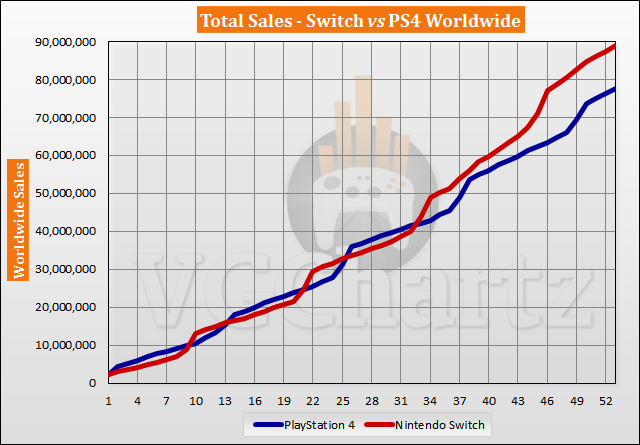 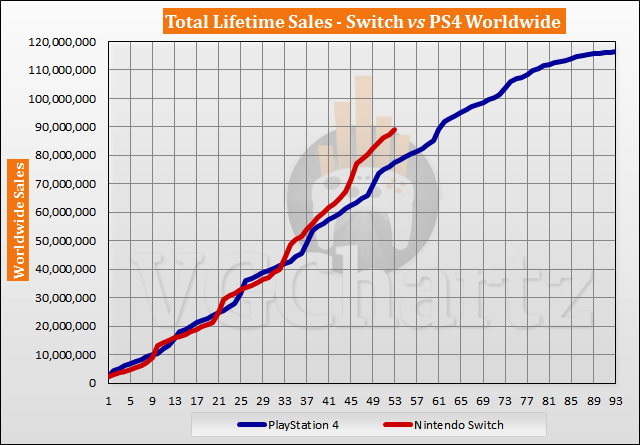 At this rate, Switch will soon have a one-year lead over the PS4

It will. There are 22 weeks left till the end of this year (counting from the beginning of August). In that time PS4 numbers will increase by an additional 5M units and if the NS repeats last year's success, it will sell an additional 15M. That gives the total lead of 21.5M, which is more than PS4s peak year. Even if NS sells half of 2020s units in the same period of time, the gap will be wider than PS4s 2019 sales.

I really hope the Switch smashes this; not because I dislike PS (I love my PS4 - genuinely my favourite PS console and still being used almost daily) but because after the absolute failure of WiiU, I want the world and Nintendo themselves to really remember what makes Nintendo so special in the first place: incredible games. I genuinely feel some of the magic would be lost if Mario, Zelda, Pokémon et al were only playable on PS or Microsoft.

I think they already proved the point though. If not a single switch sold from now on, they already would have a 90 million unit seller in a 4.5 year span.

But pretty much nothing can stop the switch from outselling the ps4 at this point unless Nintendo shockingly released a successor next year. Definitely not going to happen until at least 2024.

And even if it fell short of 120 million, which is nearly impossible, the point is still proven.

So don't worry, no one is going to be doubting Nintendo at least until/if they come out with another poorly selling system. Cube/Wii could have been a fluke. But now it's cube/Wii and Wii u/switch. Nintendo officially has a trend of recovering from poor sales. The Nintendoom stories should be a thing of the last, but sensational articles grab eyeballs. I don't think most people legitimately believe that stuff.

What you said makes no sense. In no way would Breath of the Wild be a worse game on Xbox Series X, it would be a better one. Instant loading, 60fps, 4k, the works.

He said some of the magic would be lost, not that it would be worse.

same thing, that's stupid, the game is the same but BETTER, I don't even look at the box i'm playing on when I'm playing the game

It wouldn't have gyro aiming on Xbox. So instantly not as good in my opinion. Better framerates would be nice, but it's not worth it if you lose a key feature. At least Sony keeps including gyro even if they never use it.

Almost 12M lead to second bestselling home console in history. And the gap will only widen by the end of this year.

The Switch is over 20,000,000 units behind the PS2 in North America. It won't catch up there. Sure the Switch is super popular in Japan (though perhaps beaten by the Game Boy and DS), but home consoles like the PS5 and Xbox are much more popular in Europe and North America. I know MANY 20-30 year old gamers that don't even consider the Switch, it is mostly being bought for children at this point. You can't buy the PS5 and the Xbox on shelves, that is still the largest problem.

Seriously? The 20 million deficit is from this site, go look it up, in the top menu, platform totals.

I'm not blind lol. You make up some nonsense of the Switch being only bought for kids based on anecdotal evidence. That's nonsense.
Also, Xbox is nowhere near as popular as the Switch anywhere.

Xbox is not more popular than the Switch anywhere in the world. Europe is not even close and while Xbox has the potential to compete with the switch in North America, its almost guaranteed that Xbox SX won't come close to Switch's lifetime sales in NA. The Xbox 360 had everything going for it and the Switch has the potential of outselling it in NA, the Xbox SX won't come close to 360's dominance.
The only region wear PS5 will likely win against the Switch is Europe. Outside of that in NA the Switch will likely outsell it and its not even a competition in Japan.

Also, do you have any proof the Switch is mostly being purchased by children? Most data that has come out regarding the demographics of Switch players being majority adults or at least mixed demographics. No different from the people Xbox & PS is appealing to.

Its possible for the Switch to reach PS2's numbers in North America, the Switch at the rate its going in the U.S is on pace to sell around 50 Million.

I would still love a 12 TFLOPs RTX 3060 based Nintendo home console. Give us the same Xbox Series X performance.