Set in the gun-slinging wild west, Desperados III sets you on a path for vengeance. In this real-time tactics stealth game, John Cooper and company will have to use their wits and unique skills as a team to track down and kill the notorious outlaw, Frank. Your cunning, as well as your patience, will be tested as you strategically take out one bandit after another, until your final showdown with the man himself. Steel your nerves, and un-holster that controller, 'cause I have two guns… one for each of ya.

Desperados III opens with you controlling a young John Cooper in a tutorial style mission to get you acquainted with the game, when you and your ‘pa encounter Frank and his thugs. It’s no big mystery here, but your ‘pa doesn’t make it, giving you all the motivation you need to track down ‘ole Frank and give him what’s for. The plot-line doesn’t stray too far from that, and doesn’t really need to. Cut-scenes before and after missions keep the story moving with well voiced dialogue, while also giving you backstory on the members of your crew. Your party makeup also sticks fairly closely to the stereotypical western tropes. But that’s what you came here for - a western - and that’s what you get. 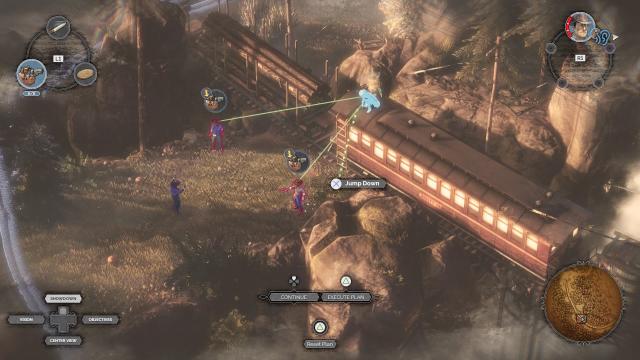 Your vantage point on missions is from an overhead perspective. You can dolly the camera in fairly close to get a good view of the ensuing battles, or pan way out to take a more strategic approach when planning your moves. Essentially each mission tasks you with getting your crew through the map unseen, whether that be following a snaking train through the mountain tops, or crossing the swamps of the Louisiana Bayou. You’ll use environmental hazards as well as your skills to deal with foes, and move from one hiding place to the next in an effort to complete map objectives.

When tackling the challenge of stealth killing your way through missions, Mimimi Productions does an excellent job of giving you a varied team with a diverse arsenal. John Cooper has a knife that he can throw and silently take down enemies, as well as a pair of colt pistols that can be used to set-up simultaneous double kills. Doc McCoy is a hired hand, who lets you know he expects to be paid for his services. He’s your dead eye sniper. He also carries a medicine bag that can be thrown to distract patrols and, upon investigation, will disorient the guard for a short time. Kate is the deceptive beauty who can distract guys with her disguise. Though, in almost every mission she’s in, her disguise must first be reclaimed from somewhere mid-map, making her frustratingly useless half the time. Once you do have that disguise, however, she more than makes up for her prior uselessness, distracting guards or luring them around corners to be knocked out. Hector is your heavy brute - trapping and killing enemies with Bianca, his trusty bear trap! He can also carry two bodies at that same time with no reduced movement speed (crucial when needing to do some hasty clean-up). Last but not least is Isabelle, the Voodooo woman. She can mind-control bandits into killing fellow guards or use her blow-gun to virtually tether two enemies together. Whatever you do to one then happens to the other. 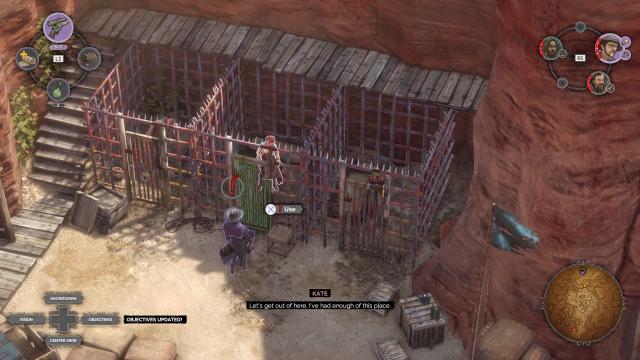 More often than not, you’ll find yourself in a situation where you can’t take out any one guard without being spotted by another, or several. This is where Showdown Mode comes into play. By pressing UP on the d-pad you will enter a pause-time state. Doing so will allow you to set-up multiple kills with each different party member. Executing the plan will resume time and let loose the pre-planned carnage. Most times, all guards within range are dealt with, and you can press on. Other times, you may find you overlooked a guard on a cliff in the distance, who caught sight of your “best-laid-plan,” and sounds the alarm. Should this happen you can either reload and try again, or you can dispense with the silent bare knuckles, knives and traps, and pull out the loud, but easily more effective, guns.

When an alarm sounds all enemies in range will be alerted and have red “!” over their heads and begin hunting you. In addition, extra guards will filter out of buildings and begin to cut you down with lead. Sometimes, there are just too many and you can’t blast your way out, and a reload may be a better option. Then again, pausing time and setting up a multi-kill with Hector’s shot gun, a double kill with Cooper’s pistols, and a well-placed shot between the eyes with Doc’s sniper rifle may be the proper order of the day. How you decide to handle it is up to you.

Make no mistake about it, though, this is a challenging game. Sight-cones and patrol routes have very slim windows of opportunity and leave even less margin for error. I played the entire first chapter on Normal difficulty and came close to hating the game. Thankfully, Mimimi Productions does an excellent job allowing you to scale difficulty, with options for fewer enemies, slower detection rates, and more. After lowering the difficulty to Beginner, I found the game much more enjoyable. Personally, I think Beginner should have been 'normal', and Normal should have been 'hard'. I was still challenged every step of the way, I just got to spend more time completing my plans and stealth kills, rather than trying and failing for the 100th time over a millisecond timing mistake. 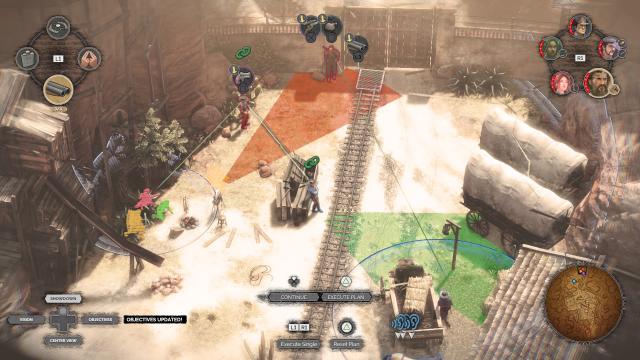 In Desperados III you can expect to die a lot. I mean a lot! It even says so in the written prompts, that “failing and retying is an intended part of the game.” The quick-save system is a core mechanic, used in fact more than your guns... by far. Tapping the PS4 touchpad will create a save file, in a series of three, each one overwriting the oldest. You get into the habit of saving after almost everything you do. Move into position. Save. Kill a guy without being detected. Save save. Clear an entire area and feel great. Save save save. Watch the patrol routes of a new area for 5 minutes, move all your team into position for 4 minutes, execute your multi-prong attack, but one thing goes wrong and you realize you forgot to save - shit, damn, fuck! Then do it all over again. Saving will become routine, so get used to it. Incidentally, missions have a bonus objective of not saving during the whole mission... something I never tried.

While this may sound beyond frustrating, it quickly becomes second nature. Reloading a save file is pretty fast too. So even though you’ll be reloading often, you never have to wait more than a few seconds to get right back into the fray. This method is much preferred to dying and having to redo the entire map over from the beginning. Speaking of which, there are 16 maps in all, and they're huge. Some of the early missions take roughly an hour to finish. Every other map took me approximately 2 hours to complete, excluding the final map which took about 3 hours.

For as long as some of these challenges are, it's a bit disheartening to finally make it to the end, breath a big sigh of relief, and then find there’s a part two and you have to make your way to an additional check point, more than half a map away. 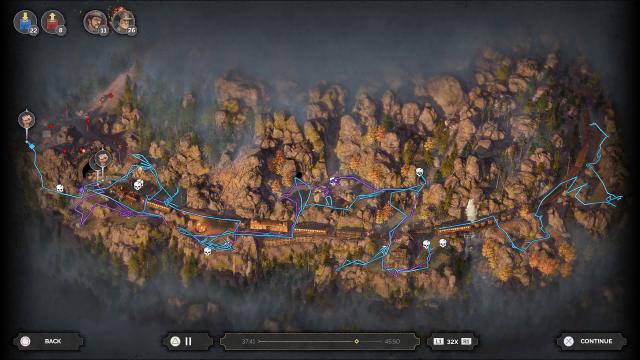 A cool feature upon beating said huge map is a visual mission recap. Playing at up to 32x speed, it shows a plot point graph of the paths each character took, the kills they made, and what mode of death was employed. It offers a fun and interesting look at your past 1-3 hour play session.

Mimimi Productions does a good job tackling the control scheme for Desperados III on PS4. There is a lot to wrap your head around, like panning/dollying/rotating your view while moving your character, which can be cumbersome at first, but once your muscle memory kicks in the controls handle fine. Tapping L1 allows you to cycle through gear, while tapping R1 cycles through your roster of teammates. This functions well, although I did find myself wishing I could cycle forwards and backwards through these groupings, but you can only go forward. Still, it's only a minor inconvenience. Once you get a few more party members, you can hold R1 to select specific characters, in order to have them move as one, or quick select all with the square button.

Keeping track of enemy patrol view cones is essential and done with the left d-pad, revealing the nearest enemy view cone. Holding down the left d-pad and using the right analog stick allows you to mouse-over specific enemies of your choosing. It does seem like a mouse and keyboard could provide quicker feedback, though given you set the pace of the game, there really is no rush, so you can take all the time you need. 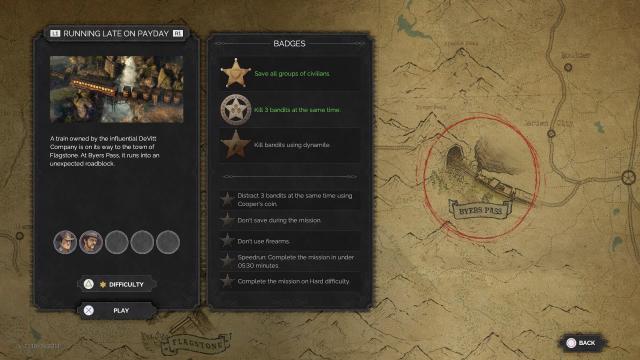 I logged about 30 hours with Desperados III and that’s without going back and replaying anything. Those who want even more of a challenge will find that each mission has badges you can obtain by competing certain tasks, such as finishing with a speed-run time, beating on Hard difficulty, and more. Further still, there are Baron’s Challenges. Midway through the game, a mysterious fellow named Baron starts offering you challenges. These will consist of specific tasks like beating a level with only environmental kills. Baron’s Challenges felt like overkill to me, as you already have 8 badges per level dedicated to just that sort of thing if you’re after replay value.

Desperadoes III does a great job of keeping things fresh throughout the 20-30 hour playthrough. You’ll be drip fed new team members and locations vary from desert wastelands, to dimly lit towns, to murky green swamps, and so on. If you’re a fan of strategy games, you really should give this one a try. Yes, sometimes the try, die, retry system can grind your gears, but more often than not you’ll be enjoying the myriad scenarios in which you stealth kill your way to another victory.

This review is based on a digital copy of Desperados III for the PS4, provided by the publisher. 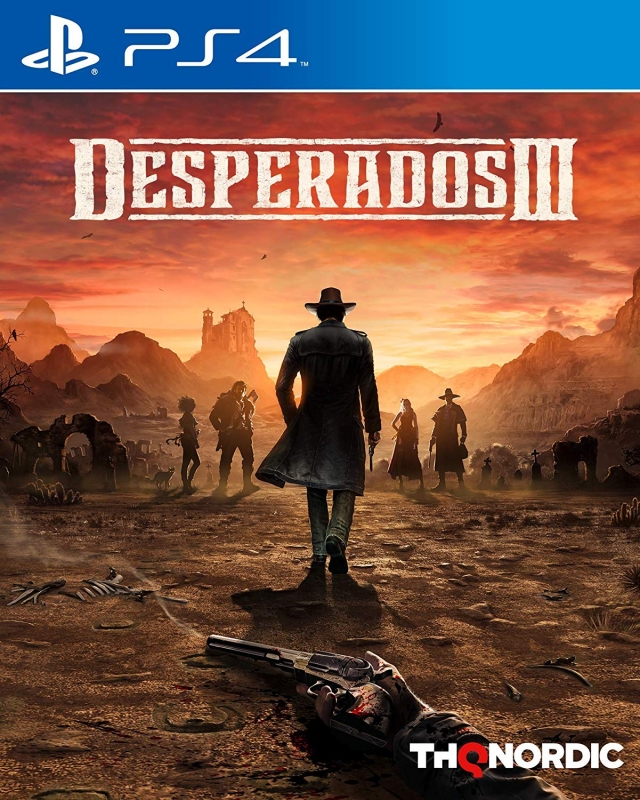