The video game market continues to set new records as many countries worldwide have been in lockdown due to the ongoing coronavirus (COVID-19) pandemic. A new report from research firm SuperData reveals $10.5 billion were spent on video games worldwide in April 2020.

Animal Crossing: New Horizons dominated the digital charts with 3.6 million games sold during the game. Digital sales declined only 27 percent during the month when compared to its launch month in March. It is "now the top Switch title in lifetime digital sales and lifetime digital revenue after only two months on the market," according to the report. 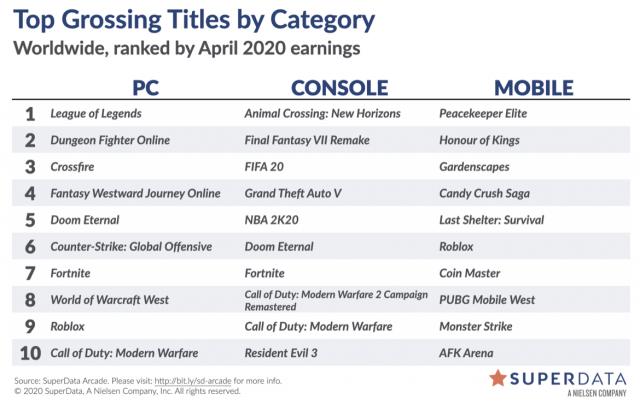 Call of Duty: Modern Warfare 2 Campaign Remastered sold 3.4 million digital units in April. This is up from 622,000 units sold in March, however, it did not release until March 31 and only launched for the PS4. It later did see a release on the Xbox One and PC on April 30.

Spending on online games are also at an all-time high. Revenue for League of Legends are the highest they have been for the game since February 2017. The number of players have also hit a new record. Grand Theft Auto V saw the highest month in money spent on in-game content in April. Revenue for the game is expected to grow in May as it had a free giveaway on the Epic Games Store.

When will the next financial report gets released? Did it get delayed again?