For the first time ever, the popular Hatsune Miku franchise comes to Switch. Featuring 101 songs, hundreds of cosmetic items, and engaging rhythmic gameplay, Hatsune Miku: Project DIVA Mega Mix is a valuable, attractive chapter in the long-running rhythm series — which celebrated its tenth anniversary last year. It's missing some fan-favorite songs and its exclusive features don't make a big difference, but this is still a meaty, replayable package that will deliver dozens of hours of entertainment.

While Mega Mix marks a first for Nintendo's hybrid, it's not exactly a new game. It's essentially Hatsune Miku: Project DIVA Future Tone (PS4) with a graphical redesign, a novel motion mode that takes advantage of Joy-Con controllers, and a "greatest hits" collection of songs. So, if you're a die-hard fan who's already exhausted the huge anthology of tunes on PS4, this Switch installment may prove superfluous. If you prioritize portable gaming, however, or if you're brand new to the franchise, Mega Mix is a great place to start. 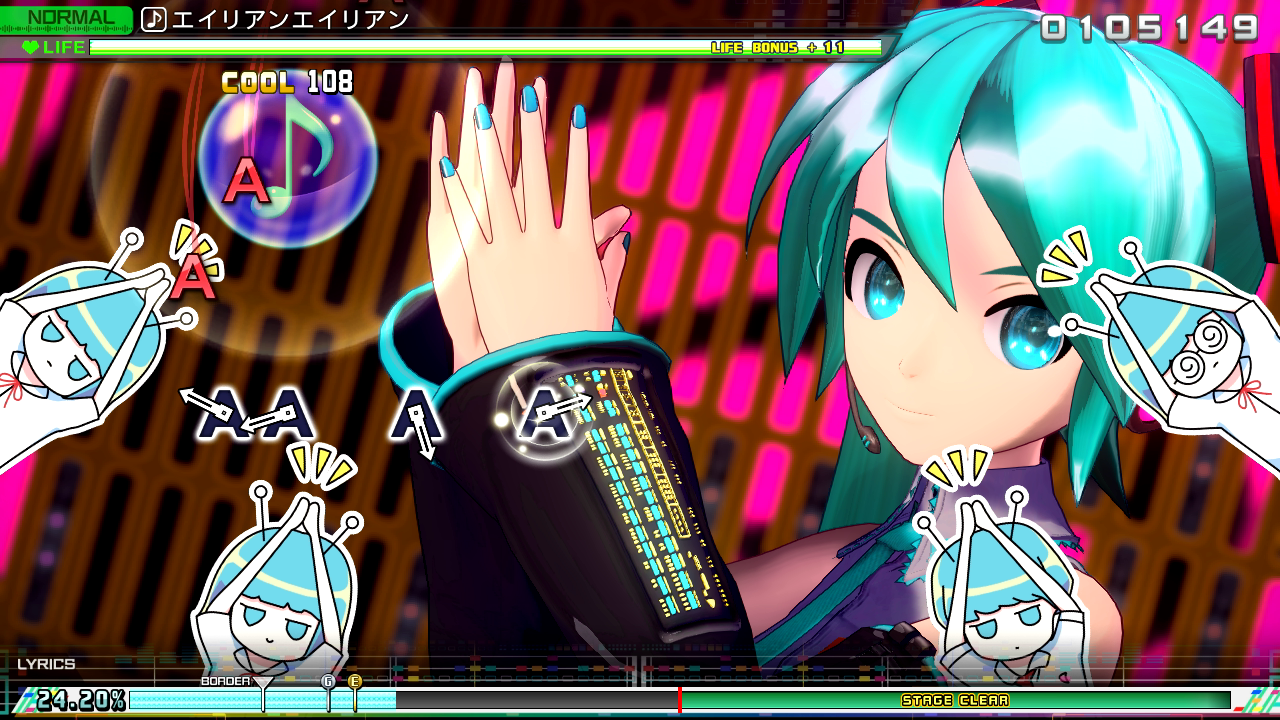 The gameplay principal is simple, even if it can turn downright nefarious on harder difficulty settings. The idea is to match up your button commands with on-screen prompts to the beat of the Vocaloid music. A transparent "A", for example, will appear on screen. When a colored-in "A" swoops in and overlaps with its see-through partner, you press the A button. Perfect timing will yield a "COOL", while imperfect or wrong timing will produce one of the following: GOOD, SAFE, BAD, MISS or WRONG. Achieve enough COOL and GOOD beats and you'll pass the song.

It's an uncomplicated, intuitive system that makes Mega Mix very accessible. Almost anyone can pick up the game — on the easiest setting, mind you — and make sense of it. Yet it also includes five different difficulty options to test the hardest of hardcore video game fans. Hats off to you if you can survive Extreme and Extra Extreme, available only after you've cleared a song on Hard. As a result Mega Mix is easy to learn, borderline impossible to master. With 100+ songs, with several notches of difficulty each, you'll be logging multiple hours trying to beat your high scores. 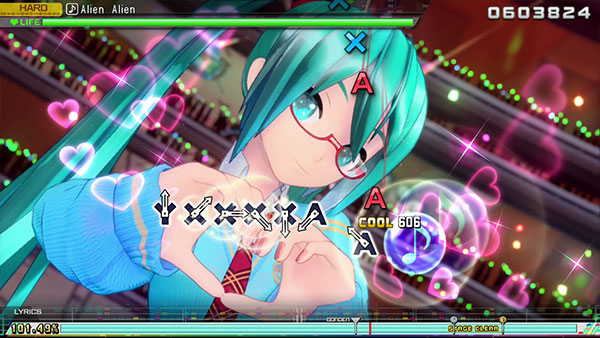 Each song comes with its own dynamic music video, which tells a silly or poignant story and usually features some impressive digital dancing (you can even watch the video without any gameplay if you just want to check out the staging and choreography). The only problem: sometimes the flashy, colorful background videos obscure incoming button prompts, leading to misses and broken combos.

Mega Mix's music videos are fun, but they're also customizable. Each has default singer(s)/costume(s), but you can substitute your favorite idol with any combination of costume, hair, and accessory. Don't like the stock Miku for "Ageage Again"? Try mixing things up with Cabin Attendant hair, a Green Puyo Barrette, and Dinosaur Tail. Every song has a "recommended" module, if you can't decide. All styles, accessories, and modules cost VP, earned from completing songs — another reason to keep coming back for more. 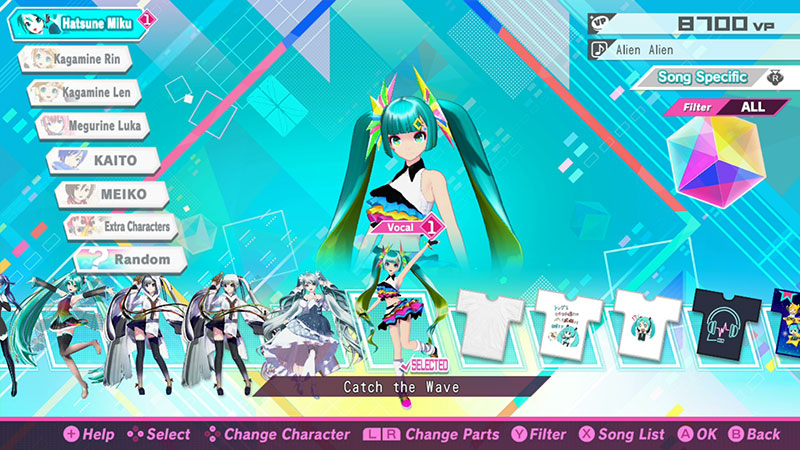 Built off the strong foundation of Future Tone, Mega Mix delivers accessible mechanics, challenging gameplay, and hundreds of cosmetic items. Its Switch-exclusive features, meanwhile, fail to elevate the title. The marquee add-on is Mix Mode, which takes advantage of motion controls. In this mode, you hold the Joy-Cons in a thumbs-up grip, then tilt to move the cursor to line up with onscreen falling bars and nail the note by pressing ZL or ZR. It's great that SEGA infused some Switch-specific flavor into the game, but Mix mode feels like a watered-down version of the classic Hatsune Miku experience.

The other new element is a t-shirt editor, which allows players to customize shirts with a variety of images and colors. With an eraser, a fill tool, a color creator, and a pen with four width settings, aspiring artists can craft custom designs and then place them on Miku and friends during songs. It's a nifty add-on but, like Mix Mode, it doesn't really move the needle. Pro tip: use a stylus on the Switch screen to get the most out of t-shirt editor. 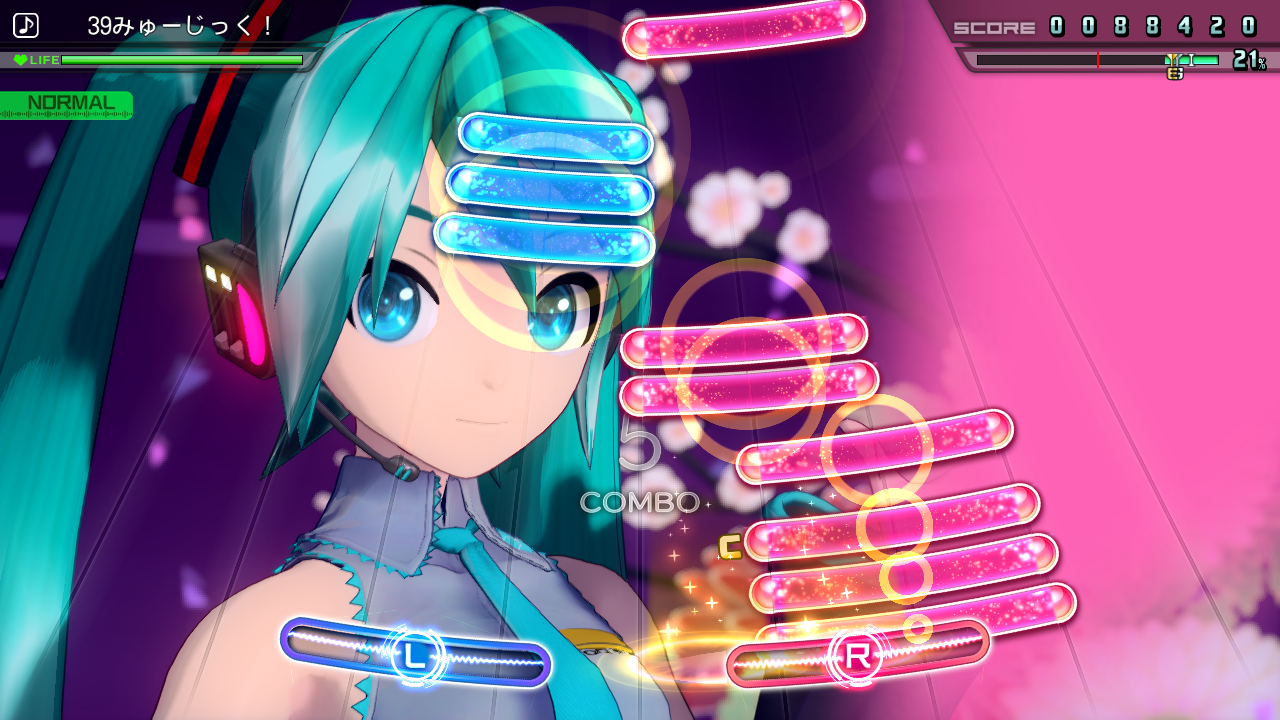 While Mega Mix mostly emulates Future Tone, it doesn't match its predecessor's high number of tunes. All told, the PS4 game featured over 220 songs, which spanned the entire Hatsune Miku discography. Mega Mix, conversely, features 101 songs, including only one brand new song. Now, the idea is for Mega Mix to be just that: a mega mix of the franchise's best and brightest songs. Still, it's disappointing, particularly because SEGA, somewhat cynically, will be selling a handful of fan-favorite songs from Future Tone as DLC for Mega Mix.

Apart from its main modes and cosmetic items, Mega Mix includes a records section that logs data on personal bests and song clear stats and displays worldwide high scores via online leaderboards. It also boasts a flexible button configuration menu where players can change button inputs and even swap out the entire melody icon display for arrows or Sony's triangle, square, cross, and circle layout — perfect for franchise fans used to playing on PlayStation consoles. 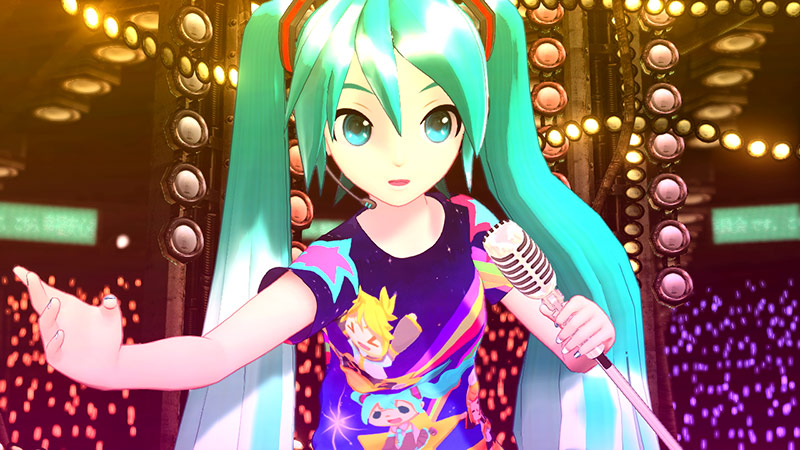 Visually, Mega Mix has walked away from its recent realistic models toward a winsome cel-shaded anime look. Overall, the game is bright, stylish, and full of life. Only some fuzzy graphics in handheld mode dampen the experience.

Mega Mix is a solid celebration of ten years of Hatsune Miku. While its song list pales in comparison to its PS4 predecessor and its novel modes aren't game-changers, its large amount of content, big replay value, accessible mechanics, and expansive customization options make it a fine entree into the series for Switch owners.

This review is based on a digital copy of Hatsune Miku: Project DIVA Mega Mix for the NS, provided by the publisher.

The demo was lackluster. The game seemed like a step down from Project Mirai with its only upside being that it doesn't use chibi graphics.