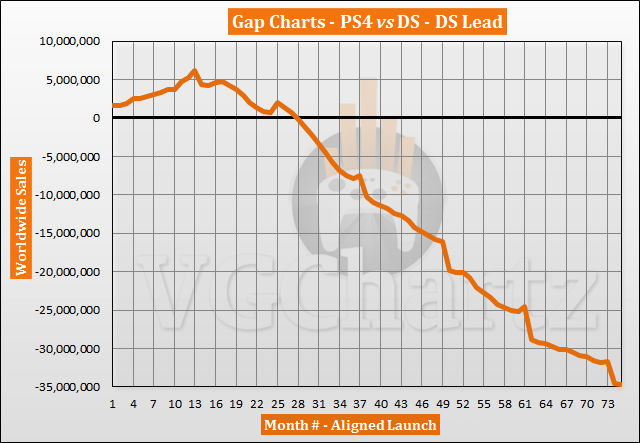 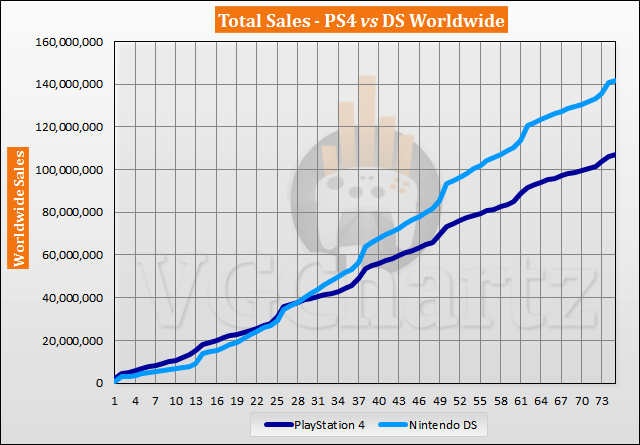 The 75th month on sale for the PlayStation 4 is January, while for the Nintendo DS it is January 2011.

The PS5 will be backward compatible, so it will too much slowdown the sales of the PS4.

The PS4 can't do it. I don't see any hardware ever matching the sales of DS or PS2.

Some here think the Ps4 can but of course it won't

Maybe the Switch if it can keep the high sales up for a prolonged time. But I have my doubts on that.

The only way I could see the success of the ds or ps2 beaten, is if a console becomes very popular in China, which at the moment doesn't seem very likely.

If the PS5 weren't releasing this year, PS4 would probably sell about 10 million this year and begin to close the gap a tiny bit. Since PS5 is releasing this year and is backwards compatible, that should put a dent in what PS4 sales could have been, and it might even come in under 10 million, and the gap might continue to grow. If it doesn't start to shrink soon, PS4 won't even make it to 120 million.

PS4 has sold about 104 million in about 6 years, which is obviously very good. But there's no chance it's selling 50% of that post PS5. We can definitely say never on this one.

PS2 did, but that was 20 years ago in a vastly different market. At this point in its life, PS2 had a virtual monopoly over its generation, whereas PS4 is not even the market leader at the present moment. Due to the shape the market was in 20 years ago, the PS2 still had markets to expand to, while I'm pretty sure the PS4 has already launched more or less everywhere it's ever going to. PS4 is on track to hit about somewhere around 10 (worse case scenario) to 14 (best case scenario) million. PS2 didn't fall to those levels until after 2008.