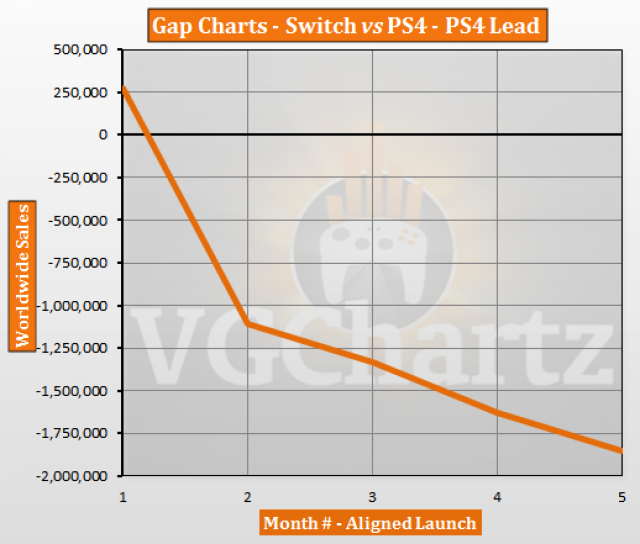 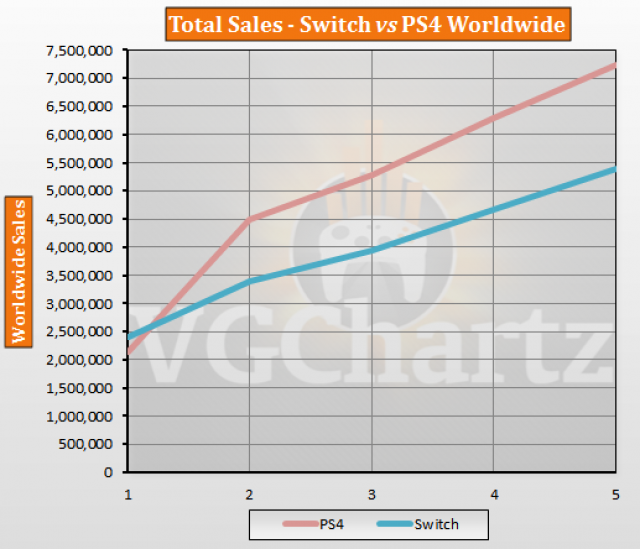 July 2017 is the 5th month that the Nintendo Switch has been available for. During the latest month the gap grew in favor of the PlayStation 4 during the same time frame by 226,880 units. The Switch is currently behind the PlayStation 4 by 1.85 million units.

this may actually be an interesting battle considering the PS4 has a big advantage with launching during the holidays, rather than the Switch in the Spring. Will be curious to see whether the Switch gains ground after this holiday or not given it will be its first Christmas

Someone gave you a thumbs down for this very balanced comment.

If they released Switch during the holidays it would hardly matter because it was sold out everywhere. Same did go for the PS4 which sold a million first week and 90k the weak after. To get back at 900k due to the European launch. Although it will be intresting to see whether the Switch can be on top of PS4 for a little while after the ninth month.

Thanks for saving me from having to type that out. I don't understand why people don't get that. Launching in the holiday season does absolutely nothing for you, because there are only so many consoles that can be produced in a given time. If anything the Switch has the advantage because it will enjoy it's first full holiday sales 8 months into its lifecycle, whereas PS4 didn't get that benefit until a year later.

Still good sales for the Switch, and PS4 was an absolute beast.

The Switch will at least give more of a fight than the Xbox One ever did against the PS4, when supply issues are sorted and games like Pokémon, Mario and Animal Crossing make their way to it, who knows just how close it can keep up.

good numbers for both

At least this will be an interesting race. Good to see that a console can actually offer up some competition to PS4.

I didn't know the aligned gap was that wide. I'm enjoying my Switch, though, and I'm glad it's a much closer race than PS4 vs XB1.

Hopefully it's due to the PS4's holiday launch. I want both to be even closer than they are, competition is always nice.

Ps4 was supply constrained it's first few months so it didn't do big numbers just because of the holiday. It had insane hype.

So was Switch? That doesn't mean there weren't people who bought it just because it was holidays

The fact that the Switch beat PS4's holiday launch is impressive, but the third month onwards isn't holiday sales figures for PS4.

And the Switch is STILL supply constrained, Kero.

And so would Switch. So instead, all we can do is compare their levels of preparedness. And in that regard, Nintendo topped Sony.

You posted that "0 minutes ago" and it already has one like? Kerotan... you like your own posts? Hahahahha. Anyways, Switch was both supply constrained more in its first month than PS4, and PS4's 2nd month was in the holidays hence the huge increase over Switch. Hypotheticals are pointless, they are both selling amazingly but i think PS4 had two objective factors on its side.

Didn't ps4 have absolutely terrible sales in December according to NPD because of shortages? Apparently the xb1 outsold it. People using shortages as an excuse why ps4 is beating Switch need to stop. Ps4 was a different beast.

Not even sure how you arrived to that. Because of shortages on both sides, we can't accurately pinpoint which of the two platforms would have sold more if the supply existed. All we can determine is that Nintendo was more prepared with a larger supply at launch. That's it.

A holiday launch does not matter, because you can only sale as much as you can produce.

PS4 didn't have a global launch. It was only available in NA for half of November launching on the 15th. It didn't launch in EU until the 29 which means it had 2 days of sales there.

What made the difference is that Sony pushed back the JP launch to Feb (aka month 4), and spread that supply across NA and EU to keep up with demand the following months, whereas Nintendo couldn't keep up because their entire stock was spread too thin and being build with mobile components meant they had to fight with Samsung and the S8 launch in April, as well as Samsung preparing the S8 Active and Note for summer / September and Apple with the iPhone 8 and X.

Both were understocked, Sony's plan just worked better and they built a traditional console that didn't have to battery for mobile parts, and there was simply more hype and demand for the PS4.

Great numbers for both.

It will be interesting to see how they fare against each other every time an exclusive gets released. Also, we'll see how the hardware shortages affect the Switch on Holydays.

I think this really shows how beast the PS4 really is.

I'm actually surprised the PS4 is ahead. Then again, Sony had a much higher production rate.

Yet even the PS4 knew shortages it's first months especially in Europe. But the real test will start 2018 since Nintendo should have their shortages sorted out by then. If that's not the case Sony will get a very big lead in very little time.

Sony stretching that lead nicely. Switch is excellent but ps4 on another level.

Eh, it's less impressive when you consider when each console launched and stock issues arising from lack of parts.

You're right ps4 is on another level, (downvotes incoming).

I can't see what's wrong with this comment. Be it due to shortages, better distribution chains, presence on more regions or whatever, a difference close to 2 millions in units sold in a 5 month timeframe shouldn't be disregarded. Switch is doing great, but the PS4 is a monster.

@KileyMc Because it's slightly misguided. Great the PS4 may be you'd be neglectful to mention Microsoft was tanking with the Xbox One at the time. Looking at the PS4/XB1 sales gap to this day tells the story of Sony benefiting hugely off of MS' opening fumble.

@ikepor and Nintendo benefit greatly from neither Sony or Microsoft producing portable consoles. Your point isn't holding much weight in the grand scheme of things.

@ikepor Mm, I seem to recall Microsoft saying that the Xbox One was selling better than the 360 for quite some time, so in that sense it really wasn't tanking, it was just being kicked out of the curve by what was considered as the superior choice at the time. You could even argue that the PS4 had worse odds than the Switch, since it launched at the same time than its direct competition.

There's no correlation to the Switch not having portable competition and it selling well. 3DS had none for nearly a year and Nintendo couldn't sell the thing. Same thing with the Wii U. So your counter point holds no weight at all. It's lack of competition is irrelevant, meanwhile PS4 had competition - inept competition that Sony gained off of. You can look on this very forum to see how many Xbox fanboys jumped ship after the console was revealed.

Yes. Because if someone wants a portable but doesn't want a Switch, they don't buy anything. If they want a home console and Xbox One sucks for some reason, they have two other options to choose from. Considering the PS4 was nearly identical, cost less and wasn't having a PR meltdown, PS4 absorbed a lot of unhappy Xbox fans.

Charts for numbers that aren't absolute

If you don't like Bloodborne, then sell your PS4 because you aren't using it correctly.

Cliched Sony fan reply? Okay. I'll just go back to playing my Switch, and you can go back to being whatever it is you think you are.