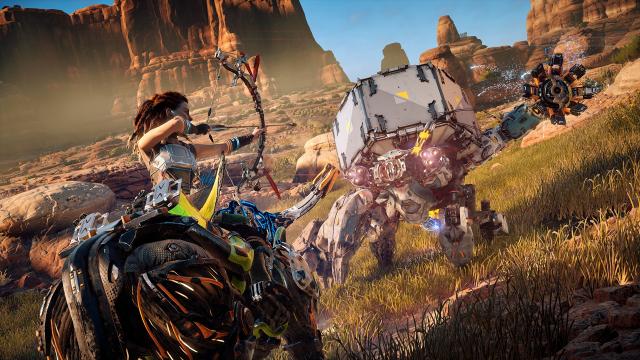 Lovely. Horizion blew me away. Absolutely best new IP (for me) in ages.

@The_BlackHeart__ - Perhaps. It deff looks incredibly interesting and I do like Kojima's style. That doesn't mean it's 100% going to have a leg up over Horizon just because of that and it's later release date/same engine use. That said, it is quite the engine, for sure. Guerrilla should be proud.

Odd that you got downvoted for a single word. That said, it is impressive.

There are dirty trolls everywhere. TheBlackheart got downvoted too. Ha

Plus roughly a million digital sales it seems this game is a moneymaker for Sony. Can't wait to see how the bundle will so this holiday.

1 million digital? has there been any digital numbers shared? Because that sounds a lot.

It deserved it though, but still.

1 million digital? has there been any digital numbers shared? Because that sounds a lot.

It deserved it though, but still.

This game blew me away! Amazing sales for a new IP and my favourite new IP this gen.

One of my favorite game of the year. Got the plat for it and don't regret it at all.

Without a recent NiN console, I've been missing out on Zelda all these years. HZD has filled this void for me. Great gameplay, amazing visuals, and photo mode to compliment it. There is so much potential for this franchise going forward. I'm enjoying it even more than UC4, and just look at its sales.

I hope this means a sequel

Guerilla was talking sequel plans before the game even released; they knew this series is something special. I just hope the next game is from Sylens' perspective. I like Aloy and all, but I really want to see where they go with that character.

the people and player love AAA-Games.

Im glad i bought this game. I feel like a king now.

I really need to get around to buying this.

US vs EU is interesting.
UK certainly likes it.

Considering it had sold 3.4m by April 30th, I'd say 3.52m by June 10th is unlikely. They announced 915k sold digitally so the Ratio has certainly gone up.

"Horizon Zero Dawn. As of April 30, more than 3.4 million copies of the game have been sold. Of those 915,000 were digital sales, according to PlayStation."

On the Horizon Zero Dawn sales page I tried to update the games sales from June 10th to August 3rd. The results were great, more or less.

Total should be well over 4 million now. Should be 5+ million by the time Holidays roll around, and if Sony replaces the Uncharted 4 bundle with a Horizon Zero Dawn bundle for $200 this Holiday, this could be a 10 million seller.

Would say I contributed to that number, but its so out of date that I hadnt contributed yet :-P

Why is this an article? We've known this for at least a month

Plus it's by June 10th, literally almost 2 months ago. What's more silly is the trolls are simply going to read the title, both here and on N4G, and start claiming the game took over 5 months to sell 3 million.

Stunning game! Well done for a new IP. It's selling like a popular franchise title. The next game should do even better since we'll know what we're getting.

Awesome! The holiday bundles are going to be great!

Still battling with Zelda...great. Both games are worthy of GOTY titles imho.