On the surface it might seem strange that Inti Creates' latest game, Mighty Gunvolt Burst, is a cross-over between its Azure Striker franchise and the much-maligned Mighty No. 9.  Yet all signs point to a studio very much in love with Beck, the hero of Mighty No. 9, and his robotic siblings. In May, Inti Creates CEO Takuya Aizu said "this is a labor of love by Inti Creates with characters we really adore."

Mighty Gunvolt Burst takes place in a virtual reality space that's swallowed up both Beck, a self-aware robot, and Gunvolt, a lightning adept. Both heroes must traverse over a dozen levels, defeat robotic bosses, and uncover the mysterious enemy who's twisted this virtual world. 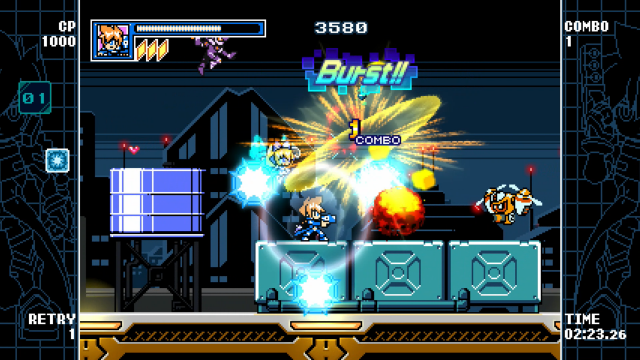 Both Beck and Gunvolt are playable in the game, each with his own unique attacks and story moments. There are a handful of crossover scenes in both campaigns, including the climactic final boss battle. The main thrust of the game is more or less the same across each hero's journey however. Players will pilot either Beck or Gunvolt through stages with peculiar traps and enemies, face off against a robotic boss, and, upon completing each stage, claim a reward.

These rewards come in the form of CP (cost points), gun modifications, and power-ups. Between stages, players can use CP to purchase upgrades like diagonal shots, larger bullets, and longer invincibility frames. Some rewards are well hidden in each stage, but players can activate a dowsing ability that triggers HD rumble when a secret is nearby. Dowsing, along with the game's generous checkpoint system, makes Mighty Gunvolt Burst fun for players of all skill levels. 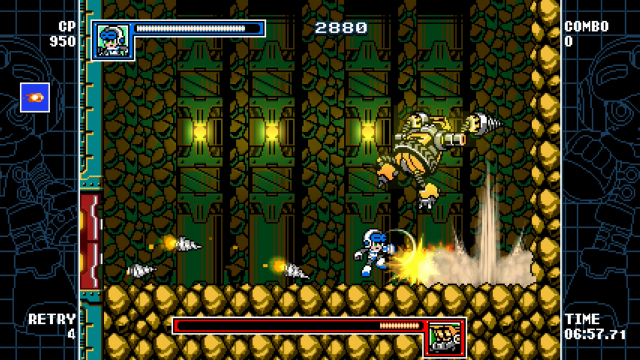 Mighty Gunvolt Burst isn't a terribly long game — players could finish a single hero's journey in a day — but there is a lot of room to replay stages. In addition to two playable characters and lots of secret items to collect, including stickers, the game provides high scores and issues a letter grade upon stage completion. So, if you're unsatisfied with your score or want to unlock a new power-up, you can revisit each stage as many times as you like.

In order to maximize high scores, players will need to take advantage of the game's burst combo system, which rewards aggressive play. By finishing off enemies up close, Beck or Gunvolt will trigger a "burst." Enemies explode spectacularly and players earn extra points. Chain together several bursts in a row and you'll send your high score into the stratosphere. Even bosses can be defeated with a burst. 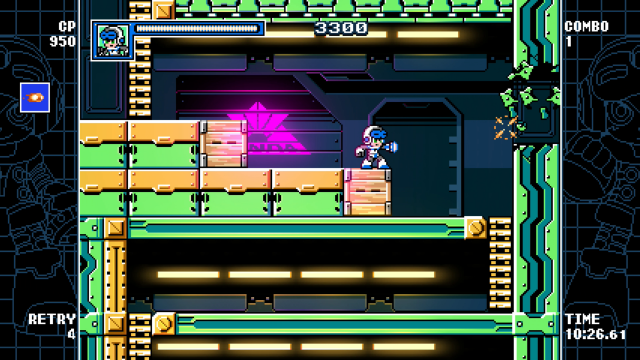 Speaking of bosses, in Mighty Gunvolt Burst they're entertaining, interesting, and challenging. Each has its own elemental weakness, timing, and strategy, which players must study and exploit to emerge victorious. Clearly, Mighty Gunvolt Burst is as much a love letter to the Mega Man series as it is to Beck and his siblings.

Inti Creates' cross-over is a success, in the end. Its short length is offset by high replay value. Its steep difficulty is offset by optional power-ups and frequent checkpoints. Its adopted hero, Beck, removed from the controversy of Mighty No. 9, is allowed to shine.

This review is based on a digital copy of Mighty Gunvolt Burst for the NS, provided by the publisher.

Nice to see you've enjoyed it. I bought it yesterday, so as long as I finish Shantae I'll try this one :)

Well at least Beck is finally in a game that people will like.