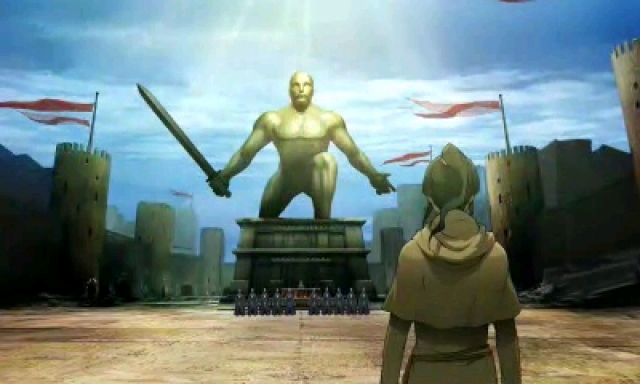 You and your friend Isaachar head to the Eastern Kingdom of Mikado, where young men and women from all around gather to participate in an ancient ritual that will determine who will become the next members of the esteemed Samurai. Isaachar is so pumped, expecting that he'll be selected, but (of course) you are the one chosen instead. You become friends with the other new samurai, mainly Walter, Jonathan and Isabeau, and the truths about the Kingdom and its connection to Tokyo (the series' traditional setting) are revealed. What follows is a journey deep within the heart of the kingdom of Mikado and Japan, but also a journey within yourself, with branching endings that will be familiar to Shin Megami Tensei fans.

The story itself is pretty good and SMT veterans know what they should expect. That said, many new players are going to be coming into this game having played Persona and Devil Survivor and, to those players, it's important to note that it's not as deep as those titles. There aren't any social links and you won't be delving deep into as many characters. If you're expecting that, you may find the story underwhelming.

On the gameplay side, SMTIV can be best described as a hybrid - combining elements from previous SMT titles with newer additions found in the more popular spin-off series. Exploration is now in free-roam third person, instead of a first-person, grid-adhered style. Between areas, you'll move about a map on specific paths, much like you would in JRPGs of yesteryear. The environments that you'll be running around in look nice, but the overworld map is very crude. 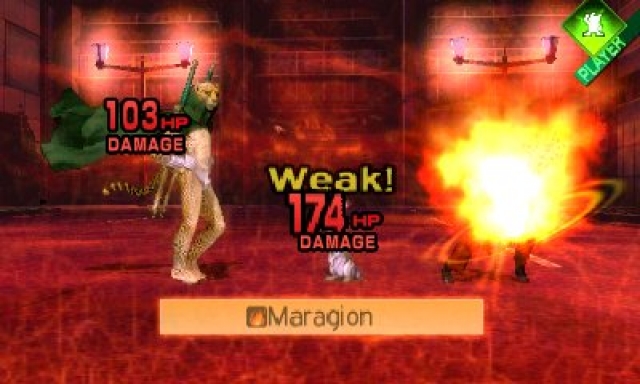 Battles use the Press Turn system that has been featured in several other SMT games. In a nutshell, attacking the weaknesses of the opposing demon will grant an extra turn, while hitting their resistances (nullification and draining) will take a turn away. SMTIV adds a new wrinkle called Smirk. If you (or your demon) hits an enemy's weakness, they might Smirk, which will increase their damage output and reduce their weaknesses through their next turn. But be careful, because enemies can do the exact same thing to you. Exposing your weaknesses could lead to your team's complete destruction.

The battle sprites for enemy demons look very nice, but it's a bit of a downer compared to the full body representations in SMTIII: Nocturne, Persona 3, and Persona 4. This was likely a stylistic decision to give SMTIVan old-school feel. There's nothing wrong with the battle sprites, it just feels like a small step back.

SMT's most famous battle option is talking to demons and it's back again in SMTIV. Like past titles, the demons will engage in conversation with the player and will react differently to the available choices. The demon can join right away, but often will start negotiations with the player, who can give up items, HP, MP, or even sacrifice a demon in the party to satiate the new demon. The demon's personality plays a role in how it will respond, so it's not a completely random process. However, it can be frustrating early on as you learn which demons have which personalities and what choices are the best for each situation. One neat addition is that when you select a demon to talk to, a full screen image of the demon appears on the top screen, instead of simply an indicator (as was the case in Soul Hackers and other previous titles). 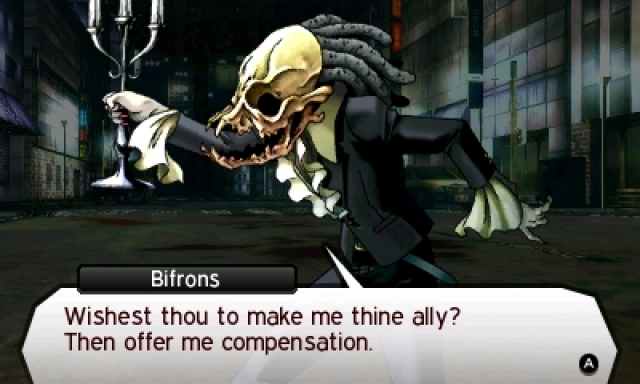 Demon fusion is the staple of the entire series. In SMTIV its ease of use has been improved. Mido, your pixelated host in the Cathedral of Shadows, will offer his top three recommended fusions every time you visit. So if you're confused by the demon fusion process or just want to get back to the game quicker, you can pick the recommended fusions. If you want to dig deeper, there are a variety of different search options that allow you to search for the exact kind of demon you're trying to create (helpful if you're stuck on a boss that favors a certain type of attack or has a specific weakness). You can't fuse demons above your current level, however, without purchasing a certain app.

Sometimes, your Samurai compatriots will assist in battles, however they aren't worth much. They'll throw in an extra attack or magic spell but they generally pale in comparison to you and your demons and their best use is as an extra damage sponge. 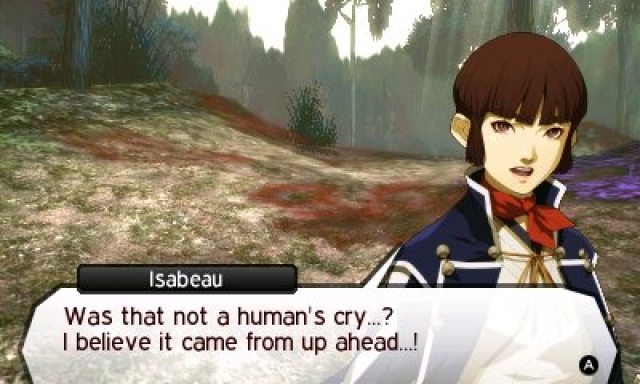 As your player character levels up, you are given stat bonuses that can be placed into either Strength, Dexterity, Magic, Agility or Luck. Given the MP decision I mentioned above, I focused mainly on Magic, though Strength will be needed if you go physical and Dexterity is always a nice stat to improve regardless of your focus.

Assisting you in your adventure is a seductive-looking AI woman named Burroughs. She manages your apps, which are add-ons you can purchase throughout the course of game. You get 10 app points at each level up and they can be spent on various additions. You can increase the number of skills the player character or demons can learn, recover HP and MP while walking, expand how many demons you can hold, decrease MP costs, improve demon negotiations, fuse during battle and more. The app system is a fun way to customize your SMTIVexperience as you see fit, to give you the best chance of surviving the hellacious difficulty.

And it is certainly difficult. No matter how good you are, expect to suffer some full party wipes early on as the enemies will show no mercy. If you struggle with this difficulty, you can unlock the easier difficulty mode (Fellow) after dying twice and being revived. The difficulty in Fellow mode is akin to that seen in Persona 3 or 4, which will be a comforting feeling for those new to the SMT mainline series. You can switch between Fellow and Prentice at any time if you're ever looking for maximum challenge. 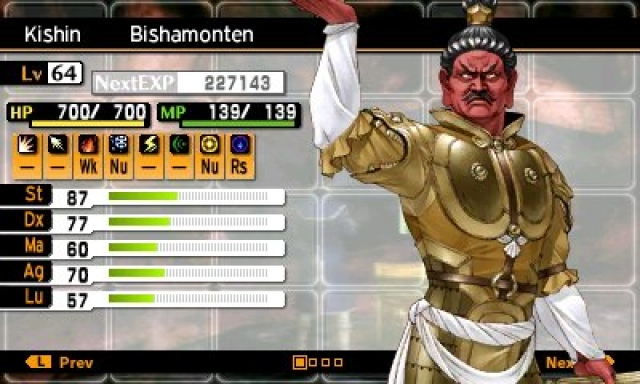 Outside of the main adventure, you can take on various quests of varying degrees of difficulty. They'll net you more Macca and items and keep completionists busy. Depending on how many quests you opt to do (and your chosen difficulty mode) I could see it taking anywhere between 40-70 hours to complete the game. Fusion via StreetPass is also possible. 3DS handhelds in sleep mode can exchange demon cards with other players. You exchange Digital Devil Service cards via StreetPass and depending on which demons are on those cards, you may be able to perform special fusions to create new demons.

The soundtrack is spooky and appropriate. Persona's main composer, Shoji Meguro, is absent, but the game's soundtrack is in good hands with Ryota Kozuka, who contributed some songs to the Persona series as well. Voice acting is again solid - Atlus has traditionally done a good job in picking voice actors. There are no alternate languages (as with most Atlus titles) but the English dub is still good, and if you really don't like it you can turn off voices in the options. 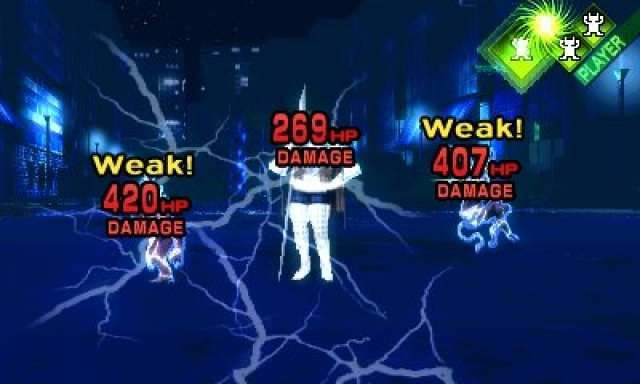 Shin Megami Tensei IV brings the mainline series back on the market. It gives hardcore fans exactly what they want while also successfully drawing in players that used Persona as a gateway game to the series proper. Some compromises have been made to accommodate new players that may annoy some of the core players, and newer players will have some difficulty adjusting to SMTIV and its differing approach to storyline, but as a total package, SMTIV does a lot right and is definitely worth experiencing, even with the $50 price tag.

This review is based on a digital copy of Shin Megami Tensei IV for the Nintendo 3DS provided by the publisher.