The next generation PlayStation console is finally upon us and, as with most launches, it's been a bit disappointing on the software front. Like the PlayStation 3 launch, however, Housemarque have put their best foot forward as Sony's Great Indie Hope at launch with Resogun, the PlayStation 4's Super Stardust equivalent. 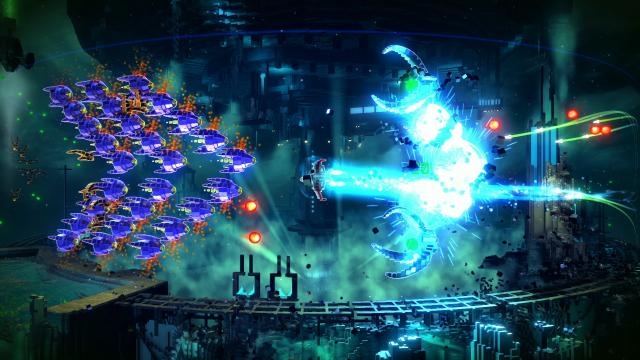 Like many 2D shoot 'em ups, Resogun doesn't really have much in the way of a story. Your goal in each level is to save the last humans from some aliens... or robots... or maybe they're robot aliens; it's not really clear. These humans are less of a plot point, though, and more of a gameplay mechanic as saving them is not direly necessary but gives nice temporary - and sometimes permanent - bonuses that can help you get through a level. Trying to fly over to a recently-released human and transport him to safety in the middle of some of the more hectic later levels is quite a challenge. Sometimes it even seems as though the humans die mere seconds after you're warned about them being in danger, which is a little irritating, but otherwise it's a fun additional mechanic. All that said, don't go into Resogun expecting to become all emotional as the last human looks up to the sky and dies on his/her own; it's just not that type of game.

In the absence of a compelling narrative, then obviously the gameplay has to step it up to retain the gamer's interest, and Resogun does just that. Where Super Stardust's levels were all spheres and you protected a planet from asteroids, Resogun's levels are all cylinders, which means you can move in any direction around your confines. This also means that the level itself is not a source of challenge like many other games in the genre and the key to keeping things interesting is enemy variety. In fact, the level design's only real effect seems to be on the humans you're attempting to save - once free they'll run around on the ground until an enemy comes to re-capture them, but if they're freed near water, lava, or a drop into the abyss then they'll die fairly quickly, meaning you have to keep a closer eye on them than you otherwise would. 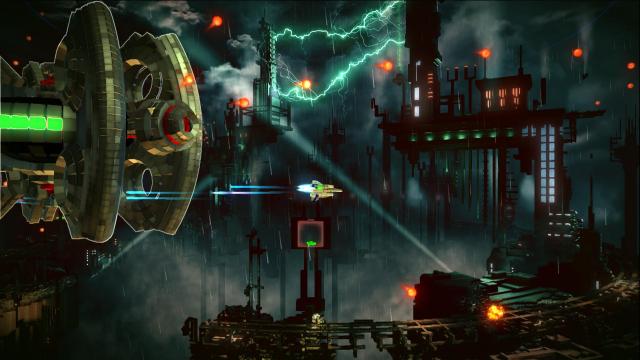 As you make your way through Resogun's five levels you'll come across numerous different types of enemies, which requires you to change up your strategy a fair bit. When it comes to forcefield generators, for example, you must take out the correct part of the generator or it'll be projected even further. Boss fights are also a definite highlight, consisting of multiple stages and forcing you into some pretty tough situations. The final boss in particular is a real tough cookie which should take you quite a few tries on the Experienced difficultly setting (at least it did for me). Most of the enemies don't require such targeted attacks, though, so the best way of simply staying alive is dodging everything that comes at you.

Bombs and a massive laser blast ability are both useful in a pinch but what will probably get the most use out of the dash (used with the L1 button), especially in tight situations. Not only does the dash allow you to move much faster than you normally would, but any enemies you barrel through will be instantly decimated. The downside is that you'll sometimes die just as the dash ends, but if you continue dashing until you reach a safe location you should be fine. The cylindrical form of the levels means that you can see the entire level on the screen at all times, making it easy to plan ahead.

Planning ahead isn't the only benefit of the tubular level design; it also lets you take in all of the presentation beauty at once, which is definitely something to behold. Seeing so many enemies on screen at once all bursting into hundreds of tiny little boxes as they die, with upbeat electronic music thumping away in the background, makes for a very entertaining experience. I just wish there were more levels and bosses in total. My first playthrough on Experienced difficulty only took me 2 hours, and a disproportionate chunk of that time was spent on the final level. It's all a bit poor on the value front, especially for a $15 game. On the plus side, this is definitely the type of game you can play through more than once and still enjoy. The other plus is that for many this game will come free with their subscription to PlayStation Plus, but until a game is free for everyone the price has to be taken into account for review purposes. 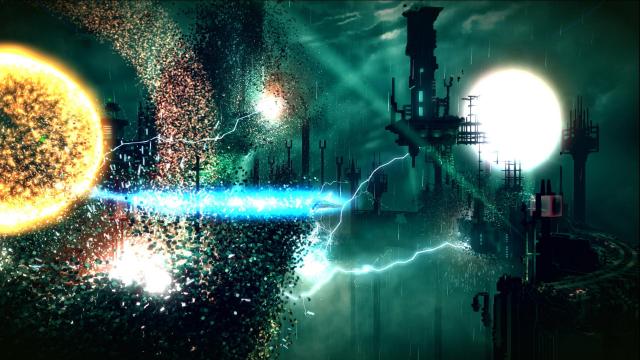 So, is Resogun the PS4's launch line-up savior? I don't know if I'd say that, but it certainly helps. It's a great game that only really suffers from not featuring enough levels, but it does have fantastic presentation and some interesting gameplay mechanics. Some may find it odd that an indie game is thus far the best exclusive game on the PS4, but I'm glad to see Resogun earn that honor. Hopefully it isn't too long before Resogun is dethroned, but for now I'll just continue fighting the good fight for all of humanity.