Many people are aware of South Park. It's undeniably one of the most controversial TV shows around, and that's why I like it. Because of my love for the show, I was really excited when Trey Parker and Matt Stone announced that they were working on a video game based on the controversial cartoon, but we live in a time of awful licensed games that absolutely milk their respective franchises, so I was at best cautiously optimistic. Now that I've played it, I'm pleased to say that this is one of the best licensed games I've played in a very long time. 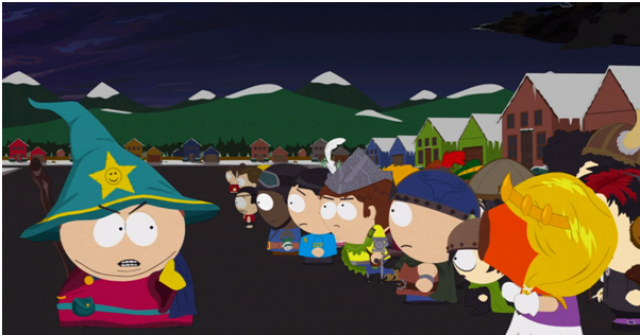 Unlike many licensed games, it is clear that South Park: The Stick of Truth is not shovelware; it was created with heart and passion. There's clear effort weaved into every corner of this adventure, from both the guys over at South Park Studios and developer Obsidian. They wanted to produce the South Park game that fans have always dreamed of and, even though it is not flawless, they truly succeeded in their task.

You are the new kid, a mysterious child who has the ability to quickly make friends and is a skilled fighter. When you arrive in the small country town of South Park, you're thrust into a never-ending battle between the Humans (led by everyone's favorite asshole, Cartman) and the Elves (following the lead of Kyle). They're fighting over the most famed relic in the universe, the stick of truth, for whoever controls the stick controls the universe. In reality it's a make believe game the kids are playing. However, it wouldn't be South Park if the situation didn't completely spiral out of control. It's an enjoyable narrative. The progression of the story makes sense and the conflict between the characters is true to the show and their personalities. It comes together to create a highly enjoyable and cohesive story that has great pacing.

You can customize your character, which many will appreciate since it definitely helps you immerse yourself in the game. There are a wide variety of different clothing items and hair styles to pick from and after that you're thrust directly into the game.

Something that is immediately apparent as soon as you enter the town of South Park is its aesthetic design. In the same way as Uncharted or The Walking Dead are strengthened by their stories and characters, the presentation is The Stick of Truth's greatest asset. I know it sounds ridiculous for people to say that it feels like the show, because it's a video game, but it really does in every conceivable way, and that's a great feat. The animation and art style perfectly encapsulate the feel of South Park and the cutscenes are uncanny (they look as though they are part of a South Park episode). The developers have done an excellent job of making this game feel like a real part of the South Park universe.

That of course would not work if it wasn't combined with hilarious writing and great voice acting. This is hands down the funniest game I've ever played. It left me in stitches frequently, even more so than some of the actual episodes from the TV show. One of the best aspects of the humour in The Stick of Truth is its heavy satire of video game tropes. One of the best running gags involves audio logs and the illogic of people recording them when in significant danger. The humour permeates throughout the story, within the cut scenes, and contextually. The way they incorporate this with the gameplay mechanics is smart and effective.

But that's just the thing. If you don't like the humour of South Park, it will be very difficult for you to try and push through the game, because the insane toilet humour, outlandishly offensive content and social commentary never ends. I'm not easily offended, so I don't really care when characters makes insensitive jokes, but some may find the content too offensive to bear as it can really push the limits of good taste. 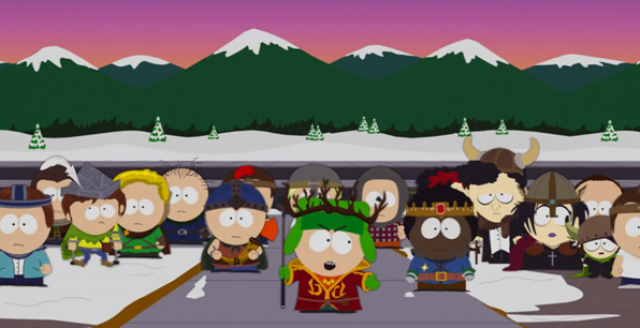 Those who appreciate a game with a large amount of fan service will be happy to know that The Stick of Truth has got you covered. You'll hear a lot of references to previous episodes and some iconic lines, but this is done sparingly, which is great. Because The Stick of Truth doesn't use too many quotes from the show, it makes for a more engaging and original feeling experience, instead of being just a lazily slapped together game filled to the brim with quotes from the source material. You'll be hard pressed to think of a single character from South Park that doesn't at least make a small appearance in this game. You'll see all your favorites like Randy and Mr Mackey, but you'll also encounter recurring characters like Al Gore and even Morgan Freeman.

The soundtrack also matches both the show and the style of the video game perfectly. It blends the crescendos and loud bass drums from the over the top South Park episodes (which is basically all of them), with more medieval battle music similar to what you may hear in RPGs like Skyrim or Dragon Age.

The levels themselves become more entertaining as you progress through the story. The early battlegrounds are pretty basic, with fights taking place on the streets and in the school, but they become more interesting as you progress. You'll start fighting rats and bacteria in Mr Slave's intestine, and battle in a hilarious level where you're shrunk down to the size of a coffee mug and forced to fight gnomes on your parents' bed while they're having sex. That level even involves a mini game where you have to dodge your father's hairy nut sack as it swings towards your character.

The gameplay essentially brakes down into combat and exploration. Unlike a lot of RPG's as of late, after the short tutorial which teaches you the basics of the combat system, the game completely opens up, allowing you to explore the entire town of South Park, from the School to Stan's house and even Stark's Pond. In many of these areas, you can find optional side quests to engage in, many of which are highly enjoyable, though some of them are just very basic fetch quests. Unfortunately, the map is an absolute mess. As a 2D game with 3D exploration, the map itself becomes difficult to read as it is displayed in an awkward plane that is highly cumbersome. 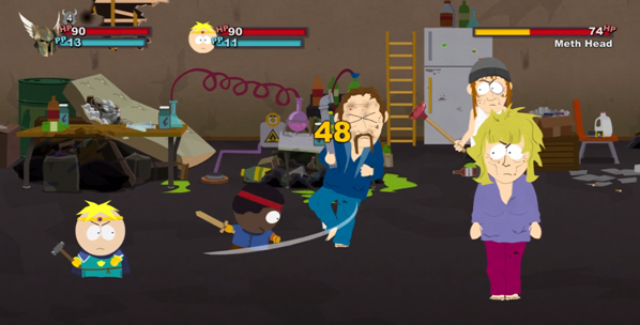 A lot of people will have been sceptical of the turn based gameplay, but it's actually both enjoyable and surprisingly deep. The Stick of Truth changes up the traditional turn-based formula and makes it a more involving experience. For example, when using a number of attacks, the game requires you to make inputs to increase the damage caused. Missing these attacks can be damning, especially when facing more challenging characters as you progress. At the same time, when you are attacked, you can block attacks with correct timing, which eliminates some of the damage. All of this keeps you involved with the action. Unfortunately, some of the quick time event based attacks are very poorly implemented, and these make up the worst parts of the combat system.

You can choose between four classes: Fighter, Mage, Thief and, of course, the infamous Jew. All of these classes use different weapons, varying armor and equipment, and have different special abilities, all of which can be upgraded through a fairly simple but effective skill tree based on your level and number of friends. The skill trees allow you to put certain buffs on equipped items, such as increased damage or elemental debuffs, which will then take effect in combat (such as causing your opponent to bleed out or freeze). It should be noted, however, that The Stick of Truth does a poor job of explaining what attacks and buffs should be used on different opponents, which can definitely lead to some aggravating trial and error deaths. 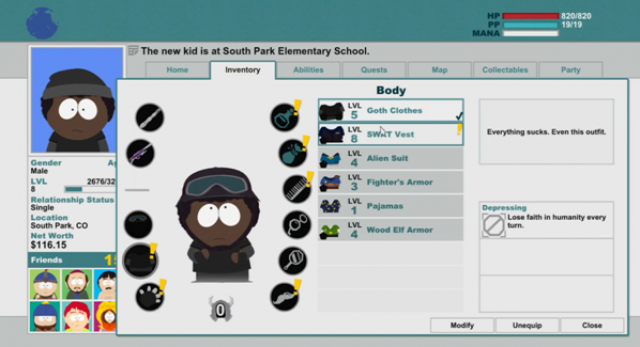 By making friends, you can also upgrade your character, and this is essential later down the line. Many of the upgrades are simple percentage boosters, though. The gear you're wearing also has an impact on your stats, from basic things like how much damage will be reduced to how effective certain weapons may be.

There is a lot of depth in this customization, which links well with the combat (specific attacks may be weaker or stronger depending on the character you're attacking, which adds a layer of strategy to the combat and forces you to vary your attacks). The magic abilities are also great. Your character learns a number of magic attacks throughout the game that require mana. These attacks are essentially farts, which can be used on their own or in combination with your weapons. The game also serves as a good test of resource management. There are a number of items that can be used during fights. These vary from the generic health potion (which are cheesy puffs) to damage buffers. Using these at the right times can be tricky, especially later in your adventure.

During most encounters, you will have a party member with you, such as Stan or Cartman. These characters also have their own unique abilities and weapons. However, the variety of attacks they can use is somewhat lacking. When tackling side quests, you will also meet characters who can then be summoned into combat to deal massive damage. These range from characters such as Jesus to Lu Kim from City Wok. All of this combines to create a gameplay experience that can be very challenging and deep. 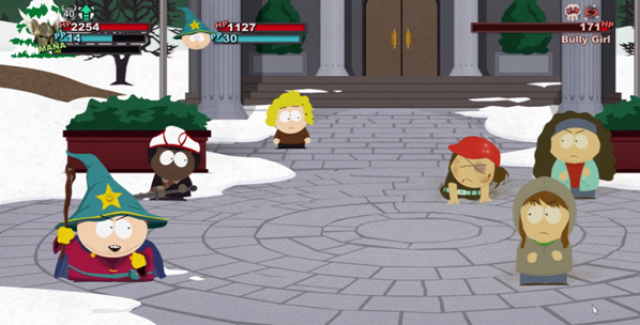 However, The Stick of Truth is far from flawless. The most glaring problem is its length. It is short for an RPG. I completed the main story in 10 hours, which may sound long, but it's really not for an open world game or an RPG. I didn't rush through it either; I completed a number of side missions and usually took my time in the levels, exploring the carefully designed stages to see what hidden details the developers had managed to cram in. And I can't really say that there is excellent replay value either - you can play as different classes, but the combat is still essentially the same, just with a few different items and moves.

The PC port is somewhat subpar as well. It runs well and the framerate doesn't dip, but a 2D game shouldn't really be slowing down on a gaming PC. The PC controls are finicky - some of the button mapping makes no sense and you can't rebind keys, which is pretty awful for any PC game in this day and age. For example, out of combat, you can alternate between some powers to interact with context sensitive areas, but these aren't mapped to the number keys, which makes no sense and demonstrates this was a design choice due to the limitations of a console controller. The option menu is very limited too, and the inventory screen is both clustered and unintuitive.

These problems aside, I look back on my time with this game and realise what a blast I had. The presentation is definitely its biggest asset; the art style is fantastic, the story humorous, and the combat surprisingly enjoyable and deep. It's a short adventure, and will only appeal to those who like the show's crude humour, but if you are a fan of South Park then this is definitely one licensed property you won't want to miss out on.

This review is based on a digital copy of South Park: The Stick of Truth for the PC