As empty as a lost bottle found in the ocean.

Rare, a studio whose games I enjoyed immeasurably as a child, is not back to form quite yet. Sea of Thieves is the closest the developer has come to the glory days of old in quite some time, and in some ways it is an amazing game, but there are just too many flaws and it's so lacking in substance that I couldn't help but feel disappointed. Have you ever heard of the expression, when looking through houses, “it has good bones?” If so, you probably already know where I’m going with this. 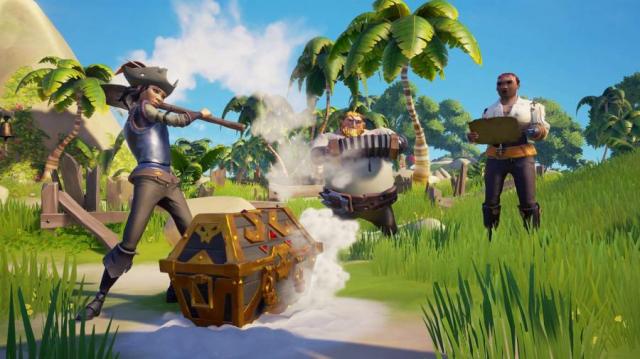 Sea of Thieves has the basis for an amazing gaming experience. The art style, realistic ocean waves, vast open world to explore and discover, lack of radar (and therefore a never-ending sense of anticipation and excitement about what is around every corner), and a number of other features make this look, at first, like an incredibly fun game to play. But play for a little while longer and you'll realize that there's not much else there to hold your attention. I eventually started to feel the emptiness of the world in regards to both the number of players I encountered as well as the amount of meaningful NPCs and enemies I met. Both the helpful characters and the ones trying to kill you are bland and forgettable.
The game centers on your hand-picked pirate (which unfortunately is barely customizable). You then log in and either play by yourself or play with a small group of up to three other players, and set sail on the high seas. At first, it's a lot of fun, but I quickly realized I was enjoying it partly because of what I expected would happen next. I was waiting for something like the dynamics in Assassin’s Creed: Black Flag, where you work with your crew of fellow pirates, building relationships, taking part in quests, being treated to moments of dialogue and story-focused cut scenes, upgrading your ship to become more powerful (not merely acquiring cosmetic upgrades), challenging other ships and crews that are at a similar level and obtaining rewards for defeating them, and so on.
I was expecting tangible rewards that would offer interesting new features or places to explore, and which would add a sense of progression to your adventuring. I wasn’t expecting an implied message - one felt throughout the game- that more or less said "work in progress". 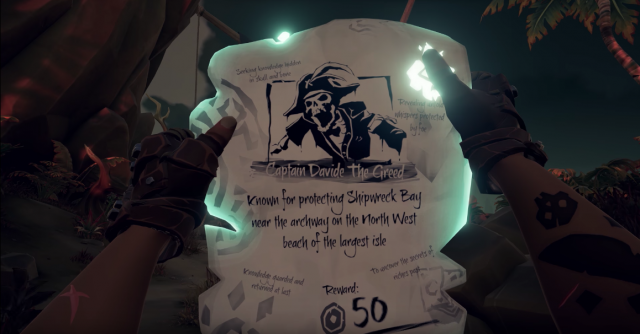 I was at least expecting some narrative thread. Black Flag had an amazing story, in my opinion; the best one in the franchise, and Sea of Thieves, by comparison, is just shallow. What is the point in it? What you end up doing in each play session is randomly hopping from island to island, which feels about as fun as going on a voyage of various planets in No Man’s Sky (namely, plenty of fun at first, but the novelty quickly wears off).
You'll find treasure on your target island, will fight against skeletons (and potentially other players) using a fairly simplistic combat system, safely store aforementioned treasure in your ship, take it back to an outpost, and finally turn it in so that you can level up. That's pretty much the core of Sea of Thieves. 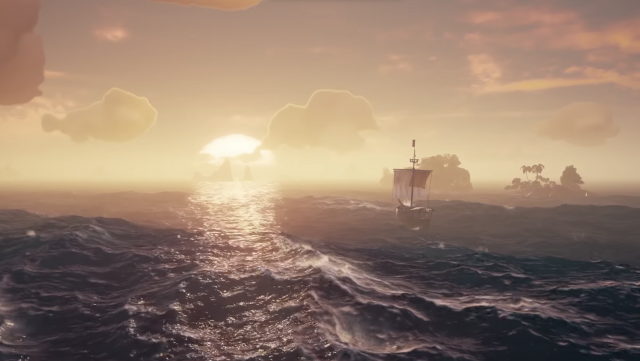 Disappointingly, your reward for maxing up your levels is basically a "stay tuned for further updates" message. Excited? No, me neither. Over and over again I’d hear people talk about (rather excitedly) the fact that if you hold the melee sword button it will allow you to move quickly over the water before you start swimming, allowing you to sort of catapult your character. If people are excited about that, what does it say about the rest of the game? I rarely if ever heard talk of amazing fights and encounters, or a stunning sequence of events, or the discovery of an awesome treasure.
And so the game becomes dull rather fast. Usually, when I’m bored this quickly by a game it's because of a pacing issue; I've just yet to get to the good stuff, the true meat of the game. With Sea of Thieves, there isn't any meat. In many ways, it feels like something more attuned to gaming late 90s or early 2000s, with some added modern bonuses. 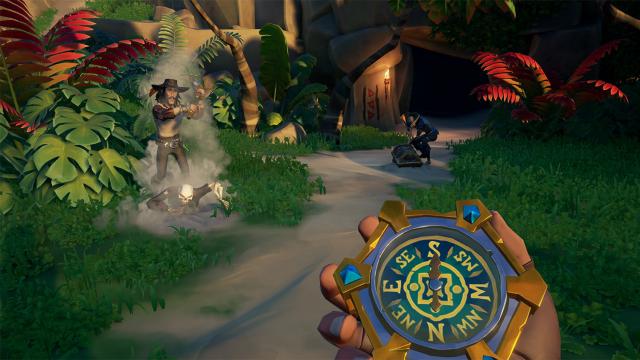 On the upside, I can’t help but be amazed at how intriguing the world looks. I was in awe of the storms, the Death Eater-like skulls in the sky, the ominous waves, and the never-know-when-something-is-going-to-go-wrong feeling that you have while playing. It's just a shame it's so shallow and that there's rarely anything captivating beyond the art style. The game would work better, I think, if it was an MMORPG, with literally hundreds if not thousands of other players around you at all times in constant battle. Other ships were quite rare in my playtime, and battles were rarer still; most of the other ships I saw simply fled or weren't crewed by other players because they were busy treasure hunting on a nearby island. Sea of Thieves would be more enjoyable if it encouraged a greater sense of group comradery and shared goals, rather than focussing on individual player levelling.
I think it's clear that Rare created this game with the intention of adding a lot to it over time. Hopefully it will receive the same treatment that the original Splatoon received. If you played that game early in its life and then again a few months later on then you'll know that a lot of features were added to it post-launch and it became a much more rounded package as a consequence. Sea of Thieves is a game that, I believe, with a lot of extra development time and additional content, could be great one day. Right now, however, it's about as empty as a lost bottle found at sea. How I wish, upon looking inside the bottle, that there was something valuable within. Presently, there isn't. Despite all of my criticisms, however, I remain hopeful that time will do Sea of Thieves justice and maybe one day it will be worth revisiting.

This review is based on a digital copy of Sea of Thieves for the PC, provided by the publisher.