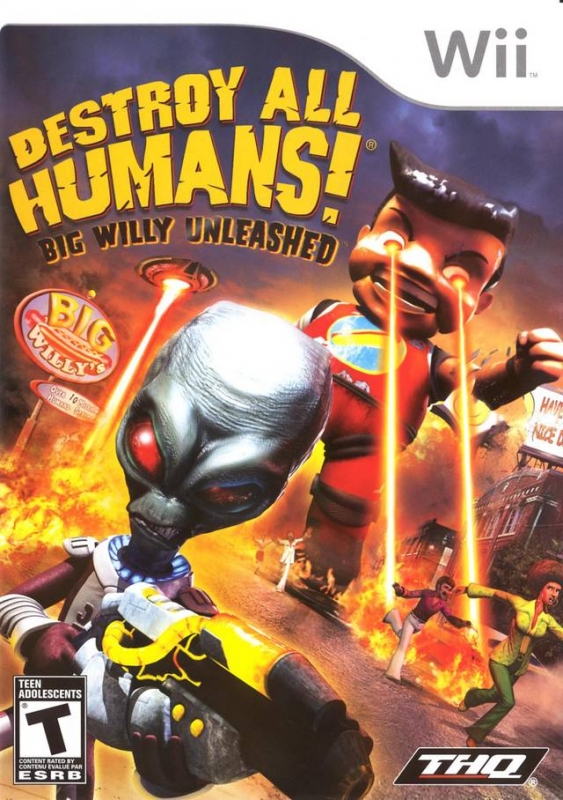 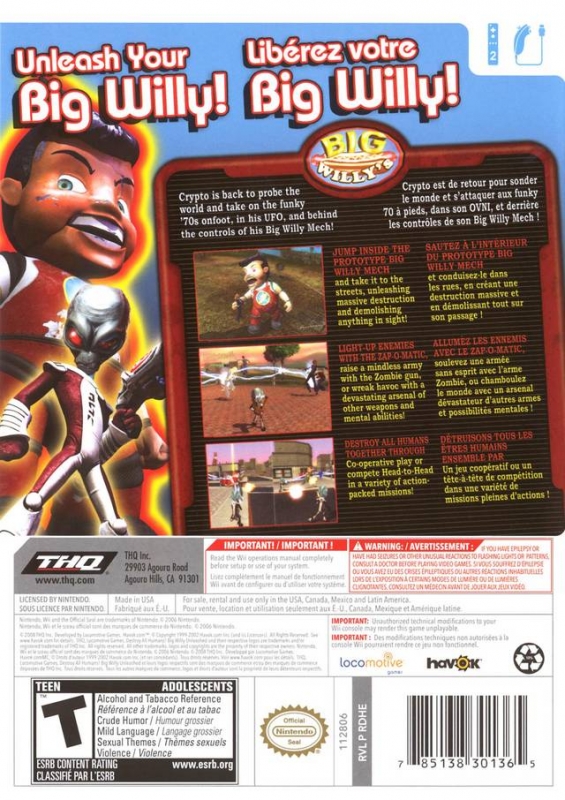 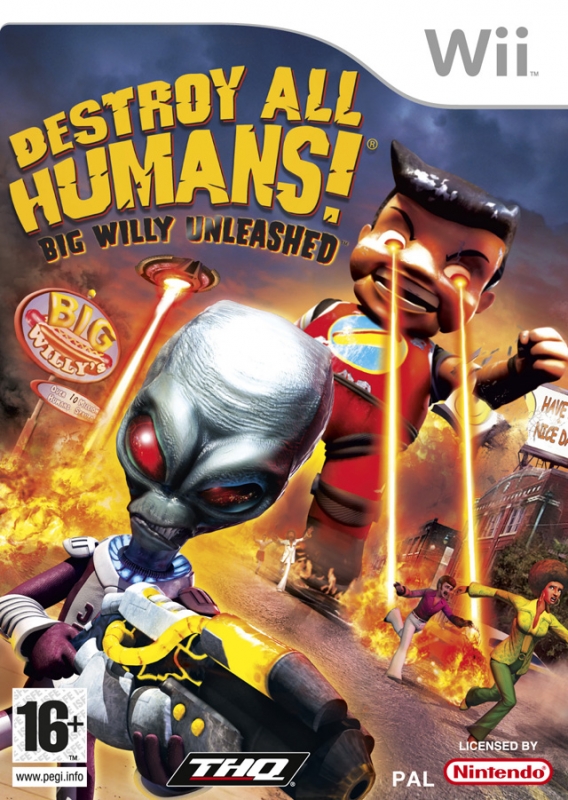 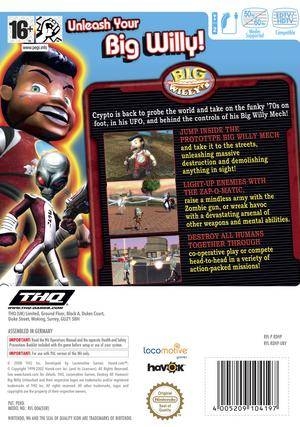 It's about as fun as a real alien invasion would be.

Someone who considers picking up a game with ‘Destroy All Humans’ in the title probably isn’t looking for a deep and engaging narrative complete with a bevy of compelling characters that drastically develop throughout. No, more than likely they want exactly what the title expresses – an excuse to unleash their inner maniac upon as many of the in-game denizens as physically possible. While that is indeed a major part of what Big Willy Unleashed entails, and can be quite as enjoyable as in previous entries, the alien doomsday premise fails to muster enough on the positive front to save what is ultimately a very bland and altogether disappointing sandbox experience.

Fans of previous Destroy All Humans titles will be right at home from the very first moment of mission one, with the series’ famed Furon warrior (and human killing machine) Crypto once again taking center stage. Acting as both a sequel to Destroy All Humans! 2 and a prequel to Destroy All Humans! Path of the Furon, Unleashed once again takes a bit of a morbid yet ultimately comedic approach to its story – another familiar and defining characteristic for fans of the franchise. And as the first game was set in the 1950s, and the second in the 1960s, it’s only fitting that the next would cover the 1970s, which means that you can expect to see and hear a variety of pop culture references from the disco decade.

Between game two and Unleashed, players learn that Crypto’s alien-hologram mentor Orthopox 13 (or “Pox” as he’s mostly referred to in the game) has decided to create and operate Big Willy, a fast food restaurant chain. But what’s the catch? As Pox reveals early on in the game, while Big Willy is hugely successful and very much a lucrative business, all meat served is actually made of human flesh, thereby allowing Big Willy to serve as an ingenious way of disposing of all the humans that Crypto kills. It is then up to the alien duo to protect the Big Willy franchise from rival fast food corporation Colonel Kluckin, who attempt to expose Big Willy’s secret and take out the chain. There’s nothing particularly defining about it all, but that could be more easily forgiven if the rest of the game was above par.

One of the most glaring and disruptive issues players will have with the game right out of the gate are the low-end PS2 visuals. Just about wherever you look, textures come off as splotchy, character movements are nothing short of robotic, and the frame-rate will slow down to an almost complete halt anytime an assortment of objects are moving across the screen. When you quit looking and actually start guiding Crypto, you’ll then notice the horrid collision detection. It’s never surprising to completely walk through objects as they’re lying about or bump into invisible walls when they aren’t. And before anyone makes the claim that poor graphics can be forgiven en lieu of a winning gameplay formula, let it be known that while that can be true to an extent, I find it very frustrating to have to put up with a technical mess that’s straight out of a last generation budget title, and you should too. Unfortunately it’s just too offsetting and, well, “bad” to just simply toss aside. “Winning” likely isn’t the best way to coin Unleashed’s gameplay either.

The mission-based layout of the previous entries remains largely unchanged, giving players ample time to shoot up one of the game’s four towns in between to their liking. However, with the added implementation of the Wiimote, the way in which Crypto and his many war devices are utilized has obviously been altered, for better or for worse, given the situation. One of the most intuitive ways the added controls have improved gameplay can be attributed to the Wiimote’s IR pointer. Pointing and shooting down enemies, whether you’re using one of the many guns at Crypto’s disposal or gliding through the skies from up above in his saucer, has never felt as effortless and satisfying as it does now. In the same vein, Crypto’s “PK” system has also benefited from the added Wiimote support, as picking up and throwing enemies and items via Crypto’s mind (or whatever else it is that would give someone the ability to grab onto something without physically touching it) is definitely exhilarating. Weapon selection has also been expedited, and, very much as you would with the visor system in Metroid Prime 3, after a quick tap of the correct button all it takes is a simple point and click of Crypto’s impressive weapons’ arsenal to wield whatever gun your earthly invasion is calling for.

While many of the game's crucial gameplay elements are better than they ever were before jumping ship to Wii, the camera system didn’t quite manage as well. The developers over at Locomotive Games decided to take a page out of the Wii FPS control book and opted to incorporate the IR sensor for camera positioning. Pointing the Wiimote to the edges of the screen to move the camera has never felt as clumsy as it does here, with the speed at which the camera moves never exceeding a sluggish crawl. Saucer missions also suffer the same unfortunate fate, but this time instead of pointing to the edges of the screen, the camera is moved by twisting the Wiimote with your wrist. It simply never really works, and you’re more than likely going to suffer some damage because of it at one point or another.

The title’s missions are actually orchestrated pretty well, with an assortment of objectives and enemies keeping these feeling relatively fresh. Regrettably, there’s really not much that will keep you playing them. Although I mentioned previously that nobody should be expecting a Writer’s Guild-approved narrative, most of the humor in the game falls right on its face about 90% of the time. I’m not sure if they were exclusively catering to the pre-teen crowd here, but after the 25th time a Big Willy/penis joke is made all anybody else can do is sigh when the play on words is once again unapologetically used. Arguably, the only standout portions that Unleashed presents are the missions that allow you to helm a giant Big Willy statue that also conveniently acts as a giant mech. Grabbing humans from the streets below and popping out their brains to satiate Big Willy (and recover its health) is just as fun as it is smashing and destroying cars, trees, and buildings with your Heat Ray and deathly ways in which the mech passes gas. As with the saucer, Big Willy will be waiting ever so patiently for you to power him up and take him on rampages between all of your missions.

Music in the game never goes beyond the scope of “just being there”, as neither the 70s infused disco beats nor the orchestral tracks ever offer anything particularly catchy. But just as the previous titles would lead you to believe, the voiceovers are simply astounding with each and every character’s voice actor giving every dialogue sequence their all. The sheer amount of energy and the unique way both Pox and Crypto alone deliver their lines will no doubt bring you to a chuckle at least once.

Destroy All Humans! Big Willy Unleashed really is one of the most disappointing Wii efforts I’ve ever played. If you can manage to play your way past its many faults and stick with it, it’ll easily take you at least 10 hours to complete the main story, and that’s excluding the 15+ side missions strewn about the game. Gameplay and technical bugs are just too plentiful in Unleashed for that to be the likely scenario, even for series diehards. Also included are both a forgettable co-op and multiplayer mode, but they don’t offer enough content to be anything special. There’s so much potential in a title like this for the Wii, where not only is the competition nearly nonexistent, but I think the audience is craving for well-developed sandbox-style game. In any other situation I’d typically say that hopefully the developers can take what they’ve learned from this experience and turn the next game into something that is much more refined and enjoyable. But as it turns out, Locomotive Games, the developers of Unleashed, have apparently already gone down since the time of this game's release. Not only that, but it appears that the Destroy All Humans! franchise is on an indefinite break for the time being. It really goes to show what a couple of clunkers can do to an otherwise strong series of games.