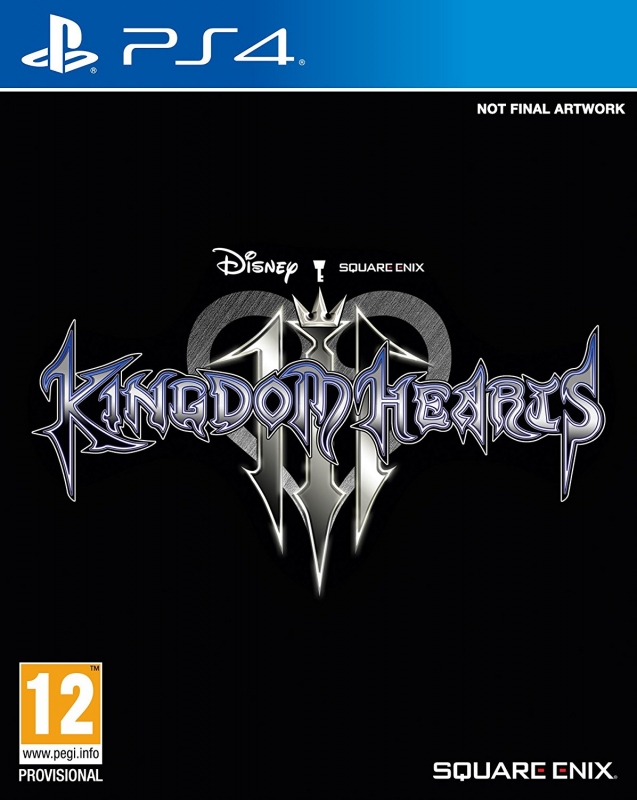 At long last, Kingdom Hearts III has arrived. It's surreal to actually play the game after so much time has elapsed since Kingdom Hearts II released in 2005. When I booted it up, I nearly pinched myself to confirm that I was playing the real deal rather than just another demo, remaster, or portable entry in the long-running franchise. However, Kingdom Hearts III quickly distinguishes itself in its stunning presentation, high-fidelity visuals, and grand scale. Yes, it's really here, and in a refined and spectacular-looking package too, albeit one that is at times weighted down by its befuddling narrative and aging framework. 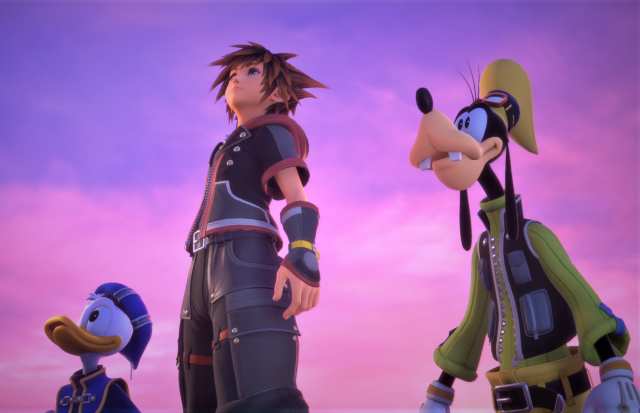 For the uninitiated, the Kingdom Hearts series launched on the PlayStation 2 to much fanfare. Although it is often billed as a crossover between Final Fantasy and Disney properties, players grew attached to the original cast of characters and intricate storyline. The primary protagonist is Sora, a plucky and adventurous boy who travels alongside Donald Duck and Goofy to visit several “worlds.”

These worlds encompass a range of levels, including both original creations and recreations of Disney settings (e.g. Arendelle from Frozen and San Fransokyo from Big Hero 6). Sora wields the series’ trademark keyblade, an oversized sword-like key, to fend off an assortment of foes. Enemy variety is excellent, and Kingdom Hearts III includes many past enemies together along with bold new designs. Through his battles, Sora develops new skills with experience points in what is otherwise an unconventional action RPG series. 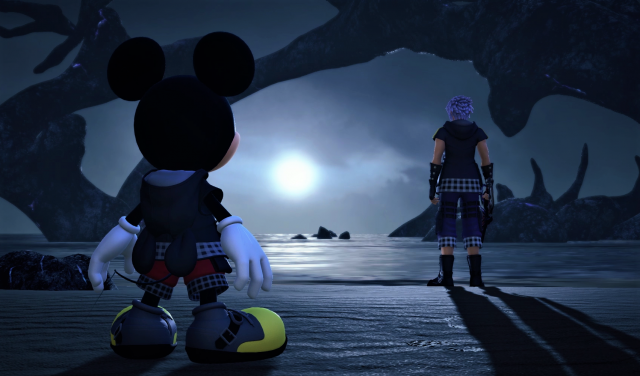 Several articles can be dedicated to the publication history or narrative alone, but in short the storyline is a mess, and the game developers know it; dialogue is written in such a way that characters summarize past events for no reason other than to help the viewer figure out what’s going on. There are refresher videos included in the game that can help first-time players or anyone who missed an entry. Prospective players should note that the plot heavily features characters and events from the non-numbered entries too, so don’t expect to understand what’s going on if you skipped all but the original Kingdom Hearts and Kingdom Hearts II. Patient fans will still enjoy the narrative's satisfying twists and turns, as well as the return of fan-favorite characters, even if the intricacy doesn’t always play to the story's advantage. 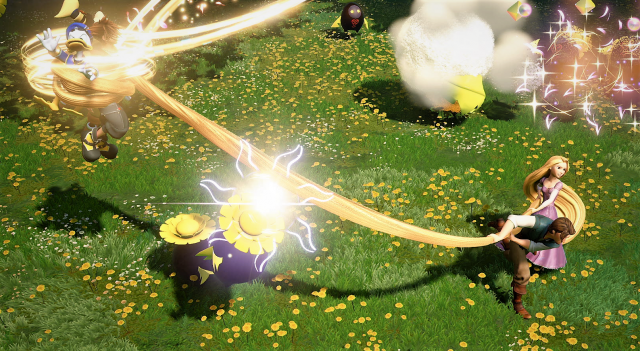 From the attractions feature, a gameplay mechanic that incorporates Disney World rides like the spinning teacups into battle, to the worlds themselves, the game is among the absolute best-looking titles on the market today. Switching to Unreal Engine 4 was a wise decision, and the series makes the jump intact. The graphics shine, and cutscenes successfully capture the spirit of the original films and their inhabitants, which is a monumental achievement. The voice acting is consistent with past entries. Whether that is a pro or con depends on your subjective taste. Personally, I wish Square Enix would secure the original voice actors before choosing the worlds, but it’s hard to complain when so many Disney stars returned to their roles, breathing life into the game.

The presentation is especially striking with the increase in scale compared to past Kingdom Hearts games. Combat is flashy, and the worlds have a sense of verticality that have successfully evolved from the quick traversal mechanics in Kingdom Hearts: Dream Drop Distance on the 3DS. The enhanced sense of verticality adds refreshing variety to the worlds and boss battles, as players are encouraged to scale the world to vanquish foes. I often explored high-and-low for secrets, such as the Mickey Mouse emblems that are hidden in each world. Snap enough pictures of the emblems and you unlock the secret ending – a series tradition that teases what’s to come in the franchise. This kind of level design is a standout feature and differentiates Kingdom Hearts III from other genre favorites. 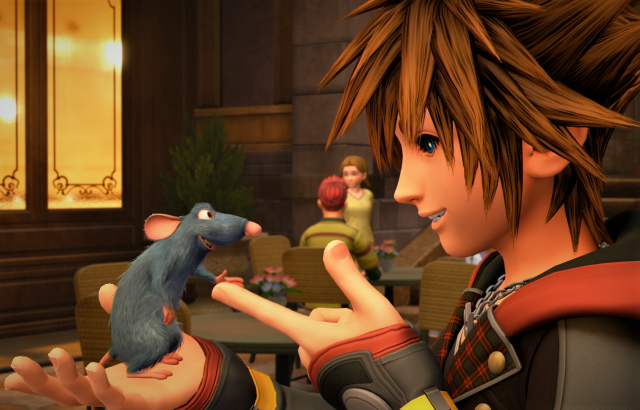 Not everything is equally polished. For example, Rapunzel’s hair often switches from appearing dynamic and somewhat realistic in appearance – just like in the movie – to looking as if it's been superglued to her head. Special moves trigger much too frequently, which diminishes their novelty early in the game, and I was baffled to be allowed to trigger special attacks in cramped spaces when the maneuver was so obviously designed for an open arena. The result is a jarring mess where you run into obstacles and have a limited view of the action.

I was also disappointed to see the Gummi Ship’s return (spaceship segments you play between worlds). There’s nothing terrible about it, and the developers decreased the levels’ linearity, but Square Enix has yet to justify the Gummi Ship’s continued series inclusion. Ultimately, however, these oversights are forgivable when the presentation is often so stunning. 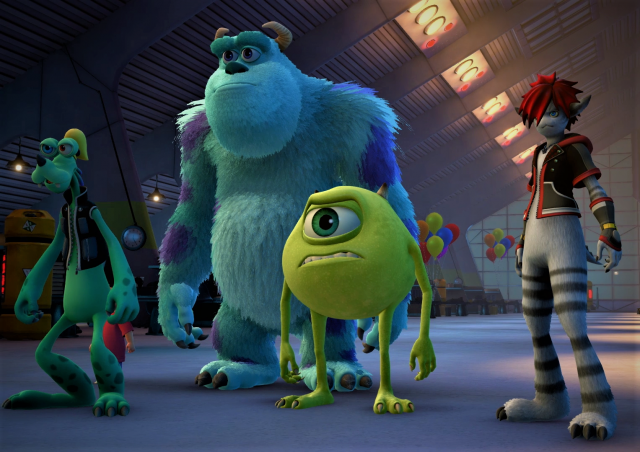 Gamers will find that the weaknesses of Kingdom Hearts III are largely the same weaknesses from Kingdom Hearts in 2002. The narrative is a jumbled mess, the cutscenes are excessively long, the gameplay is linear (although somewhat less so in this entry), and obvious filler content is obvious. These issues are just more apparent and painful in 2019 when other long-running franchises have reinvented themselves with the changing times, including Square Enix’s very own Final Fantasy XV.

Kingdom Hearts III is still the series at its best though. Its presentation and action RPG gameplay are nearly unparalleled and certainly unique among genre competitors. Although the barriers to entry are steep, particularly if you aren’t accustomed to the quirks of Kingdom Hearts, it is a testament to the game’s high-quality production that first timers could begin with this entry and still enjoy their playthrough. 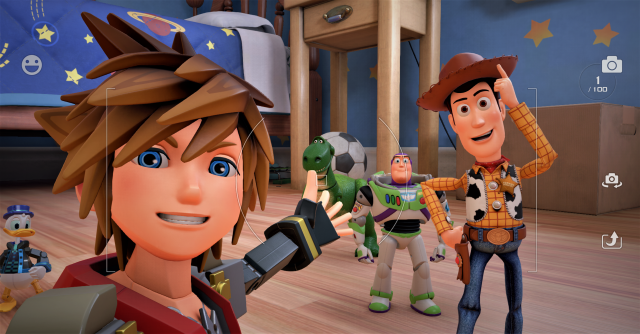 For fans, the quirks are a part of the charm, and as a longtime fan I’m beyond pleased that it skipped the last console generation. This game would not have been possible on older hardware. Even still, the series is showing its age and Square Enix has its work cut out for it in modernizing the series for future entries, or else the company may find that fans are less patient and that the charm has worn off. But for all its flaws, Kingdom Hearts is still peerless; there’s really nothing else like it.