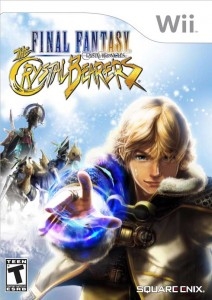 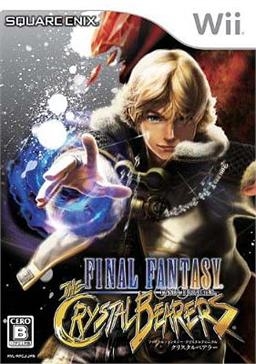 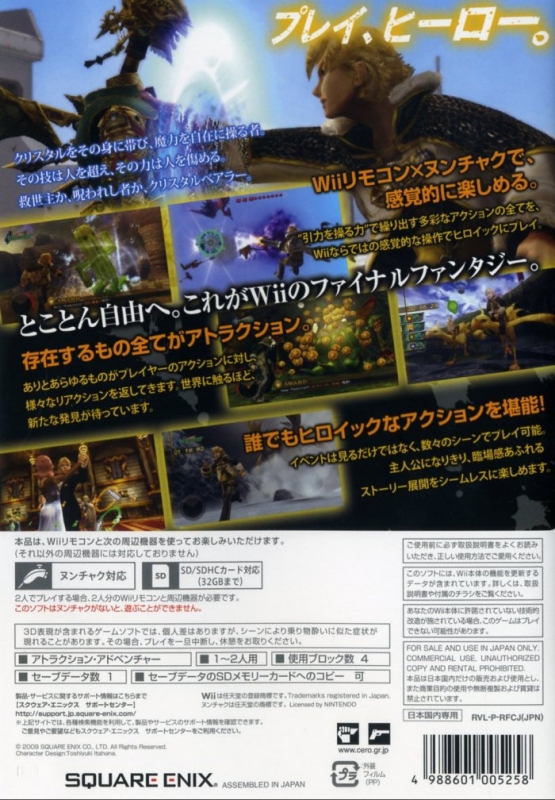 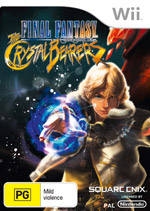 Crystal Bearers focuses on the story of Layle, who has the ability of telekinesis because he is a Crystal Bearer. You can think of Crystal Bearers as the Square Enix version of mutants, the fact that someone is a crystal bearer means they have some kind of power, but those powers can vary greatly. Layle is working a job for the government of the region when he comes upon a Yuke, a race of people thought to be completely extinct. The story then shifts from the more mundane narrative of Layle just trying to get by while being a wanted man, to a story of the four races that inhabit the world and their conflicts.

The problem I have with the story is it seems like it is paced for an RPG. You spend the first couple of hours doing pointless stuff until you get to the real meat of the story, which works great for an RPG where you’ll have another 25-55 hours of gaming left over after those first couple of hours, but this story set up doesn't work for an action/adventure game unless you're going to have a length akin to something like Zelda, which Crystal Bearers does not. This means you spend about half the story bored because you’re just walking from place to place taking care of minor tasks - Crystal Bearers' story only finally picks up in the second half of the game. Short action/adventure games have to start up quickly and get you into the action, but Crystal Bearers fails to do that.

Gameplay in Crystal Bearers is largely based on Layle’s ability to pick up and throw things with his crystal powers. When you walk into a field of enemies you will have a certain amount of time to clear the field. If you can’t clear the field in time the enemies will disappear and then respawn after a couple of minutes. The only way you can attack is by picking up random objects or enemies and throwing them, which is done using the IR pointer on the Wiimote. Just point at the thing you want to pick up, hold the B button a while and you will be able to pull the object in one of four directions based on how you swing the Wiimote. Usually it doesn’t matter what direction you swing in once you have gotten to this point, but you do have this option just in case you are in a situation where it does matter.

This gameplay mechanic could get stale pretty quickly, but Crystal Bearers does a lot to keep it varied. While you can just toss random objects at your enemies, there is a bit of strategy in how different things interact. Let’s say you are facing a bomb grouped up with two goblins. Now you could just pick up random objects and throw them at the three until they perish, but that will end up taking a lot of time and you might not clear the area in time to avoid a respawn. I found the best way to take out a group like this is to find a barrel of gunpowder and throw it at the bomb, this will make the bomb explode but before it explodes it will shine and attract the goblins into the blast zone. Now you have killed all three in one fell swoop. It is also possible to enhance your abilities by buying or creating equipment and this is particularly helpful in increasing the range of your telekinetic abilities.

Variety in gameplay is also added by putting in a whole ton of mini-games. Some of these are nice ways to add gameplay to what would otherwise just be a cutscene, but sadly most of these are ill explained. Crystal Bearers will just toss you into a situation, such as watching two bikini clad girls playing a round of king of the hill on a floating platform, and ask you to cheat and help your friend win without getting caught. So you are sitting there without any idea on how to do this, and on the bottom of the screen the game quickly offers up some hints. You cannot pause and look at these hints, so you are forced to try and play the mini game without having a clue, while simultaneously trying to catch the hints scrolling past you on the bottom of the screen. This set up led me to love some mini-games and to completely hate others. There are a couple mini-games that I never figured out how to play and luckily Crystal Bearers lets you skip the mini-game after a few tries, but those few tries of having no clue of how to succeed are quite annoying.

The single biggest problem with Crystal Bearers' gameplay is that you spend a whole lot of time just trying to get from one place to another without a whole lot to do in between. As I mentioned before, you will come across areas with enemies in them, but there really is no incentive to defeat them. Most of the money I used was found from random treasure chests, as well as items that are used to synthesize new equipment. There is no experience system so that is out of the question and you can pass right through those areas without killing a thing if you want to. Your usual action/adventure game will force you to take out the enemies before you can move on, while an RPG will give you incentives for killing the enemies such as experience and more money than you could find lying around randomly, but Crystal Bearers accomplishes neither of these.

The only incentive offered is that if you can clear an entire area you will get a myrrh heart which will increase your total life. This is unnecessary though, as I completed the entire game while only completely clearing three areas, so a lot of the time you can just walk right through these areas and move on to the next. This is especially likely when you are going through the same area for the third or fourth time, as people send you back and forth across the world. You will probably play around with enemies the first time you see them, but there is very little incentive to clear an area so this will only last through the initial contact. Couple that with a poorly implemented map system that had me confused about where I was going a number of times and you have a recipe for a game filled with walking.

Graphically, Crystal Bearers is nothing to write home about, as they say. There are some cool-looking moments coupled with mini-games during boss fights, but overall the game is average in both artistic and technical qualities. I wish I could say that the voice acting was average as well, and for the most part it is, but there are some horrendously poorly delivered lines and annoyingly bad characters. Thankfully these are the exception and not the rule, but they still hurt the overall presentation. The music is better than the voice acting and fits the mood and atmosphere of the game well, even if it isn’t particularly great.

I played through Crystal Bearers in 9 hours and this included wasting some time on side quests and getting lost every now and then. There is a new game plus option, as well as lots of side quests and little activities you can do, but it is still quite disappointingly short. Either this is a short action game from the God of War stable, in which case it spends far too much time with boring gameplay, or it is an RPG/Zelda type game which involves a lot of walking and talking to people but is expected to be far longer. I prefer to think of Crystal Bearers as being on the Zelda side of the action/adventure spectrum, based on its gameplay, which means that a length of 9 hours is below the norm.

Some have been talking about how Crystal Bearers is being reviewed as an RPG instead of an action/adventure game, and that this is the reason for its lackluster review scores, but no matter how you look at it Crystal Bearers is simply a below average game. The gameplay is interesting at first, but there's no proper incentive for defeating enemies, some of the mini-games are complete crap, the story is good for the second half but boring for the first, and the voice acting has some major issues at times. If you want a short - and lower quality - shot of Zelda-type gameplay then go for it, just don’t come in expecting a great game.