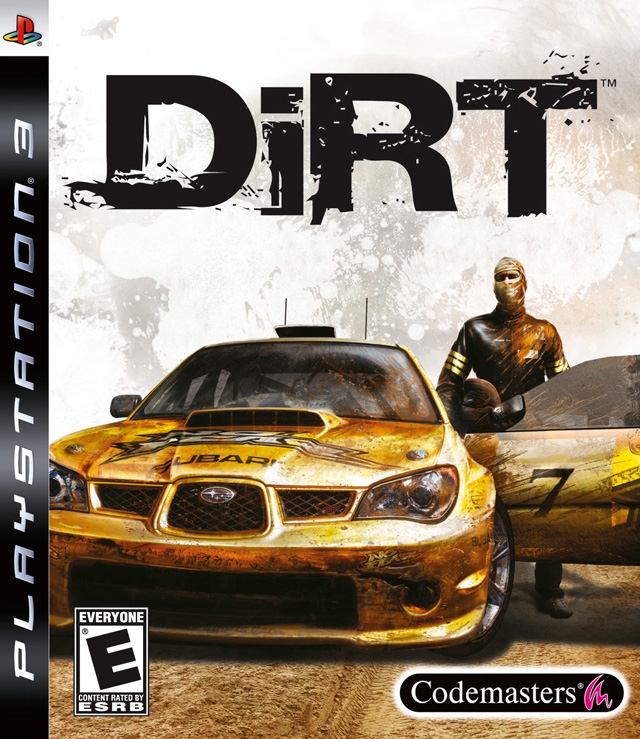 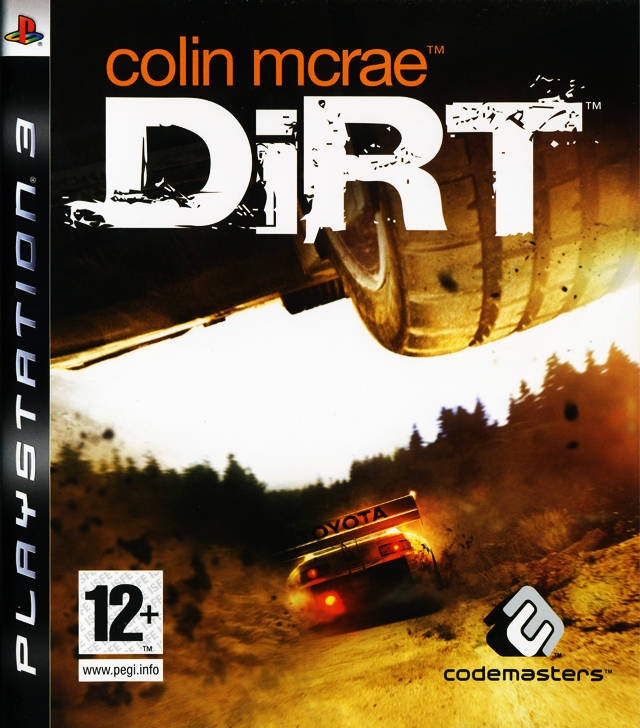 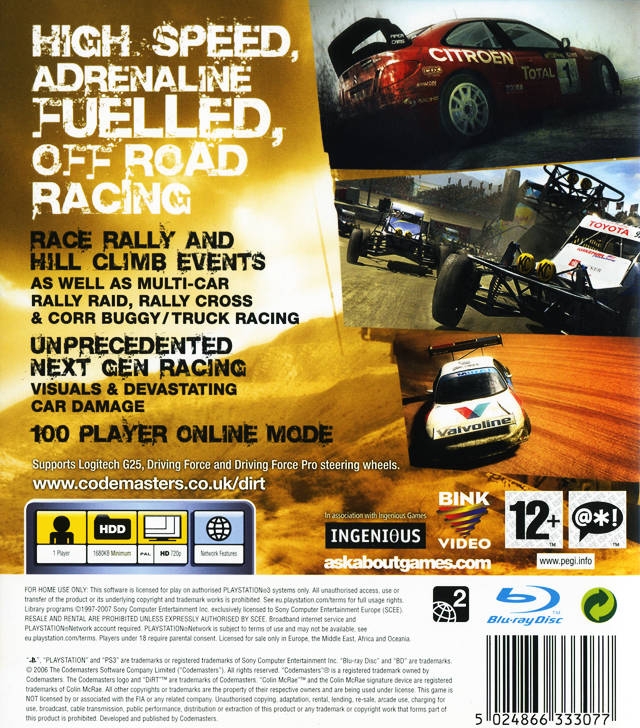 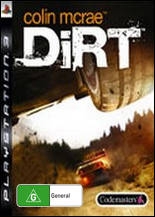 Dirt, dirt, all around, and not a drop to spare.

DiRT is a continuation of the Colin McRae racing series which was based on the World Rally Championship, a rally sport that is perhaps best known in Europe. Whilst those roots are very much on show in DiRT, the developers have decided to diversify the amount of racing types available in order to broaden the game’s appeal (in particular, to appeal to an American audience that previous games in the series had failed to capture) and as well as a change of name the series has also shifted slightly to the arcade side of the simulation-arcade racing spectrum.

The main focus of the game is on the career mode. Here you’re presented with a huge pyramid-shaped structure consisting of rectangular blocks. Each block represents one race. In order to progress up the tiers of the pyramid you must gain points by competing in these races. Collect the required amount of points and new race blocks will be unlocked and you’ll be able to compete in more races. This continues until you get to the top of the pyramid and complete all of the race blocks.

Each race you complete awards you not only with points that unlock new blocks, but also with money. Money plays an important part in your progress because almost all of the races you enter allow only a handful of different vehicles to compete, so in order to compete in those races you’ll need to buy more vehicles. Fortunately knowing which vehicles you need to get and then purchasing them is extremely easy, and is all dealt with in the menu screen for each race, so there’s no need to back out of menus and flick back and forth in search of vehicles that meet the requirements. Money rarely becomes too scarce either, although your winnings depend on the difficulty you set for each race. If you’re playing on the easiest of the five different settings you’ll probably have to repeat a few races every now and then in order to gain enough funds to realistically advance, but most people will play on one of the average settings where money is never really a restriction on your progress through the career.

One area in which DiRT departs from its predecessors is that there are now several different types of races you can enter. Rather than just competing in your standard rally events where you drive through a course on your own and only compete against the clock, there is now a much greater level of variety when it comes to races. There are of course standard rally races and similar variants, such as hill climb races (which are similar to rally events, but you’re always going up-hill) and crossover races (where you race against another car on the same looped circuit, but you start from different points on the track). But there are also genuine races against other vehicles, including rally cross (where you race on a standard track for several laps, as you do in most racing games), CORR racing (similar to rally cross, but usually on a dirt or mud track with buggies) and rally raids (where you race against other vehicles on a standard rally track from point-to-point).

Some of these different race types probably won’t appeal to you after a while. At first the level of variety makes for a nice change from standard rally events and means you keep coming back to try out something new. But when the novelty wears off some of the events will really become a drag and you’ll want them to be over as soon as possible so that you can get on with the events that you do enjoy.

I found the rally raids in particular became a grind for me, but all of the different race types have their individual strengths and weaknesses. On the one hand your more standard rally events offer the pure rally experience that fans of previous games in the series will love, but the new audience the game is attempting to appeal to is unlikely to take to racing against the clock. Rally raids and hill climbs have the appeal of usually involving big, bulky racing trucks and lorries - which makes for a unique experience - but after the first few races the slow pace can begin to grate. CORR and rally cross events allow you to face off against other vehicles, which will probably appeal to those players used to more standard racing games; but at the same time these people may find the computer AI lacking in comparison to the games they’re used to. So you’ll probably discover which race types suit your style of play the most and you’ll focus on them, but on the flip side you’ll probably encounter events you don’t enjoy anywhere near as much and they can really drag the game down.

The career mode has you racing on plenty of tracks from all over the world including Germany, Italy, Japan and the UK. The details, such as track design, background environment, buildings and the weather (yes, it always rains in the UK) all vary from map-to-map and region-to-region. One thing you may notice is that the handling remains remarkably similar across all of the different track types and surfaces - be it tarmac or dirt track. The car’s handling, responsiveness and breaking all remain fairly constant, which means a lot of the vehicles feel lacking in weight and interaction with the track.

The gameplay is a mix of simulation and arcade racer, although it primarily falls into the arcade category. Vehicles rotate from a central point, which may feel a little unusual at first, but as soon as you get the hang of it you’ll be winding down tight roads at exhilarating speeds, sliding around the corners smashing into the barriers and kicking up mud and dirt everywhere. The lack of grip really lends itself to the idea of only ever feeling like you're half in control of the vehicle, perilously hurtling across the mountain tops.

Some of the car models can be a little underwhelming, but the damage modelling is notable, from light dents and scratches where you’ve made limited contact with a barrier or a wall, to smashed windscreens and parts that fall off when you make significant contact. As in previous Colin McRae games though, whilst temporary barriers can be obliterated, other objects like a humble fence, tree or even a bush can prove to be an obstacle too far and won’t take any damage from your vehicle but will instead just stop you dead in your tracks. It’s a minor annoyance that doesn’t generally affect the gameplay, but it does limit your immersion in the game.

The damage modelling isn’t just there to look pretty; it also affects your car’s performance. All of your car’s systems are monitored, from the wheels and bodywork to the cooling system and the engine. Those loud crunches and smashes soon turn into engine whines and metallic scrapes, because if you smash certain areas of the car up too much you’ll start to notice it impact on your vehicle’s performance.

The levels are often full of detail and have some great draw distances, particularly when it comes to the hill climb events, as you’ll be able to see areas of the track you drove along at the bottom of the hill right from the top. As I mentioned earlier there are tracks from all over the world, and the graphical details in each level really demonstrate this – from the dark and overcast UK countryside, to the blistering heat and light of the Australian desert tracks. The lighting in particular is used to great effect but it’s also a bit over the top at times, with some levels (particularly in Australia) coming off too bright, to the extent that some parts of the track can actually be hard to see on the default settings. Finally, there are occasional framerate and pop-in problems, but nothing that should really affect your enjoyment of the game.

Mention must also be made of the menus and loading screens, which are some of the best I’ve come across this generation. The menus are all fully 3D and can be moved round with the analog stick. The movement from menu to menu is brilliantly fluid as well. The loading screens are similarly slick, but they also display your racing stats, such as total time driven, lifetime average speed, longest jump, longest winning streak, etc. It’s a truly brilliant idea. The loading screens can sometimes be quite lengthy, but with your racing stats flying out of the screen you actually want them to be even longer.

The career mode is a solid length for an arcade racer and it will take many hours to unlock all of the races and vehicles. Once unlocked you can go back and replay a race whenever you want. There are a few other single player modes beyond the career, including a time attack mode which allows you to attempt to beat previous high scores, but it won’t be of much concern to most people, and a championship mode which allows you to race through all of the different rallies around the world. It is similar to the core game found in previous Colin McRae games and should therefore appeal to fans of the franchise. The game also stores all of your stats which you can view from the main menu (as well as the loading screens). However, I had grown bored of the game by the time I had finished the career mode and felt little inclination to explore these bonus modes. That’s the main problem with the game for me - it lacks longevity, in part because of the shallow gameplay that has no hidden depth or challenge and also because the appeal to diversity has left each of the race types lacking in some form or another.

There’s also a multiplayer mode, although it’s severely lacking because it’s basically an online time trial mode. The game boasts 100 player races, which is somewhat misleading because what it basically amounts to is 100 players (if you can find them) racing on their own around a track and then being ranked based on their times. Whilst I experienced no lag (for obvious reasons), and the online interface worked perfectly well, the whole thing felt rather pointless really and I can’t imagine many people finding this to be a significant diversion from the main game.

DiRT is a very enjoyable game, for a brief period of time at least. With accessible gameplay, plenty of tracks from all over the world and a concerted effort to introduce more variety to the series, DiRT is a solid racer. The graphics are impressive for their time, with damage modelling that expands upon that which made the series popular, and the track environments and backgrounds are superb. But attempts to mix up the racing types have come off with mixed results and this is a game that, for me at least, lacks replayability due to gameplay and racing types that lack depth.