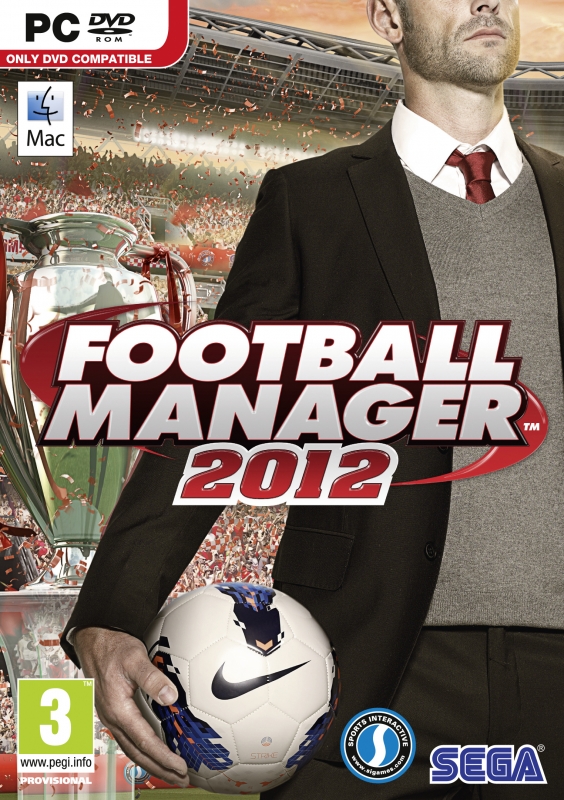 Move aside, Sir Alex, there’s a new coach in town.

I can’t resist drawing parallels between Football Manager 2012 and the recently released Red Orchestra 2: Heroes of Stalingrad. Odd choice of comparison, right? One’s a football (that’s soccer, for our American readers) management simulator, the other about as hardcore a shooter as they come. But they both share in common their utterly uncompromising approach to their respective genres; “profoundly hostile, unnecessarily lifelike, and potentially… really quite satisfying”.

Extremely popular on this side of the pond, with a devoted fan base, it’s perhaps only a slight exaggeration to say that the Football Manager series only entered the collective online consciousness of American gamers when IGN sparked controversy with their (initial) review of the 2009 iteration. That’s because, much like Red Orchestra 2, Football Manager 2012 appeals a very specific demographic –  this is no FIFA or PES, so don’t come in expecting pretty graphics and on-pitch gameplay, this is a pure management sim. 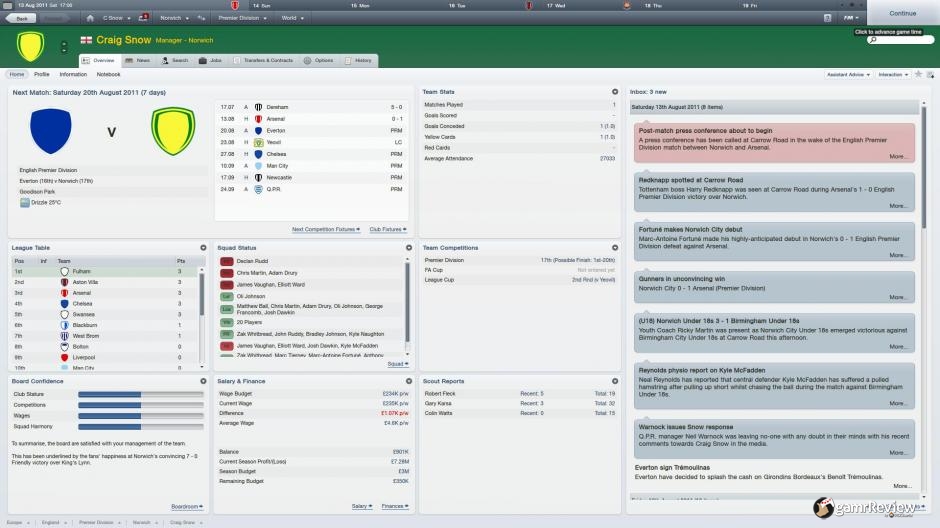 I want to preface the core of this review by saying that it’s been a fair few years since I last bought a Football Manager game, over the course of which the series has been crammed full of extra data, menus (lots of extra menus), features… you name it, the developers have added more of it, and a lot of it is brand new to me. It’s pretty overwhelming, even with my past experience, so my heart certainly goes out to newcomers. This is one inhospitable game. To help mitigate this a series of tutorials are available to play through, but these, by their very nature, only give you a fleeting glimpse of the game’s overall content, and though they teach you how to navigate menus and complete certain tasks, they don’t really tell you how to play the game properly. A lot of that knowledge comes with experience, and you could certainly be forgiven for giving up well before you’ve acquired the man hours necessary to excel at (and enjoy) this game.

Break through that barrier to entry, however, and you can quickly become addicted to running your very own football team. Working up from one of the lower spots in your league (or indeed from a lower leagues to the premier league) is extremely gratifying, and you’ll be watching the scoreboard and match progress with nail biting tension in the early stages of your career, when the money’s tight and success or failure hangs on a knife edge. Day to day management consists of all sorts of tasks, from negotiating transfers and loans, to keeping the board and management on side, scouting for new talent, attending to your e-mails, maintaining the morale of your footballers, and, ultimately, seeing through a complete match day, where you’ll determine the team’s line up, tactics, substitutions, and so on. There’s so much depth that a complete list of activities would probably be longer than the entire body of this review.  A lot of it can be ‘automated’ in a manner of speaking. For example, you can rely on your management staff to guide you on who to recruit and who to let drift away from the club. In fact, you can theoretically let the game play itself for the most part, only attending to essential tasks and watching over matches - just don’t expect  things to end all that well if you do. 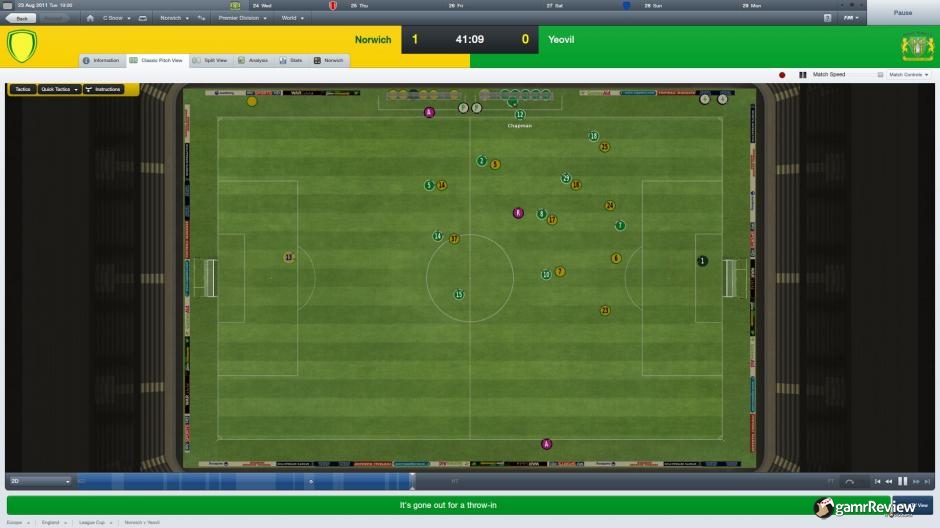 You’re frequently challenged with new problems (a common theme for my club early on was the assistance advising me that certain players were having trouble integrating into the squad). However, I often found it hard to grasp exactly what was required of me to remedy the situation. The game could certainly do a better job of indicating how to go about fixing problems (a simple tooltip would be a godsend); there’s a disconnect between the untold amount of jobs that you’re tasked with overseeing and the ability to actually get to grips with them, and then, beyond that, whether to actions you’ve taken are having a positive effect on the pitch. You can, for example, tweak your tactics mid-game, but you’ll never be entirely sure of whether what you did had the desired effect - of whether it was sheer blind luck that your team managed to score a last minute equaliser, or your managerial prowess at work.

This is not always the case. Sometimes the effects of your actions are immediately felt. Take, for example, team talks and player interactions, where you choose a ‘tone’ of address (passionate, aggressive, calm, assertive, etc.) to try and spur your team on to victory and boost their morale. The effects of your pep talks are shown instantly, and player morale is omnipresent. If you mess up you’ll know it.

The fine line between information overload and over-simplification is shattered in favour of the former, then, giving the game a steep learning curve. The upshot of this is that it gives Football Manager 2012 a superb degree of longevity. It’ll take a massive investment of hours to see your club through to the end of a season, even if you’re palming off a lot of your responsibilities. If you decide things aren’t working out all that well, or want to freshen things up, then you have the ability to turn leagues off and on mid-game. Say you want to try your hand abroad for a change, well then you can. And with over 50 countries’ leagues represented there’s no shortage of alternative clubs to take over. 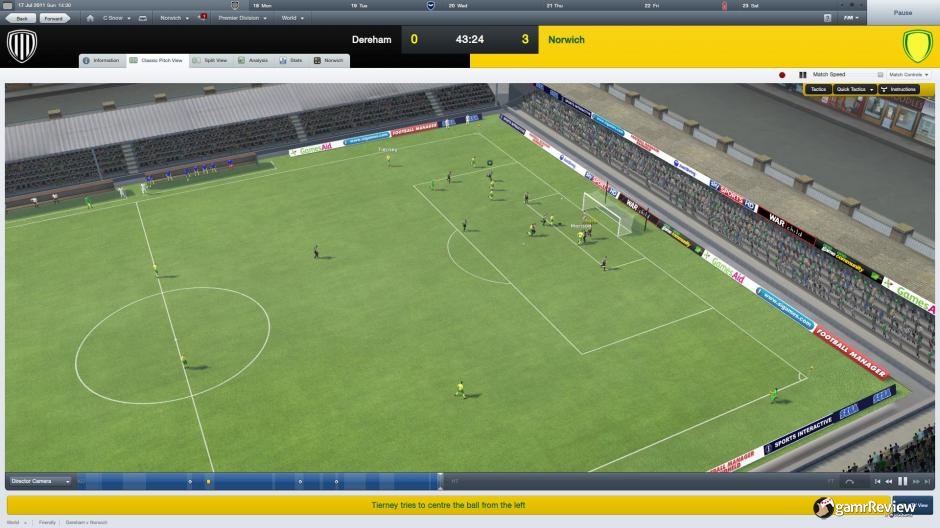 As I alluded to earlier, Football Manager 2012 isn’t a graphically attractive game, nor is it meant to be. For the most part it boils down to a series of pages full of tables, numbers, stats, charts, graphs and text. There is a 3D engine which allows you to watch each of your matches in real time, but it’s basic and not particularly satisfying – I soon reverted to the traditional 2D match display, which has a certain nostalgic appeal. There are only very limited sound effects (a whistle blowing, the ‘thunk’ of a football being kicked, etc.), and no music whatsoever (a long-standing missed opportunity – a pleasant soundtrack would do wonders to make the game feel more atmospheric and engrossing).

Overwhelming, hostile, and boring to some – more the invention of a masochistic accountant looking for ‘fun’ in his spare time than an actual game. Utterly addictive,  deep, and staggeringly comprehensive – the authoritative management simulator to others. Football Manager 2012 is a tough sell for newbies, but fans will surely love every tortured minute of it.