Nothing in life is free.

Dota 2 has just officially released. It’s been in Beta for over two years now, and I’ve been on board right from the start. Over the past couple of years Dota 2 has evolved quite substantially: new heroes are regularly added, new features and modes get introduced, and the menus and hero models get revamped. This has been, for all intents and purposes, a complete game for some time now, but one that has been (and continues to be) constantly updated and improved. After almost 1,400 hours of game time (yes, really) I still don’t feel entirely capable of giving it a thorough review, which speaks to the wealth and depth of content to be found within Dota 2, but I'll give it my best shot... 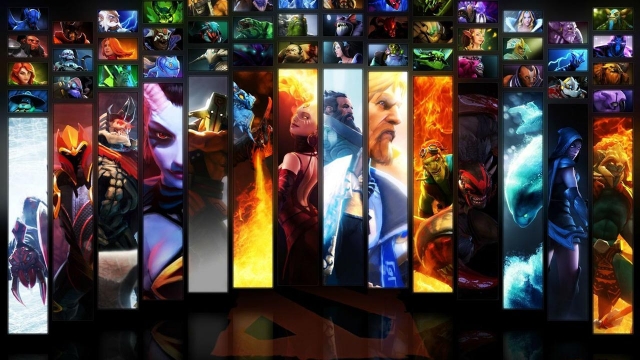 So Dota 2 won’t cost you a penny if you don’t want it to, but it’s not free, far from it. Dota 2 will cost you dearly in other ways; it’ll grab a hold of you, batter you into submission – more often than not making you feel utterly useless and incompetent in the process – and mould you into a hardened battler. And after every abusive encounter with one of the most combative communities you've ever come across (which is saying something, given this is the internet we're talking about), you’ll come back begging for more; craving that elusive, ungodly feeling of power and control that being the most valuable player on a team in a Dota match provides. Before long it’ll rapidly be creeping up your list of most played games of all-time, and every step of the way Steam will be there to log your hours, days… weeks, even.

What am I trying to say? That DotA 2 is highly addictive, naturally, like all good Dota-esque games. But not just that – this is, without a shadow of a doubt in my mind, the premiere Dota variant on the market. If you’re new to the genre then you may as well start here. Don’t, for even one second, think that it won’t be a rough ride; that you’ll be able to bluff your way through and hide your newbie nature. This genre makes for one of the most inhospitable environments for newcomers in all of gaming, but Dota 2 at least gives you the opportunity to learn the ropes against AI opponents and through tutorials before it throws you to the wolves.

For the LoL, HoN, or original Dota players amongst you, the transition to Dota 2 makes for a much smoother ride. I had been playing HoN fairly regularly since launch and it only took about five or six matches in Dota 2 before I’d found my feet and began to adjust to the various quirks and nuances of this particular game, and I’m sure most Dota and MOBA fans will experience a similarly smooth transition. It’s a testament to the quality of the experience on offer in Dota 2 that I only once went back to HoN (a game I have fond memories of playing) throughout Dota 2’s Beta, and that was only because I couldn’t access Steam on the day in question. 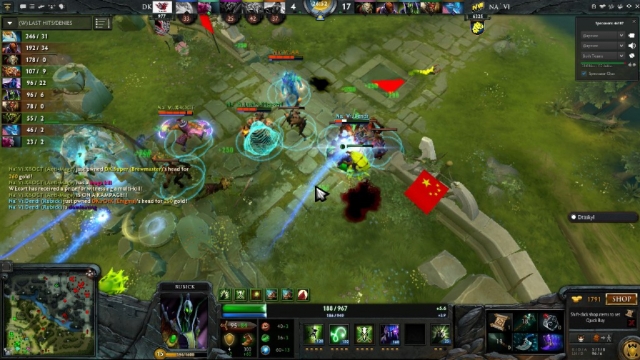 The first thing that will probably strike you, coming from one of those other games, is that Dota 2 is the prettiest of the bunch. It’s a clear generational leap ahead of most of its competitors. When I briefly went back to HoN I was struck by how basic and almost ugly it is in comparison. In Dota 2 the character models are supremely detailed, the map - which is virtually identical in all DotA clones - is full of beautiful little touches, from the stunning water in the stream that splits the map in two, to the wildlife you spot in the woods.

One of the most under-appreciated aspects of Dota games is the characterisation of the heroes. Dota 2 doesn’t disappoint in this respect. All of the heroes are brimming with personality, from the sultry seductiveness of the Queen of Pain (‘I love it when you resist’), to the immortal arrogance of Zeus (‘That’s all it takes to kill you?!”), to the adorable and hilarious banter of the Siamese twins, the Ogre Magi. The sound design is top notch as well. All of the heroes have hundreds of lines of dialogue that they voice over the course of a match, which is of course superbly voiced, and the sound effects and music help to round off an excellent presentational package. Interactions between the various heroes are also brilliant touches. Take, for example, the way the sea creature Tidehunter likes to taunt and belittle the Admiral Kunkka.

Gameplay in Dota games is always going to be an acquired taste. It’s both hard to learn when you start out, and nigh-on impossible to master - even professional players will make several mistakes each match. The aim of each standard game is to destroy the other team’s base. It’s a 5v5 set-up, with each player picking a unique hero from a line-up of roughly 100 heroes, which ensures that you’ll rarely see the exact same line-up twice and that each game is truly unique in its own way. The bases are connected by three main ‘lanes’, which are guarded by towers and weak AI-controlled units called creeps. In the early stages of the game the main aim is to acquire more experience (which levels up your unique character, allowing you to access their individual skills as well as increasing your base stats) and more gold than your opponents (with which you buy items), which you achieve primarily by killing creeps, towers, or opposing heroes. 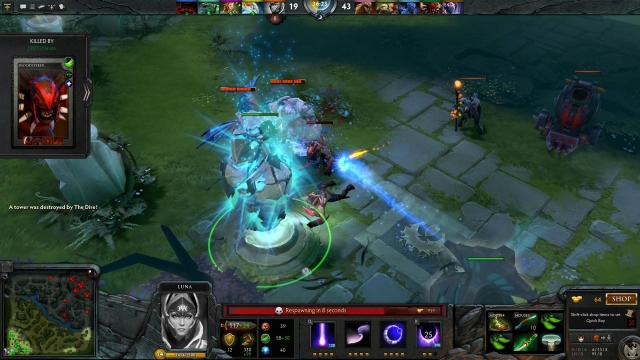 What makes the game so engrossing isn’t just that each match is unique because of the huge hero pool you have to select from, but also because each hero can also serve in several different roles, from support (i.e. you help the team at your own expense), to ganker (a hero that excels in picking off enemy heroes in the earlier phases of the game), to carry (the key late-game hero), to pusher (a hero which excels at destroying towers and bases early on), and so on. All added together it makes for one of the most intricate multiplayer experiences in gaming, and hence the reason for its immense popularity.

There are a few noticeable differences between Dota 2 and its competitors, besides just art style and technical proficiency. Perhaps the most glaring difference is the speed of the game. Dota 2 is much slower than HoN, for example. Not just in the sense that games often last a lot longer (I would say the average for me is around 40 minutes), but also that hero movement feels much more sedate. This is neither a good nor a bad thing, just something that is noticeable upon migrating from one to the other.

Another key difference is that there is a level playing field. You cannot ‘pay to win’, or even gain any kind of advantage through your purchases. All heroes are released into the hero pool free of charge. Dota 2 generates its money through selling cosmetics, tickets to professional tournaments, and other additional content, such as the Compendium for The International 2013 – the biggest tournament in e-sports history, with a prize pool that grows as more Compendiums are sold. And even if you don’t wish to spend any money whatsoever on the game you will still acquire cosmetics of your own. That's because there is an RPG-like experience and leveling system, whereby after each match you’re given experience. Each time you level up (and sometimes even when you don’t) you’re rewarded with a random item, which can be equipped on a certain character, traded with other players for a different item, bet on the outcome of competitive matches, or sometimes even sold on Steam’s Community Market. 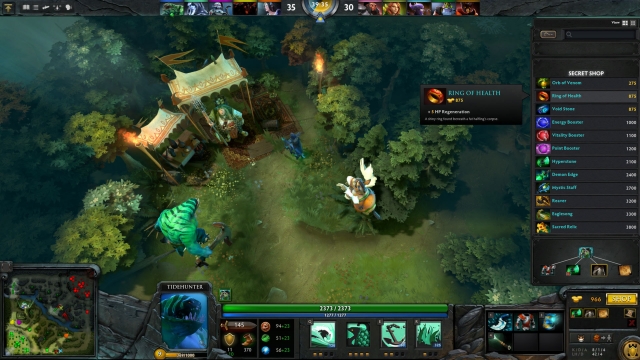 It’s a great way to keep people coming back and motivated to play just that one more game. If the standard game’s not your cup of tea then you can play custom game types with friends or through the chat lobbies, such as the ever-popular Mid Wars or Reverse Captain’s Mode. Occasionally there are also seasonal events, such as the Halloween-themed Diretide and the Christmas-themed Greeviling, which allow you to play fun side games for items for a limited period of time. It’s a game that could last you a lifetime. There aren’t many games I would say that for, and the fact that it is free makes the value proposition of Dota 2 mind boggling. There are a few missing pieces to the puzzle. Custom maps aren't up and running yet, and the matchmaking could almost certainly still do with some heavy tinkering (oftentimes matches don't feel particularly balanced, which is a problem that plagues the genre as a whole) and there are still a handful of heroes to port over from the original Dota, but I'm confident that all of these issues will be worked out, albeit in Valve Time.

Dota 2 has its claws dug well and truly deep within me. It is my personal game of the year so far, though I anticipate I’ll be the only one on staff to vote that way later in the year when voting commences, and I have a hard time imagining anything due for release in the next few years will eclipse Dota 2 in my mind's eye. If you’re wondering what all the fuss is about then you have no reason not to dive in – it’s a free to play title without even a hint of ‘pay to win’ - but don’t say I didn’t warn you; Dota is a truly brutal beast.

This review is based on a digital copy of Dota 2 for PC.