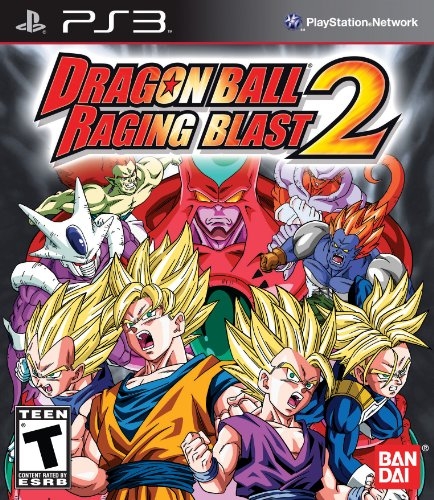 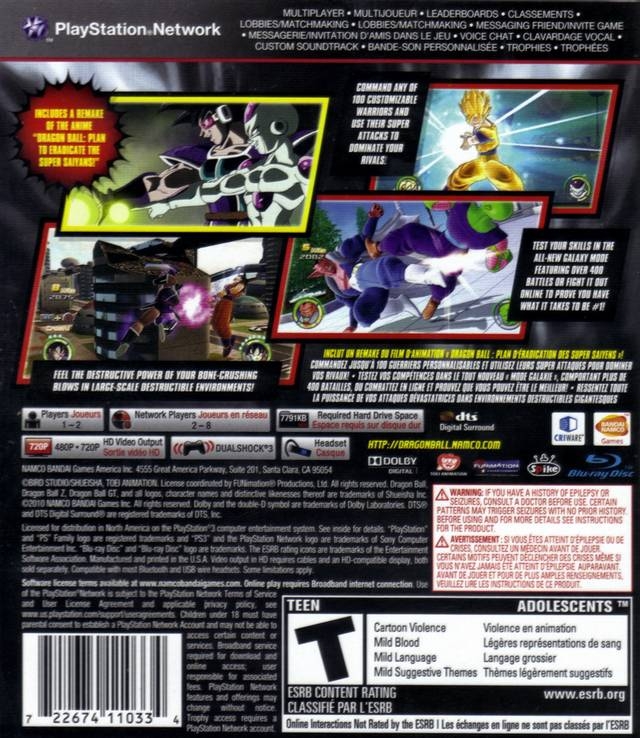 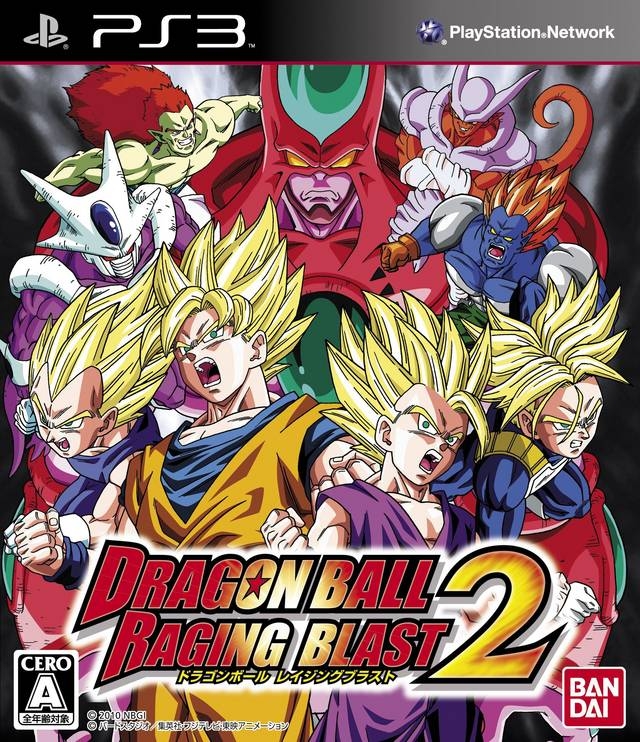 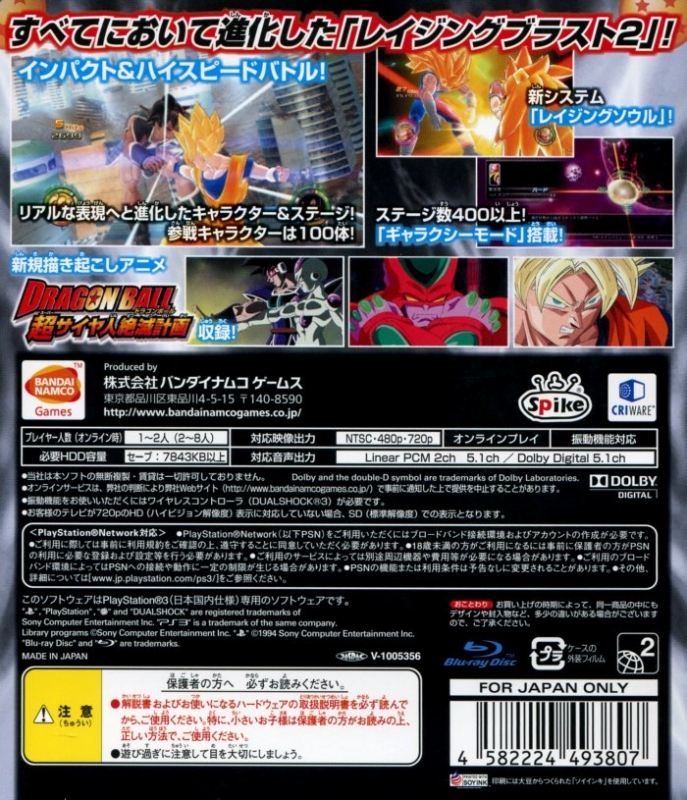 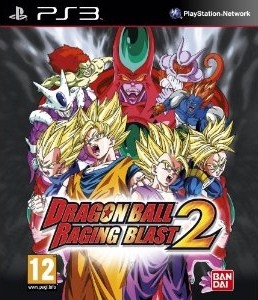 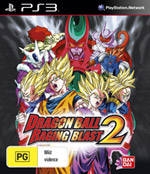 It’s fair to say that Dragon Ball has become a worldwide cultural phenomenon. In the 26 years since the manga’s debut in Japan, the entire world has been introduced to Goku and company through many mediums, including video games. Namco Bandai has brought us another Dragon Ball video game this year with the release of Dragon Ball: Raging Blast 2. Does it set the bar for all Dragon Ball games, or fall into the pack of Dragon Ball titles of the past?

All playable characters in this game share many of the same moves. There are melee combo moves and smash attacks for close-range combat as well as charged up attacks, throws, and crashes. You can charge Ki to fuel Ki blast projectile attacks, which can be charged to do more damage. Ki also fuels the ability to dash across the stage towards your opponent, both on the ground and in midair. There are a number of dodge and counter moves to avoid taking a pummeling. Each character has their own set of special moves that can be activated with enough Ki. This keeps the giant roster of 90 characters from being the exact same fighter. The specials include iconic attacks that have made Dragon Ball famous; such as, the Kamehameha, Kaioken, Special Beam Cannon, Destructo-Disk, and many more. If you don’t like the default control setup, you are able to change the setup. Battles are fast-paced and full of action; so the camera has its work cut out for it trying to keep a good angle on the entire fight. For the most part, it does a good job. However, when two fighters are at different altitudes (one high, one low) the camera tends to lose track of your opponent completely. This is a terrible situation to be in as you will have no idea where your opponent is, and they could easily approach from off-screen and give you a walloping. As this game is based off of an anime, developer Spike wisely chose to emulate the art style of the anime; and the result is stunning visuals. Both the characters and scenery look like they have been pulled directly out of the anime. This makes the fights feel authentic; as if you are watching an episode of Dragon Ball Z while you’re playing. This atmosphere is created through the use of camera angles, particularly during the special attacks which present the moves in epic fashion; similarly to what is seen in the series.Audio is solid, as the background music provides many upbeat tempo songs to serve as the backdrop for combat. Though it never gets in the way, it never really stands out, either. The sound effects are well done, and are what you would expect from the attacks on-screen. There is the option to switch from the English voices to the original Japanese voices, which will please purists.Single player has four modes of gameplay. Tutorial and Training modes get you up to speed on how to play, which is important to those who are new to the series as the learning curve can be a bit steep for newcomers. Galaxy mode is the main single player campaign, which takes you through numerous missions for each individual character. Add in all 90 characters, and this mode can last you a long time. Numerous unlockables are rewarded for completion of missions, including new costumes and pictures of moments in the anime. This mode feels ripe for some sort of overarching story, but instead you merely move from fight to fight. Players without a previous attachment to the characters of this series may find it difficult to wade through the monotony of battle after battle, particularly as players reach the Hard, Very Hard, and Ultimate difficulty battles that will push them to the limit. Battle Zone has you fight a series of battles culminating in a final battle with the leader of that zone, and serves as a secondary way to play alone if Galaxy mode becomes tiring. Local multiplayer is your standard fare of Single Battle and Team Battle. Single Battle is a 1-on-1 duel, while Team Battle allows both players to create teams of up to five characters to fight with. Additionally, there is a Power Battle mode that limits teams to a certain power level, determined by the player. This can prevent a stacked team of Super Saiyans for example, and forces more resourceful and thoughtful team management.Online multiplayer is separated into Standard battles to fight with normal characters, as well as Freestyle battles to fight with enhanced characters as well as characters with items equipped. Both modes have ranked and non-ranked options. There is also a World Tournament mode where you can invite numerous players to a multi-round tournament for ultimate bragging rights. Online play ran smoothly for me on both Xbox Live and PlayStation Network.The major issue with Dragon Ball: Raging Blast 2 is that, while it provides great value for those already fans of Dragon Ball, it does little to attract those who are not big fans. Those who are fans will already come into this game with an attachment to the 90 characters on the roster, thus deriving more enjoyment out of each battle as well as the many awards given for completing missions. Those without that connection to the series will not likely develop an attachment as the game is ultimately little more than a successive string of battles; not giving uninitiated players much of an explanation as to who these characters are and why the player should care about them. These players are also more likely to become bored by the very similar playstyles shared between every character; eventually feeling more bored then they are having fun. Dragon Ball: Raging Blast 2 does an excellent job at catering to its already existing fanbase. That group of people will find much more enjoyment out of this game then this review score would indicate. However, to those who have been on the outside of the Dragon Ball craze, this is not the game that will convert you into a fan. Beneath its Dragon Ball coat of paint lays a basic, monotonous fighter that does not stand out among the numerous fighting game options out there.