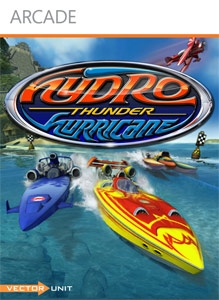 If, when you load up the trial of Hydro Thunder Hurricane, you feel a pleasant twang of nostalgia upon hearing the announcer boom the words ‘Hydro Thunder!’, then you have to buy this game. Hurricane isn’t just for nostalgic fans though; this is no lazy port of an aging classic. It’s a full-blooded sequel, with brand new tracks, vehicles, presentation, and multiplayer. You would be hard pressed to find a more fitting game for the Summer of Arcade promotion.

Hurricane stays faithful to its roots throughout, so if you’ve played the original game then you’ll instantly feel right at home. For the newcomers amongst you, though, Hydro Thunder is essentially a powerboat racer with a few twists. An arcade racer in terms of both its style and handling, you race around unique and unusual tracks, full of shortcuts, obstacles, ramps and boost packs. The controls are simple – analogue stick for movement, A button to accelerate, RT to boost and X to jump. I think there is also a reverse button somewhere, not that you’ll ever need to use it, right? Right. 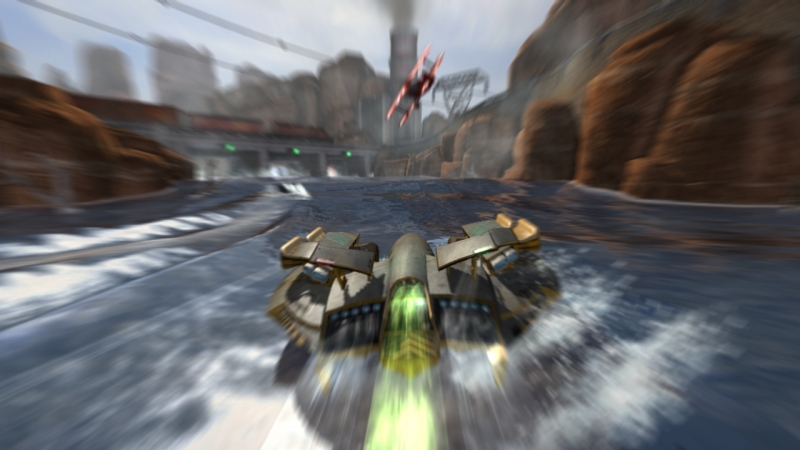 The gameplay is fresh and enjoyable, and the fact that you’re racing on water is part of what gives Hydro Thunder a distinct feel, with the natural ebb and flow of the water adding an additional strategic layer compared to most other racers. Learning how to approach the huge waves and the ripples caused by trigger points around the tracks also forms part of the learning process, which goes beyond just memorizing all of the different routes like you normally would.

Hurricane’s race structure is also quite distinct. Not only do you start each 16-player race in last place, but the distance between each vehicle on the starting grid is huge, to say the least. The result is that, even if you’re an expert at the game, you’re not going to be reaching first place until most of the race is over. If you’ve ever given the computer a 30-second or so head-start in a racer, then that’s essentially what happens here; you’re playing a game of catch up in every race. On the one hand, it does keep you on the edge of your seat. Will you or won’t you get on the podium before you run out of track? On the other hand, it’s a slightly cynical attempt to make races competitive. Why, after all, go to the effort of creating serious AI competition when you can just give the AI a simple head start? And this is perhaps Hydro Thunder’s weakest aspect. You never really feel like you’re racing against the other speedboats in a competitive way, you’re just zooming straight through them without any sense of jostling for position. 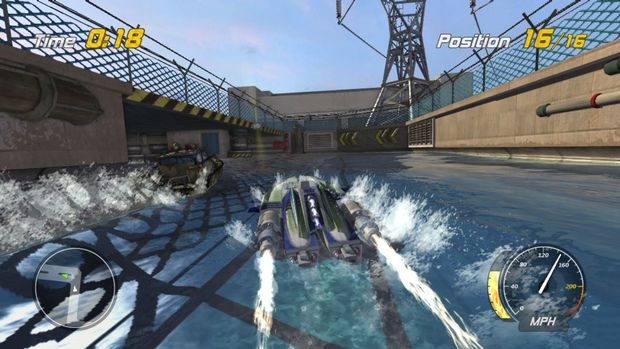 As well as your standard 16-player races, there are also two other race types to be found. First up, there’s ‘Ring Master’. Here, the track is covered in massive Sonic-style rings, and the aim is to race through them all as quickly as possible. Each ring you pass through results in fuel being added to your boost meter. Miss one out, though, and you lose all of your boost fuel and get a time penalty. The final race type is ‘Gauntlet’, and much like Ring Master, it’s essentially a time trial with a slight twist; the twist being that the course is covered in exploding barrels that you have to avoid. There are also ‘Championships’, but these are essentially just mini tournaments that consist of a handful of each of the 3 different race types.

The inclusion of extra game types is always great, but in Hydro Thunder it almost detracts from the core of the game. If your aim is to complete all of the single player events then most of the time you’ll be competing in Ring Master races, which means that the most enjoyable events – the standard races – end up forming only a small part of the main campaign. I would have preferred a greater focus on standard races over the extra modes.

The tracks are the most impressive part of Hurricane. The HD visuals do wonders at making the water look great, and the water physics ensure that it feels like you’re speeding along on water. All 8 of the maps are unique, and, although fans of the original game will see a number of familiar themes, there’s nothing like it on the current generation of consoles. Considering this is ‘just’ an XBLA title, the maps are huge in scope; tracks are lengthy, full of trigger events and explosions (from UFO tractor-beam sequences, to dive bombing planes and various sea monsters), and riddled with short cuts and alternate routes. 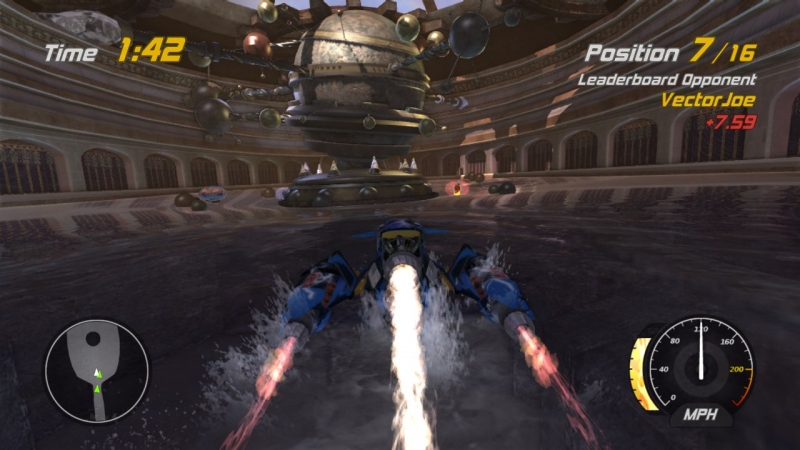 The original Hydro Thunder was full of colour, and Hurricane is no different. Everything, from the bright menu screens to the speedboats themselves, is bright and over the top. The locations featured in the tracks are similarly bold, from the psychedelic Area 51 and alien planet, to the overgrown jungle full of massive insects, to the frozen level with its Viking-inspired axe-wielding sea monster. There is not much to complain about on the graphical front, aside from some occasional clipping, although this is very much a minor issue. The music is pretty good – very upbeat and adrenaline inducing, much like a traditional arcade racer.

Value is another of Hydro Thunder Hurricane’s strong points. There are 8 tracks in total (compared to 9 standard tracks in the original game), and 9 vehicles. The single player consists of 40 events, as well as 10 tournaments, which should take at least 7 hours for most people to unlock (although then getting a podium spot in each one is another matter altogether). You unlock events by acquiring credits, which are granted for finishing on the podium. The credit system is universal, so if you grab a top 3 finish in a multiplayer race then the credits you earn from that are also added to your total. In this way you can unlock all of content in the game by racing in whatever type of events you enjoy most. 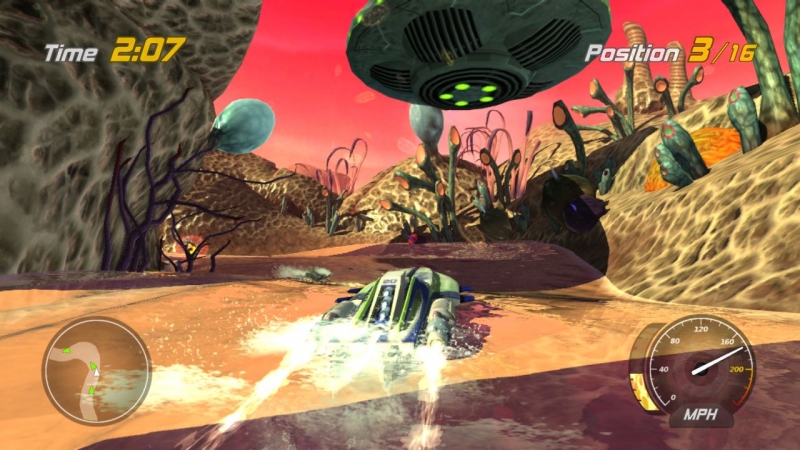 Completing various challenges will unlock additional skins for your speedboats. There are also collectible tokens scattered around the tracks - often in hard-to-reach places - and collecting all of them will take quite some time. And, as you would expect from a racing game, there are online leaderboards as well. Which leads me nicely onto the multiplayer aspect of Hydro Thunder Hurricane: there is up to 4-player split-screen multiplayer, and 8-player online multiplayer racing. I wasn’t able to test out the online multiplayer (for obvious reasons), but I’ll be straight online when the game launches because I can’t wait to test out the ‘Rubber Ducky’ mode, where players are broken down into two teams and have to help their team’s ‘Duck’ cross the finish line first by any means necessary.

You may tire of racing around the same 8 tracks well before you work your way through all of the content on offer, but all told, despite the high entry point of 1,200 MS Points, there’s a lot of value for money here. Hydro Thunder Hurricane is a textbook example of how to revive a classic game on XBLA; everything has been updated to match the standards set by modern gaming, yet the essence of the original still shines throughout.