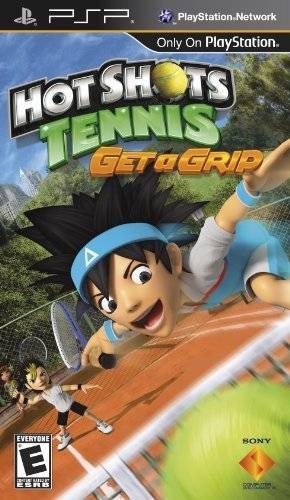 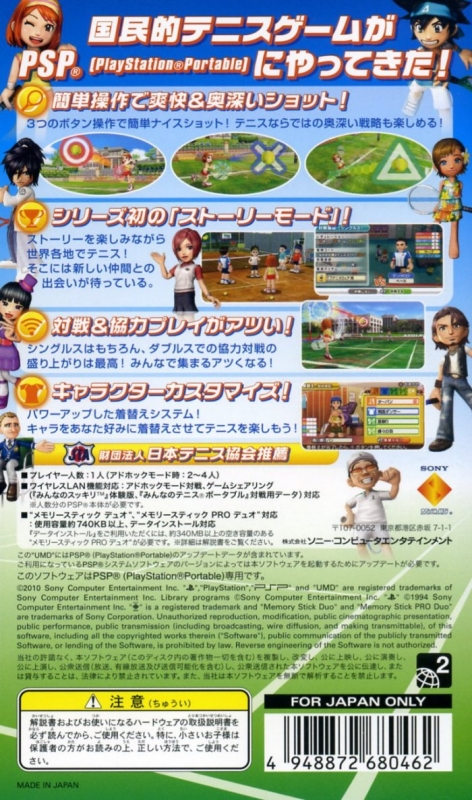 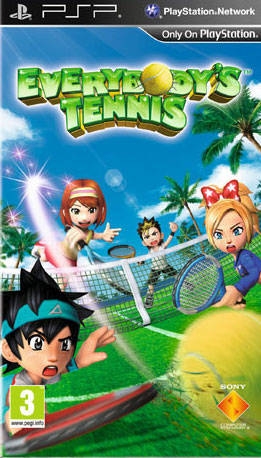 Hot Shots Tennis: Get a Grip

Ever wondered what the lovechild of Pokémon and Virtua Tennis would look like?

Well now you might just get to see it in action. In its simplest terms, Hot Shots Tennis is a cutesy mix of Virtua Tennis gameplay and Pokémon-esque RPG story, exploration, character acquisition and leveling. In the single player campaign you play as an up-and-coming member of the Love Tennis Club and it’s your mission to seek out people that have in some way lost their love of tennis, and then thrash them in a game of tennis... at which point they fall in love with it again. Counter-intuitive concept aside, it works really well, and that is in large part because it’s almost an exact cut and paste of Pokémon. That is not to denigrate either series; Pokémon is one of the most successful franchises in the industry and its ability to hook you in and devour days of your life is almost unparalleled. Transported to the world of tennis, the Pokémon gameplay style works brilliantly, and is only a handful of tweaks away from being almost as good as the game it emulates so much.

The story is set up into separate missions. Each mission requires you to visit a new area of the world, explore your surroundings in search of clues as to the whereabouts of that level’s ‘boss’ (the person that needs their love of tennis rekindling), and then fight your way through their minions before finally defeating them. Games of tennis form the battle system, with the amount of games, the various gameplay stats of your opponent and some minor rule changes (such as whether 40-40 results in deuce, or simply that the next point decides the game), all varying over time and thereby increasing the difficulty. The personality of different characters is much more prominent than in Pokémon though, and one of the few advantages Hot Shots Tennis has over the franchise it draws so much inspiration from is in the area of story, where there are genuinely interesting and varied characters and each level has its own unique storyline. 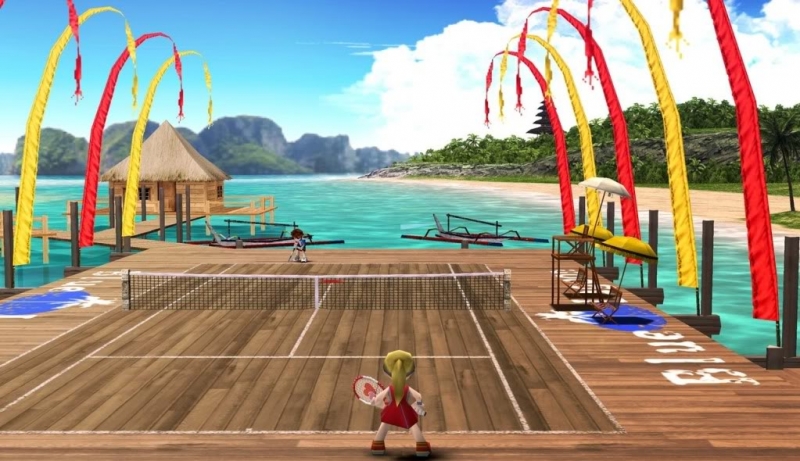 The tennis gameplay is deceptively simple, often mirroring that found in Virtua Tennis. You perform standard top spin, slice and lob shots, using the X, Circle and Triangle buttons respectively. There are also 3 different serve styles which you can use, once you unlock them all. A combination of timing and use of the D-pad determines the direction and power of your shots, and by getting into position early you can dish out even greater speed and precision.

One key difference from Virtua Tennis is that lob shots are much more effective in Get a Grip, whereas in Virtua Tennis the enemy AI will often re-position itself quickly enough to return the ball. In part this is because Hot Shots Tennis allows for a more varied approach to winning a point, and that’s a welcome advance, but it’s also due to sometimes wonky AI that will miss a ball the character should have been capable of reaching. It doesn’t happen too often, but I have been saved from a sticky situation more than a few times thanks to a desperate lob that the AI should have returned with a smash but failed to even hit. This can turn from relief to exasperation when you start to play doubles with an AI teammate though (something you’re forced to do throughout the campaign).

The gameplay isn’t quite as fast paced or compulsive as Virtua Tennis, but Virtua Tennis’ gameplay, for me at least, is the guiding light when it comes to arcade tennis. So the fact that Hot Shots Tennis comes admirably close to matching it is a fantastic achievement in and of itself, but ideally I would love to be able to build up slightly more power and accuracy with my hits. 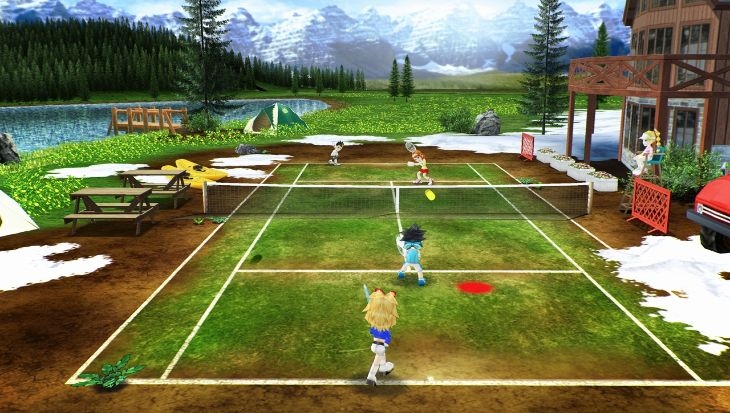 Where Hot Shots Tennis wipes the floor with Virtua Tennis is in the RPG system of rewards and improvements that offers something more besides addictive gameplay to keep you coming back. Over the course of a match your performance will earn you points. These points can then be spent in the shop on hundreds of clothing items, accessories and tennis rackets. By purchasing more items for your characters you level up, gaining additional stats for your characters, from stamina and speed boosts, to increased power and control. That is not all though; you also gain loyalty experience when you win a match with a character. Leveling up a character’s loyalty will unlock new moves, like flat serves or air shots. Finally, you also acquire new characters by defeating the ‘bosses’. Once defeated, a boss will decide that tennis is their true calling and will then accompany you on your journey. Then, at any time, you can switch to and use that character; level them up, gain loyalty and deck them out in fancy and ridiculous costumes.

The difficulty curve is perhaps overly generous. You can easily spend the first few hours of the game never facing any serious challenge. However, towards the end of the game - unless you really grind out points and experience - you should start to face some tough competition, which is when the game is at its best. 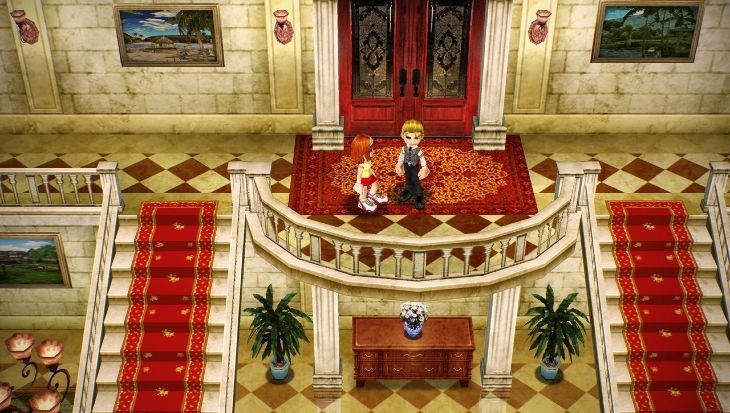 Visually, Get a Grip looks great. Each new level takes place in a unique area, and the tennis court where the ‘battles’ take place also fall within an individual level’s theme. As you play through the game, you unlock the different tennis courts by winning matches on them, so eventually you build up a large collection of unique and varied tennis courts to play on. The characters you come across are just as varied, with memorable lines and stories. The silly narrative does tire after a while, and you may eventually find yourself mashing the X button to skip it, but it’s charming and engaging at first. The music also varies from region to region and, whilst it’s never fantastically catchy, it’s decent enough. The sound effects are also good; your standard tennis racket thwacks and cutesy character emotes all feature prominently.

There are plenty of little touches that add to the child-like silliness of the game, such as interactive tennis court features, like a helicopter you can set off by hitting its blades or a dog you can hit to send it racing along the baseline dragging its owner across the ground. There are also costumes and accessories you can decorate your characters with, such as a panda outfit or a pirate’s eye patch, and there really is loads of stuff to choose from.

The story takes about 15 hours to complete, although that still leaves you with a couple of characters to unlock, as well as countless items, accessories and hidden areas to discover. Once you complete the game, you also gain access to a guide that lists every possible character you can battle and how you performed against them, which is ideal for those who want to truly complete the game. Get a Grip should keep you fully engaged throughout most of its single player run, thanks in large part to the leveling and unlock systems I detailed earlier, so it has a fair amount of lasting appeal. 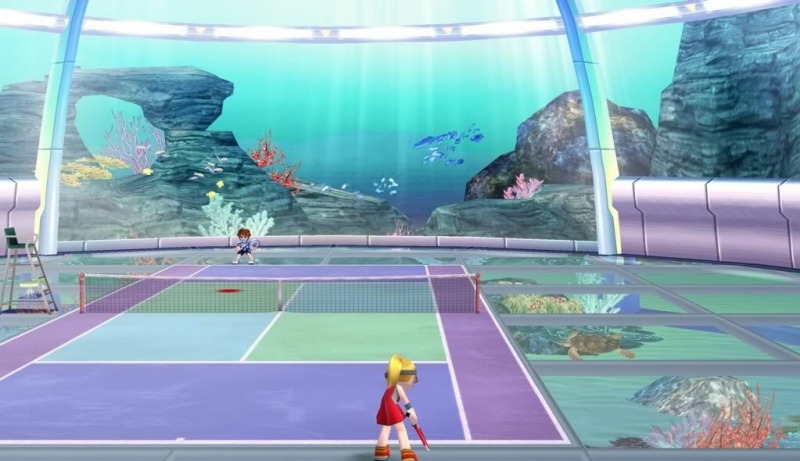 If you just want to play a simple match, then you can select exhibition instead of story mode. Here you can opt for a singles or doubles match, choose the court, characters, precise number of games and sets, and even select your umpire. There is also a local multiplayer mode, and game sharing, so you can play with any of your PSP-owning friends. The lack of online multiplayer probably restricts the game to a single player-only experience for most people, but it’s easy to imagine that any online multiplayer features would go largely unused, so its omission is understandable. There is also a medal system, which rewards you for completing certain goals, such as 100 return aces. Finally, there is a stats page, which lists a whole host of the gameplay statistics that you’ve built up throughout your time with the game.

The gameplay isn’t quite up there with Virtua Tennis, and many of the RPG mechanics aren’t quite up there with Pokémon either, but it comes damn close in both respects, which is quite an achievement, and results in a really great tennis RPG. If you’ve ever wished for Virtua Tennis to have a fleshed out campaign, or at least something which meant that its single player offered genuine longevity, then this is the game for you, because the RPG and story elements both succeed brilliantly in keeping you hooked throughout most of the game.