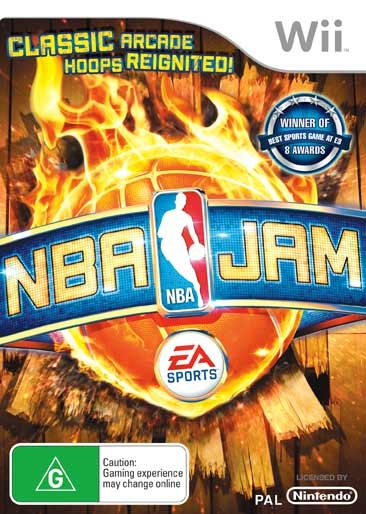 “He brought the boom, but not a lot of ‘shakalaka’.” – Tim Kitzrow

I bet I know what you just did. You took one look at the score above, and immediately thought, “Hey, what’s this guy getting at? He gave NBA Jam one of its lowest scores on the internet!” As a huge fan of the franchise, I unfortunately found this latest entry from EA to be quite middling. You may remember that I walked away extremely happy from my E3 demo of the game (heck, we even gave it our Sports Game of Show award). Well, in that scenario, I only got to play the game’s four-player multiplayer, and I can assure you that all the praise I heaped on it then still applies to that mode. However, there are some unacceptable quirks when any amount of computer AI is involved that can make the experience frustrating beyond belief.

First, the positive: this game is a fantastic multiplayer experience. NBA Jam is the franchise that started the ‘wacky take on real-life sports’ sub-genre, and EA has taken care to take the ingredients that made it successful back in the day and upgrade them for modern times. This is no simulation like the NBA 2K series—Jam is over-the-top cartoony and proud of it. Wanna jump fifty feet in the air to make a dunk just because you can? You got it. There are few rules —save for shot clock violations and goaltending, all penalties have been removed. This means you are free to shove your opponent to the ground or run back across the half-court line with no repercussions. The action is fast-paced, and the animation on all players is highly exaggerated, giving the game a definite energy that many of its contemporaries in the sports genre lack. If only the same held true when computer players are added to the mix.

When playing in single-player or two-player modes against AI competitors, the game turns into an exercise in monotony and unfairness. First, there’s the rubber-banding. Several times, I’d fought tooth and nail the entire game to give myself a nice lead, and all of a sudden, in the final minute of the game, the AI went into godly mode. It started making every shot, became impossible to steal from, and inevitably regained the lead just before the buzzer. To a certain degree, it adds challenge and suspense when a game features AI that adapts to your skill level. However, here it is taken to an extreme that that completely nullifies any sense of accomplishment. Imagine yourself playing a real game against LeBron James, and you’ve got a pretty good idea of your odds in some matches of NBA Jam.

That’s not to mention the glitches. Oh, the glitches! In the Jam series, if one player makes three baskets in a row without the other team scoring, he is set ‘on fire’, during which time he can easily knock down other players and his shots are extremely difficult to block—a state which continues until the other team scores. The unfairness of this mode is typically balanced by the fact that you must work hard to earn it. However, on two separate occasions, my opponent began the game on fire, and no matter how many times I scored I couldn’t put him out. The stats of players are deceptive, too, as I found myself sinking more three-pointers with players that had a four or lower in that area than those who had an eight or higher. In an attempt to spice up the traditionally-dull single-player experience of a sports game, EA has included a mode called Remix Tour, which alters the formula with several gameplay variants. First, you can play a game of 21, in which three players attempt to score the titular number of points. However, unlike the real game, your score does not reset should you go over that number, eliminating any semblance of added strategy. Toss in a boss battle against Magic Johnson, who really is magic and can teleport around the arena, and you’ll soon come to absolutely despise this mode. Domination, in which players attempt to control areas of the court by scoring from inside them, is more fun since the momentum can shift very suddenly, but as you have no teammate in these modes, the crucial gameplay element of passing the ball doesn’t even factor in. The only Remix mode that’s worth anyone’s time is Remix 2-on-2. In this mode, you play the standard NBA Jam game, but powerups appear around the court that make you run faster or become impossible to knock down, among other things. This mode is quite a bit of fun, and adds to the zany nature of the game.

Really, though, the only reason to play Remix Tour is to unlock new players. Some of the best, however, are unlocked in unique ways which I won’t spoil here—let’s just say that by the time you’re through with NBA Jam, you’ll be saying “Yes we can!” when your team is behind and the clock’s ticking. As mentioned, the saving grace of this game is when you can experience it with other players. Swiping your Wii-mote upward to block their potential game-winner when they’re one point down feels great, as does deking through their defences to score a legendary dunk. I was down by eight going into the fourth quarter, and the rush that I felt when I scored dunk after dunk against my friend in the final minute was probably worth the price of admission on its own. Too bad there’s no online play in this Wii edition so that you always have a human opponent to play against.

As uneven as the rest of the game is, the presentation deserves some props. In an interesting approach to 3D characters, players’ bodies are modeled with polygons while their heads are actually 2D images of the real person’s face. This gives the game a real energy, as the animation is fluid and faces look really over-the-top intense when going for a dunk. The entire thing just feels so wacky that the unlockable Raptors mascot doesn’t feel out of place on the court whatsoever. I recommend turning on big-head mode as soon as you unlock it, as it just makes everything look so damn funny!

The most memorable part of the Jam series has got to be the in-game commentary by Tim Kitzrow. Ask any old-school gamer what comes to mind when they think ‘NBA Jam’, and they’ll most likely shout “HE’S ON FIRE!” Luckily, EA realized that Kitzrow is a big part of the series’ charm and brought him back on board for this instalment. Of course, being on a Wii disc means the developers could cram a whole lot more dialogue in there than the SNES and Genesis’ cartridges could handle. This means we’re treated to an endless string of corny-but-great quips like “He just served up a peanut butter and JAM SANDWICH!” In an intense match, Kitzrow keeps you fired up better than a Red Bull ever could. The value you get out of NBA Jam will be directly proportional to how much access you have to three willing friends. There’s a two-to-three-hour campaign mode in which the AI either has silly advantages or is just plain way too good, and an exhibition mode that’s... exactly the same. But when you are able to get a full posse of four in front of your TV, the good times can go on for hours! It is a seriously fun game in multiplayer.

And that’s NBA Jam in a nutshell; a fun multiplayer game that is noticeably lacking in the single-player department. Sure, most sports games focus on the multiplayer, but most sports games also feature online play (even on the Wii) to take advantage of that fact. The zany graphics and energetic dialogue from Tim Kitzrow put the ball in the player’s court in the end, but it’s not enough. If you only have a Wii and you want to relive the good times you had with the arcade and sixteen-bit versions of this game, check it out with friends, and you’ll have a good time. Otherwise, I’m going to recommend you wait for the upcoming PS3 or 360 version of this game, both of which actually will feature online play. For the most part, NBA Jam on Wii is, to quote Kitzrow himself, “All that Shake N’ Bake but no dip.”