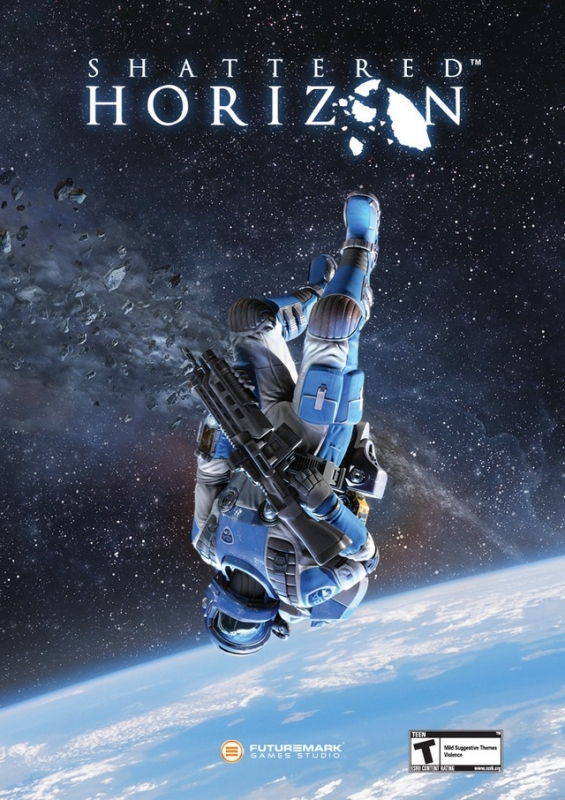 Zero gravity has always been a questionable modification to modern multiplayer shooters, love it or hate it. The biggest problem: decreased accuracy associated with the lack of cognitive motion. This lack of control makes judging distance and observing enemy movement difficult.

Enter Futuremark Game Studios, a brand new game company which is a subsidiary of Futuremark Corporation. With Shattered Horizon, their first attempt at a video game, they have managed to shake-up the FPS genre with the first fully zero-gravity shooter. Shattered Horizon takes gamers into space, in a battle between two factions vying for control over the remains of the moon and International Space Station. Players must learn to fight weightlessness and disorientation to survive and attain victory.

Shattered Horizon is set forty years in the future. A mining explosion on the moon destroys its surface, sending debris into orbit around the Earth. The debris is named the Arc, due to its shape, visible in Earth's night sky. The two factions at wars are:

-The International Space Agency: a group of scientists and astronauts, and
-The Moon Mining Cooperative, charged with the destruction of the moon.

The more space either side controls, the better their chances of survival.

The controls in this game are rather unique. Due to the lack of gravity, spacesuits must be able to turn 360 degrees quickly, and the controls simulate this. Watching films of astronauts floating around in spaceships shows how they deal with weightlessness. Shattered Horizon's developers seems to have taken notes, perhaps visiting a space camp, and have managed to accurately convey the feeling of being in a zero-gravity environment. Using jetpacks, players can easily navigate the levels in the game.

Content-wise, there isn't much to speak of. Players have access to just one gun with three different grenades. That can easily be overlooked, as it balances the playing field. The major issue is that there are only four maps. Futuremark Game Studio has promised free downloadable maps in the near future, but this game costs $19.99 USD, making it $5 per map, an exorbitant price.

Gun-play is the one aspect of the game made difficult by zero-gravity. The machine gun in this game doesn't have much recoil when unloading full clips, but if you zoom in and use it as a sniper rifle, prepare to be sent flying. The easiest way to solve this issue is to grapple onto one of the many floating pieces of debris, then snipe your enemy. Sniping, however, is quite useless in this game. If you fail to affix yourself to an object, good luck hitting anyone.

The three types of grenades also seem useless at times. The major issue is their weak range. They travel no more than 20 feet in front of you, rendering them nearly useless. [Dry] Ice grenades release a cloud of steam, which is useless, because the player's name remains visible. This makes the Ice grenade more of a temporary distraction than anything else. Explosive grenades work exactly as expected: they explode. Of course, due to aforementioned lack of range, the only time this will kill an enemy is if they are within melee distance. The only worthwhile grenades are the EMP Grenades. These have a decent effect radius and temporarily disable a player's ability to move. This is a useful method of crowd control in some of the tighter corners of the game's maps..

Futuremark Corporation is known worldwide for its technologies in PC benchmarking software, so it isn't much of a surprise that any game released by Futuremark Game Studios punishes hardware. Shattered Horizon does not disappoint in terms of pushing hardware every way the 3D Mark benchmarking tool does. This is a Direct X 10 only game (so no Windows XP users allowed), which allows for high-contrast colors and amazing light rendering. While this is no Crysis, its a beautiful game.The experience of seeing the starry universe and glowing Earth in Shattered Horizon can only be topped by viewing NASA's photos or seeing them yourself by becoming an astronaut.

Audio for this game is pretty generic. Machine guns and the grenade launcher sound exactly like every other FPS. Explosions are the same as every other game. The only things that are unique are the EMP and ice grenade sounds, as no other games have these weapons. The EMP blast gives a unique "thump" sound that sounds straight out of Star Wars. The ice grenades sound like a smoke grenade. Menu music is a small instrumental piece, similar to pieces found in Final Fantasy, or action scenes in Sci-Fi movies.

Overall, Shattered Horizon is a good game, hurt by massive lack of content. The game is beautiful and pushes PC hardware to its limits. Unique combat settings mixed with what can easily be called perfect zero-gravity controls makes this game a must play. Playing fields are even, and strategy is the key to victory. Though there are currently only four maps to enjoy, more are coming in the future.