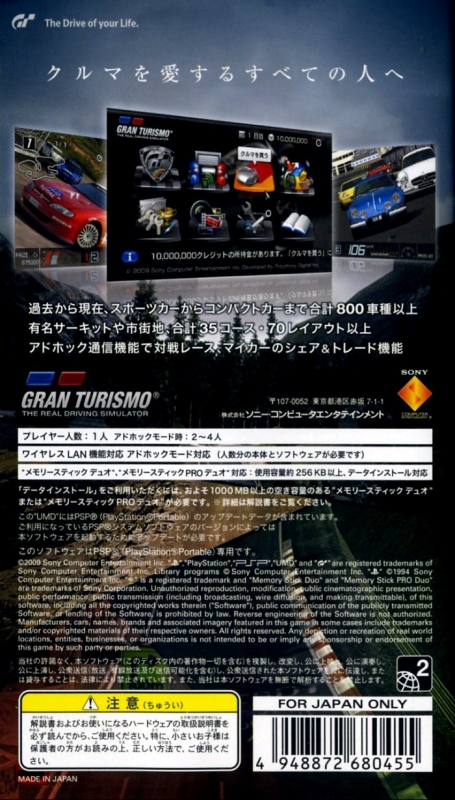 I remember the day I originally purchased my PSP. I was beyond excited with the thought that the authentic PlayStation experience would be accessible from my pocket. No game better encapsulates that PlayStation experience than Gran Turismo, which I was sure would be my first purchase, but then I discovered the shocking truth. Gran Turismo was not available at launch as promised and the wait would be over four years long. However, that is all in the past and the meticulous developers at Polyphony Digital have finally delivered the game, but it may not be the exact racing game PSP owners have been eagerly pining for all this time.

Right off the bat Gran Turismo lives up to the expectations set by its predecessors in terms of being aesthetically pleasing. The menu system serves as your main hub for everything in the game. A rolling ticker at the bottom of the screen cycles through all the pertinent information concerning your driving activities, including the dealerships available on a certain day. The game utilizes a calendar system that jumps between days following the completion of certain events. Traversing the interface is generally a smooth experience only hampered by lengthy load times (note: this review is based on the UMD version). A solution to this problem is offered with the ability to install the disc data onto your memory stick. The 750 MB of space required is hefty but this does noticeably diminish the length of the loading screens.

Musically the game is the same as always. Showroom Jazz fills out the background music and Rock tunes take over while driving. The music is okay but at the same time rather generic, so upload your own soundtrack as soon as the option is made available. The other sound design is admirable, with car effects which sound convincing even if not completely authentic.

The most touted feature of Gran Turismo on the PSP is the whopping 800 cars and 35 tracks fully playable in the game. The visual prowess of the series makes its way onto the portable screen well intact. A solid 60 FPS framerate is maintained throughout with only very minor technical hitches popping up. Replays can still be beautiful and provide entertainment just by watching them. The car models are well detailed and look good from almost every angle. The in-car view, while nice, does not feature any interior detail of the cars, but does come with a functioning side mirror. The look of the tracks follows in the same vain. Each track appears and feels authentic, including the original, dirt and snow courses.

Due to anticipated coverage, gamers must be wondering why the aforementioned excessive roster of cars and tracks takes center focus whenever the game is mentioned. The disappointing answer is that Gran Turismo offers little else in the way of features. Chief among these disheartening absences is the complete lack of a career mode. At this realization, the game stops being interesting altogether for most hardcore racing fans. In a sense, such a reaction seems justified because a big hook of the franchise is rising through the ranks, tuning and racing cars to your heart’s content. Gran Turismo offers none of that, leading to an overwhelming sense that it lacks structure.

One thing to keep in mind is that the boxart bears the phrase “Driving Simulator” rather than “Racing Simulator”, so while your racing options are limited, there is much more to do in the way of driving. Case in point, the Driving Challenge mode is essentially the system of trials you are required to complete in order to acquire racing licenses in previous games, sans the necessity to earn a license. The 100 or so of these events run the gamut from basic turning to professionally overtaking opponents. These challenges can acclimate newcomers to the driving mechanics and will even improve the skill of seasoned players who take the time to master them. That being said there is no real reason to complete these at all. The only reward other than credit is unlocking the ability to upload your own music tracks into the game.

For those who prefer a bit more racing in their racing games, the single race mode is your only option. Here you can race against a paltry maximum of three AI controlled cars. This is where you will make the majority of your credits to spend on new cars to race and complete your garage. By racing on each course you unlock more advanced ranks for said course, which equates to harder AI, and a bigger cash reward for completion. The only variables you have control over each race are the rank, number of laps, and (when available) course direction. It would have been nice if you could have staged tournaments or even string races and other events together, instead you are forced to back out and contend with load screens any time you wish to change events.

Thankfully, the quality of the racing is maintained. The controls are surprisingly responsive and adaptable, even when it comes to the analog nub. The sense of speed feels authentic. Everything from distinctions between car handling to features unique to each track are relayed to the player through the gameplay. As such, you will find yourself squeezing your PSP when you nearly careen off the track while trying to hold on to your lead like you would the actual steering wheel of your car.

That is not to say the racing is perfect because perennial problems with the series, and the genre in general, persist. There is no simulated damage to your car, so the feeling of racing bumper cars is in full effect. You can of course exploit this to use opposing cars as brakes when making a wild turn or bully your way to the head of the pack. The AI still adheres stringently to the racing line, making it predictable in all but the toughest difficulties.

The two other driving modes available are Time Trial and Drift Trial. Time Trial is exactly what it sounds like, a race against the clock and sometimes a ghost (of which there are no pre-programmed ones) for the fastest lap time. Drift Trail is the same as it appears in Gran Turismo 5: Prologue. Here you will cut through specific turns and corners with the longest, most stylish drift possible. It is still a fun mode, although you do earn significantly less credits than racing and you are limited in the number of vehicles you can use.

Minor annoyances rear their head from time to time. The calendar system means you will only have access to dealers on a random basis. Even if a dealer does appear in the queue it does not guarantee every car from that manufacturer will be available at that time. There is no checklist signifying what cars you do and do not have, so you could accidentally buy the same car twice in different colors. The variety of dealers is strong, including mainstream and luxury manufacturers like Lamborghini, Mercedes, Renault, and Alfa Romeo. When Gran Turismo 5 eventually launches you should be able to import your entire collection from this version. Of course this requires you to question whether or not that would short-change the experience of playing through it.

Multiplayer is available, but only ad hoc compatible. In fact, there are no online options whatsoever. No leaderboards, game updates, downloadable content, and definitely no online player interaction. At this point in the PSP lifecycle, after such a long wait for the game itself, and considering how little else there is to do, this is inexcusable. Locally, you can trade, share, and race your car collection with those around you. Under the list of details on each car it specifies whether it is tradable, sharable, or both. Sharing means you can replicate the cars in your garage and transfer them to your friend’s, and vice versa. Trading actually requires you to give up one car for another. Competing locally is seamless and you do still earn credits that you keep. While these are all nice features, they are on the safe side. There is no game sharing option, another let down, and you can’t make any wagers when it comes to competing.

As a package, Gran Turismo will not appeal to the racing fanatics who get a kick out of tuning and the familiar sense of progression. However, it will appeal to the common car enthusiast looking to race and build up their collection while on their morning train commute. The promise of so many cars and tracks leads to a sense of value that goes largely unfulfilled. After four years in the making Gran Turismo is still a good game, some may even claim a great one. It is arguable that this PSP iteration is aimed more at casuals, and while there is nothing inherently wrong with this approach, there are some flaws in its execution.