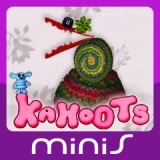 A simple, enjoyable and zany game that's always fun to pick up and play.

Kahoots is a PSP Mini: one of a collection of bite-sized games released on the PlayStation Store for budget prices. For the most part, you won’t find anything particularly deep in the Minis range, but as Kahoots shows, it is home to the occasional gem. After downloading the game from the PlayStation Network, like the rest of the Minis, you can play it on PS3 or PSP.

The basic premise of the game is similar to Lemmings: you must lead your Kahoot (only one) from the starting point of the level to the exit, collecting all of the cupcakes if you can and if you are so inclined. The Kahoot is a sort of blind mouse. He cannot see where he is going; he will simply walk until he dies, reaches the exit or hits a special block. It is the job of the player to switch these blocks around to get the Kahoot to the exit. The Kahoot moves in real time, but the game pauses when you press L1, or when you are moving a block. Falling off the edge of the screen will result in the Kahoot appearing at the opposite side of the screen. For example, if he falls off the bottom, he will re-appear at the top, and if he jumps off the right, he will re-appear on the left. By manipulating this, as well as a few other things introduced later in the game (by a charming little creature named Pegbeast), you must get the little creature to the door which marks the end of the level.

There are many different kinds of blocks which make up the traversable platforms in Kahoots. First, there is the standard block. This can take on a number of different appearances and colours, but the function remains the same: to provide a stable platform for the Kahoot to walk on. Next is the jump block: a red block with an arrow. If a Kahoot steps on this, he will be propelled forwards and up. This is useful for jumping over spikes, reaching higher platforms, or jumping off the current platform. But that isn’t all. The next type of block is the trapdoor. If a Kahoot steps on this, he will fall through onto whatever lies below. If nothing is below, he will continue to the bottom of the screen and reappear at the top. I mentioned this next one earlier: the spike block, probably the most dangerous foe of the Kahoot. Walking or jumping onto this block will result in death of the Kahoot and failure of the level (and your Kahoot jumping up and freezing, with a red circle around him saying “FAIL”). Finally, there is the reverse block. If a Kahoot walks onto this block, he will go back the way he came. Most of these blocks can be switched around: you simply hold the “X” button while the cursor is on a block, and move the arrow keys to switch with a different block. However, some blocks, marked with a bolt, cannot be switched.

In addition, there is the cardboard box. This isn’t really a block, but it is rather annoying. It cannot be switched, and performs no function other than to serve as a destructible obstacle. There are two ways of destroying this obstacle. First up is the enemy introduced about halfway through the game: the Cardborg. This nasty creature kills the Kahoot if he touches him, but also destroys cardboard boxes by walking into or falling on them. Like the Kahoot, he can be killed by spikes, and he follows most of the same platforming rules. The one difference is that he walks off the edge of platforms, rather than turning back. The Cardborg throws a spanner in the works just when you think the game has no more challenges to throw at you. While sometimes you will simply have to avoid the Cardborgs, or kill them, most of the time you will need to use them, keeping them alive as you would a Kahoot, to destroy obstacles, while keeping them away from your Kahoot.

This is where the game begins to get challenging. The first few levels are incredibly easy. The next few are still easy. It’s only when the Cardborg is introduced that things begin to get difficult, interesting and exciting. The time it takes you to finish the first 20 levels is similar to the time it takes to complete the next five. At the beginning of the game, each level will only last a minute or so. This gradually becomes a couple of minutes, and towards the end of the game, if you keep trying to figure out a level, especially if you’re collecting the muffins, it can take upwards of 20 minutes to complete a level. With 50 levels in the game, you’ll get a fair bit of play out of this.

For whatever reason, there’s no order that you have to play the levels in. They get harder as you move from left to right, but if you want you can start at the end, so to speak. You’ll fail miserably, but the possibility is there. And if you’re stuck on a level, you can just move on to the next one. This casual approach to progression stops the game from ever being frustrating. You won’t throw your Sixaxis/PSP because you can’t beat a level, you’ll just move onto the next one.

In addition to just completing the levels, you can earn awards, which serve no purpose whatsoever, but they’re there. Not very many, mind you - ten or so. Pretty much all of them are either so easy that it’s impossible to miss them during the course of the game, or so hard that you won’t bother. They revolve around destroying boxes, moving blocks, killing cardborgs, and similar achievements.

The art style is very colourful, and also simplistic. The walls and platforms are brightly coloured in greens, blues and purples, and it doesn’t look half bad. Contrary to what you might expect, the game looks better on PSP: it’s the same resolution on both consoles, but on PS3 it’s stretched to fit a larger screen. Completion of a level will result in ribbons streaming down from the top of the ceiling for a few seconds. After this, there is a short loading screen (the game only loads when entering or finishing a level), which takes only a few seconds, but is inexplicably faster on PSP than on PS3.

The soundtrack consists of a few upbeat tracks which complement the art style and general character of the game. Voice acting and sound effects consist of victory sounds, dying sounds (the Cardborg dying sound is extremely disturbing) and bouncing on jump blocks. Then there’s Pegbeast, the fellow I mentioned earlier. Pegbeast is some sort of doll made out of cloth, with a clothes peg for a beak. He speaks in a posh British accent, and sings slightly odd songs to introduce new gameplay mechanics. Unfortunately, you only get to see his awesomeness for the first half of the game, while new mechanics are being introduced.

At £2.50/€3.00/$4.50, Kahoots is cheap, even for a PSP Mini. You’ll easily get a few hours of play out of it, and it’s certainly interesting. The game isn’t particularly deep; indeed, it’s extremely simple, and if it went on very much longer it would get boring very quickly. There is little to no replay value, but you can’t expect much for the price you’re paying. What you do get in Kahoots is a charming little god game (if you will) which will keep you occupied on train and bus journeys, or perhaps a little escape from a more serious and substantial game. If you want an eccentric, zany and enjoyable game for a very reasonable price, pick up Kahoots.