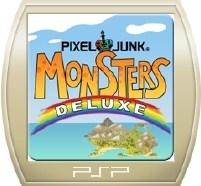 Pixeljunk Monsters is back!

This time it’s on the PSP in what looks to be its final and most definitive outing. Pixeljunk Monsters Deluxe includes the complete Pixeljunk Monsters game that was released for the PS3 back in 2008 as well as all of the content that was included in the Pixeljunk Monsters Encore expansion pack. There’s also a brand new island of levels, new enemies, towers, music, challenges, unlockables and online multiplayer - all exclusive to the PSP. Whether that’s enough new content to tempt existing PS3 owners will depend on how much they enjoyed the game the first time around. What is not in doubt, however, is that this is truly the most definitive version of the game, on perhaps its most ideal platform.

For the uninitiated, Pixeljunk Monsters is a tower defence game with a fairly standard set up. Your job is to protect a small village on the map from enemies that troop along preset paths in waves. You do this by replacing the trees that are dotted around the level with towers, drawing on the small amount of money you’re given at the start of the level and the coins you collect from enemies as they die.

The towers have different strengths and weaknesses – some are only good against air units, others only fire on ground units; some tend to be weak against individual units, but the pay-off is that they come with additional effects such as splash damage or the ability to freeze enemies, others may be quite cheap, with a good rate of fire and a long range, but low damage, and so on. This is all pretty standard fare for a tower defence game, but a number of things set Pixeljunk Monsters apart. With only a limited number of trees available to knock down and replace with towers, you’re forced to construct strategically – not only do you have to pick the correct towers for the enemies you’re about to face, but you also have to position them to be most effective and maintain a careful balance of different towers so as to ensure that you’re able to defeat each wave without you losing any of your precious villagers. Towers can also be upgraded in one of three ways. You can either use some of the rare gems you’ve scavenged from dead enemies, level them up yourself by standing at the base of a tower and performing a little dance, or just allow them to level up naturally as they gain experience by killing enemies.

Pixeljunk Monsters involves a lot of resource and time management – will you save those precious gems to unlock stronger towers, or to upgrade existing ones? Should you make a dash for that gem and the gold that just dropped before it disappears, or stay underneath the tower to gain that final slither of experience needed for it to level up? The leveling system for towers and the need to actually scavenge dropped loot yourself means that you’ll always need to be doing something productive in Pixeljunk Monsters if you’re going to succeed.

The controls are almost identical to the PS3 version, although a few small changes have been introduced to make the transition to the handheld more polished. You use either the analogue nub or the D-pad to move your character around. X is used to access the menu when you’re stood near a tree, tower or the village. The R trigger displays how much experience that all of your towers have, L pans the camera out so that you can get a view of the entire level, and the triangle button brings up a set of communication pictures for rudimentary multiplayer communication.

I have always imagined Pixeljunk games being an ideal match for the PSP. True enough, Monsters loses very little in the transition from PS3 to PSP, which means that the game’s endearing nature is actually more pronounced now that it’s on the smaller, more personal screen. Pixeljunk Monsters is more suited to the PSP in many respects, not least visually. With the great little details and hand drawn visual style all retained, the added crispness and clarity of picture you get from the PSP’s screen means that this is nothing short of a beautiful PSP game. The serene ambient soundtrack from Otograph also returns with the added bonus of new tracks for the Deluxe-exclusive island.

Pixeljunk Monsters is one of the most finely honed and superbly balanced tower defence games I’ve come across. Later stages will require you to work out not just the optimum towers for the stage and their positions, but also the order in which you need to place them, particularly at the start of each level. This requires you to be almost forensic in your approach to the game, and you’ll often need to play through levels more than once before you’ll manage to clear them. Furthermore, if you wish to collect the rainbow for each level (acquired by completing a level without losing a single villager), then you could be playing for some time.

The game consists of three islands: Tiki Island is the one from the original game and features 21 levels, Toki Island is taken from Encore and includes 15 levels, and Gati Gati Island is exclusive to Deluxe and features 11 brand new levels. On top of the new island, Deluxe also features an extra Challenge mode accessed via the Tiki Hut menu on the title screen. There are 24 challenges in all, and they unlock as you complete the levels that they’re tied to in the main game. They require you to complete a level whilst meeting certain requirements, such as never upgrading a tower or only ever having a single tower on the battlefield. The challenges are much more difficult to complete than the main levels – it’s the sort of thing expert players crave for after completing a game. You also get rewards for completing them as well, such as concept art and themes for the PSP.

The final chunk of new content comes in the form of online multiplayer. Deluxe includes both ad-hoc offline multiplayer and online multiplayer. The online multiplayer mode is a pleasant surprise – I didn’t experience any lag and there are plenty of lobby options. For example, you can meet up with a friend, join a random quick match, or you can try and find a lobby which focuses on a specific island you’re working on. The aforementioned communication pictures were designed specifically for online multiplayer – they’re adorable and certainly enhance the game’s charm, but their actual use is quite limited.

Deluxe also includes a few minor additions. There are two new towers – a gem tower and a trap tower. The gem tower upgrades other towers within its range, whilst the trap tower creates an electrical line that activates when enemies pass over it. There are also a handful of new enemy variants, including crabs, ground enemies that fly in on balloons (these require arrow towers to pop the balloons so that the units drop to the ground, and then ground towers to finish them off), and a new flying boss which drops to the ground after sustaining a certain amount of damage.

If Pixeljunk Monsters Deluxe has one downside to it, it’s that if you’re a fan of the series you may have played most of it before and will have to play most of it again if you wish to access the new island. If you don’t own the PS3 version of Pixeljunk Monsters, then I would recommend Deluxe in an instant, and I would also recommend it over the PS3 version if you’re undecided as to which to buy. However, if you already own Pixeljunk Monsters on the PS3 then I wouldn’t be so quick to recommend it, unless you just really want a copy on your PSP or you’re pretty keen to play it online.

The gap between release dates may have been lengthy, but the extra content that comes with Deluxe makes the wait worthwhile. This is the definitive version of Pixeljunk Monsters on a platform that suits it perfectly. If you don’t already own Monsters then this is the version to buy, and with the new levels, a challenge mode, online multiplayer, additional extras, and the fact that this game looks and plays superbly on the handheld, then there may even be reason for PS3 owners to consider a second purchase.

Pixeljunk is fast becoming a name synonymous with great PSN games. Pixeljunk Monsters and Pixeljunk Eden spearhead this impression, and the upcoming Pixeljunk Shooter looks equally as promising. So it’s a damn shame that Pixeljunk Monsters Deluxe looks set to be both the first and only Pixeljunk outing on the PSP. Do yourself, the PSP, and Q-Games a favour – buy this game.