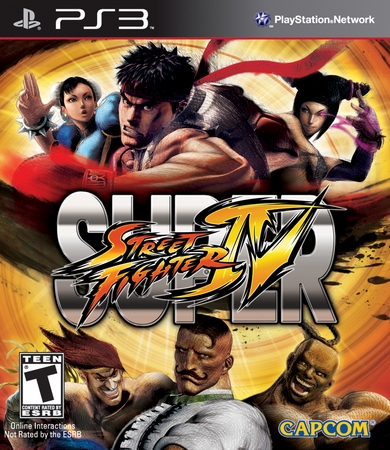 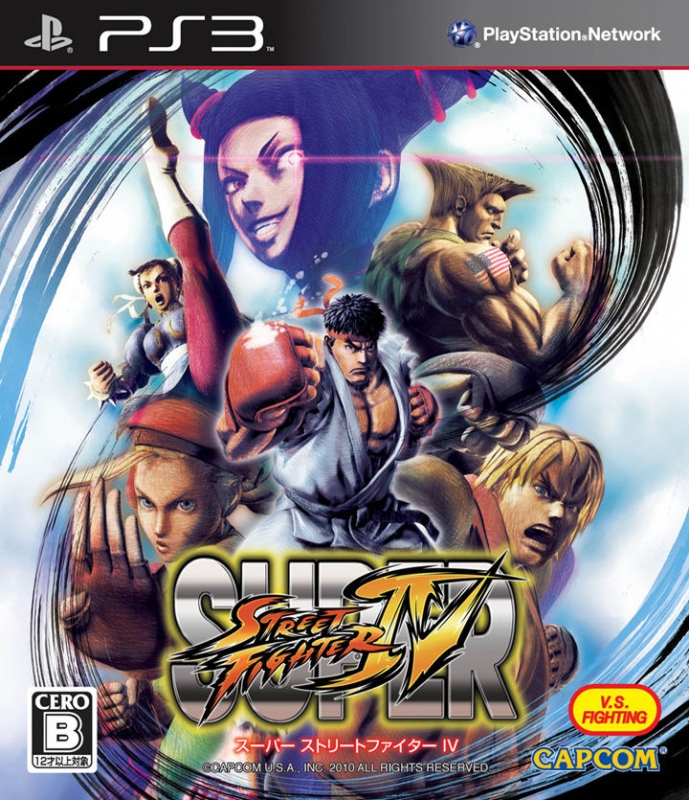 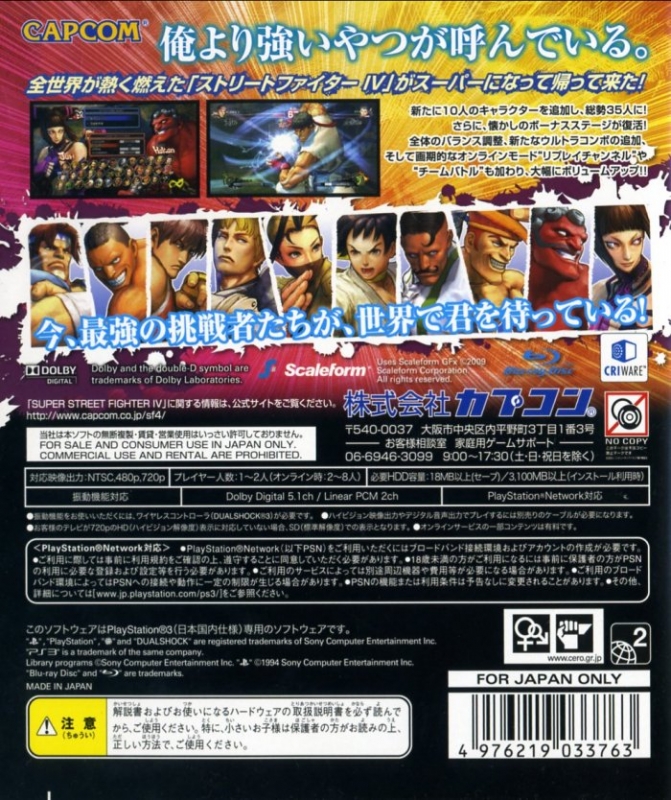 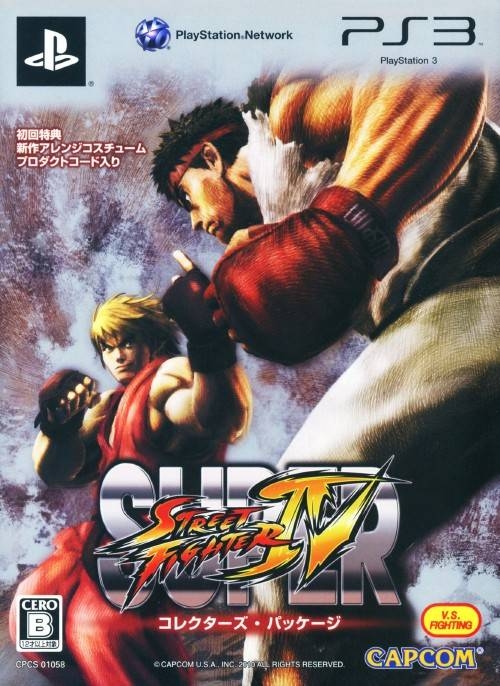 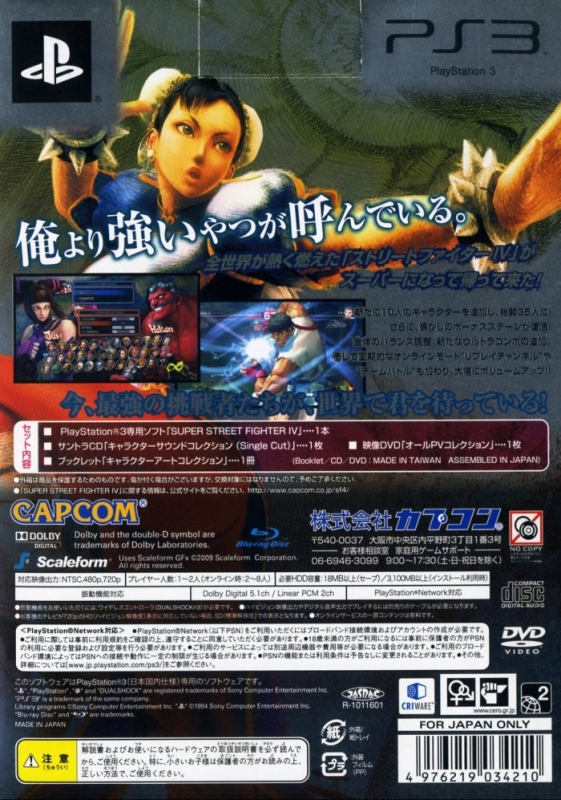 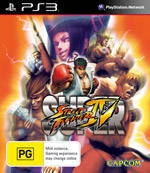 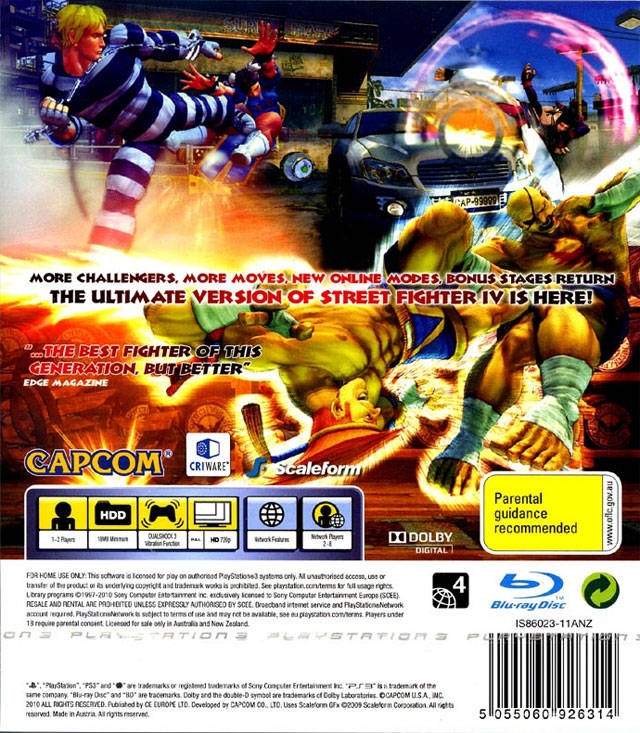 "Fighting is like business. Keep your eyes on the fight or lose it all" - C. Viper

I’m sure that you’re all aware that SSF IV, as a fighting game, works just like Street Fighter IV. It features all of the lush environments and characters we saw in SFIV, along with a handful of additional levels and, more importantly, adds another 10 unique fighters to its roster, most of which are from previous Street Fighter games. You can stick to your favorite fighters, but I’d be lying if I said you wouldn’t be enticed to try out the fighting styles of the new cast. They include classic fighters like T-Hawk and Adon, boxers Dudley and Deejay, Final Fight heroes Guy and Cody, and last but not least the female cast which includes Ibuki, Makato and Juri. The plot and the stories in arcade mode are re-hashed and are still pretty much pointless, but that doesn’t make the characters and their rivalries any less interesting.

Only regulars will notice that game is slightly more balanced, and other than that the fighting mechanics in SSF IV remain unchanged. You can read the detailed explanation of the fighting mechanics in our original review of Street Fighter IV. However, there is one obvious addition, which is that each individual fighter has an extra ultra attack. You choose between them during character selection just like you’d choose taunts, outfits and outfit colors. The new ultra combos are a change from the original. For example, if one is a close range attack, then the other one is most likely to be an aerial combo, or a combo that can reach the opponent from a distance. As a matter fact, aerial special attacks are a prominent feature of this game, especially with the new characters. Some ultras are designed to catch a character off guard in mid air or can be performed during a jump. Having two ultra combos isn’t really a thing of preference as much as it is a technique to throw friends and online opponents off guard. As mentioned in the original review, ultra attacks can literally change the direction of battle, so having a way to confuse your opponent by keeping them guessing which ultra you have is really useful.

Character designs and environments remain brilliant. New levels like the Skyscraper or Solar Eclipse add to the diversity of locations available. If watching the sky turn hazy purple during a full solar eclipse wasn't already a treat, you also have hippopotamuses emerging from a pond to dry themselves, along with a handful of furry and flying friends. One area, however, where the graphics haven't improved and remain one of my only disappointments in the game is the anime cut scenes during Arcade mode. The opening story for each character is a slide of a few images with a voice over from the character that sums up their reason for entering the tournament. It's a shame that the 10 second rivalry scenes during Arcade mode are more interesting than any of these cut scenes.

The opening theme song has been removed, which is unfortunate, but the rest of the music has been carried over from SF IV. New themes have been added for all of the new levels. Unlike in Street Fighter IV, however, each character now has their own theme music, which is played during opening story scenes and rivalry battles. I'm not the only person quite fond of the Skyscraper level purely because of its music; if you're not hosting an online game you will notice everyone almost always chooses that level. The same voice actors have returned for both the English and Japanese voices and new taunts have been added. In-game dialog is not exclusive to rivalry battles anymore, and finally the announcer is also less annoying.

Some familiar challenges from older Street Fighter games have returned to Arcade mode, like the barrel and car smashing challenges. They have replaced the Survival and Time Attack modes that you would find as the challenges in the previous Street Fighter. They're fun at first but become boring and annoying quickly. You can remove the feature so that these challenges won't interrupt you during arcade mode. Also in Arcade mode, the final battle with Seth has been redesigned. If you have Arcade mode set to two rounds then Seth is pretty weak at first, but after his first defeat he doesn't hold back and becomes a pretty tough opponent, even on medium difficulty. The level design and theme music have changed, which really makes the final battle something to look forward to even if you own the original Street Fighter IV.

The trials are the best of the challenges. Here you can learn specials, ultras and combos. Each chapter has a little over 20 trials. After each successful trial you are prompted to continue on to the next trial without a load screen, which makes the process of mastering moves a lot faster and less tedious. This actually promotes the use of different characters, and because of the additional ultra, characters can perform combos that weren’t available in Street Fighter IV, so you can learn these during trials as well.

Along with the ranked battles, two new ways of connecting with other players online have been introduced. First up is Endless Battle, which is basically an unranked match. You can keep it exclusive to one friend; however, up to 8 players can join a single session. The player who wins continues on and the losers wait their turn. It’s great when you can maintain a winning streak, but losing and wasting valuable time watching strangers fight each other is not at all interesting, which is why it's common for losers to exit the game. However, according to the host's set-up, random players can join during the session. The other online mode is Team Battle, which allows you to team up with other players online. Two teams containing up to four players can face off. Like the Endless Battle, the wait can get annoying because if a team mate wins then they continue to play until they are defeated, which means the first player can defeat a whole team while everyone else just watches. However, you can choose before the battle what fighting order you prefer. I only found this type of online battle to be fun when I would team up with my brother, so unless you’ve formed a decent online posse you won't be enthused to play Team Battle for very long.

A neat new feature online is that individual players can rank up according to points awarded after a match. Every player starts off on a D rank and can then work their way up. Along with Player Points (PP), which reflects an individual's skill, and Battle Points (BP), which reflect how much online experience a player has, you can pretty much determine how good your opponent is going to be at the VS screen right before battle.

There's no need to unlock characters in SSF IV, because all 35 of them are already available for you. Alternate costumes are available on the PSN or Xbox Live store in individual packages that go for $3.99. I would recommend players to wait until July 27th if they're interested in additional costumes though, since all 35 costumes will then be available for purchase in one package. Unlocking costume colors, taunts, online icons and titles depends on what characters you use, but they are less of a chore to unlock now because you're rewarded with them in pretty much any battle mode, be it Arcade or online.

Players can now view their progress at the title screen via the Player Data option. Stuff like number of wins, win ratio and the amount of perfects performed against online opponents can be looked up. You can look up those same stats per character as well, which is extremely important because it can show you where your weaknesses lie. For example, after 500 online battles, I’ve noticed my winning percentage against T-Hawk while using C. Viper is zero. One of my favorite features of the Player Data option is watching replays. There are multiple channels but the only one you’re going to want to view is your own battle log. Up to 30 online battles are automatically saved in the battle log. You can also go to it at anytime to permanently save your favorites. To answer the question asked in the introduction - yes, Super Street Fighter IV is still a great purchase, even if you already own the original Street Fighter IV. At a retail price of $39.99, that includes 10 new characters, an improved online match-up system, and fast-paced trials and replay channels which make the learning process for newcomers friendlier and more approachable, so if you haven’t already had the pleasure of enjoying Street Fighter IV, now is the time to pick it up. It is a superb package that proves that the fighting genre is still kicking and has a lot to offer.