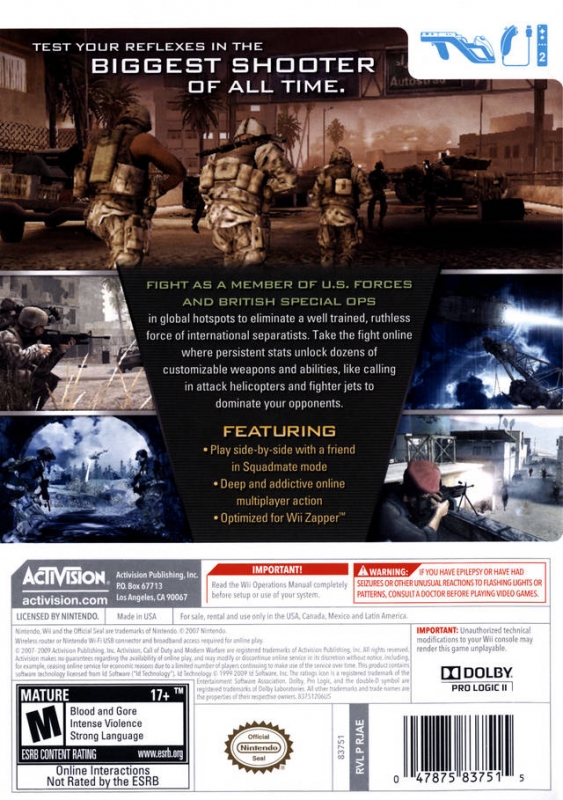 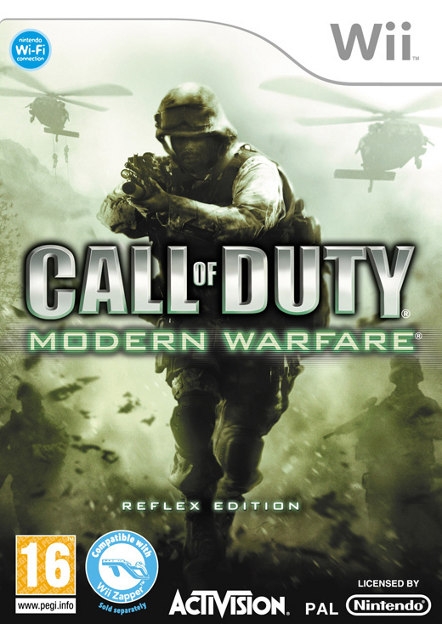 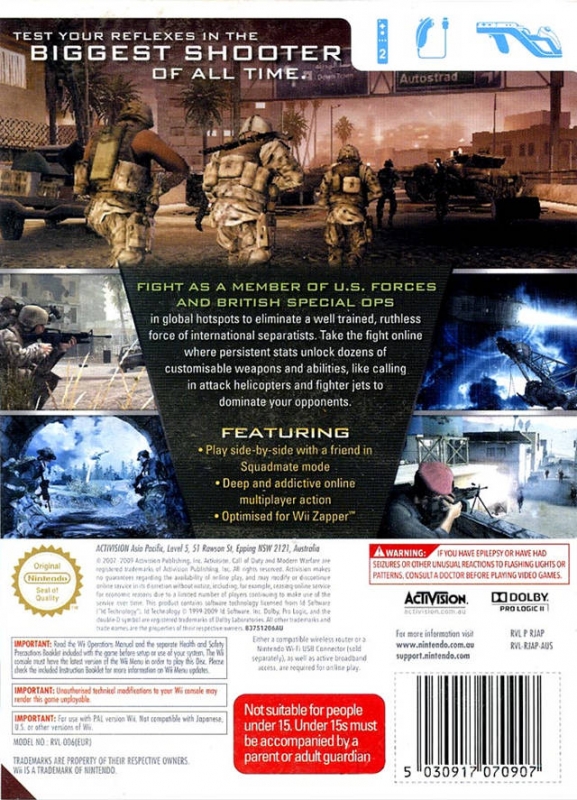 However Wii gamers missed out on all the action.  The system really lacked a serious FPS effort.  With such high demands, 2008 brought them Call of Duty World at War, lacking a lot of content, but a serious step up from Call of Duty 3 on Wii.  Mid 2009 brought The Conduit, a built-from-the-ground-up exclusive, meant to dazzle in visuals, show off the advantages of the Wii IR pointer, and have serious online content.  Now, Treyarch returns to port over Infinity Ward's masterpiece in its entirety, and without a doubt it’s the best shooter on Wii to date.

Some of the most impressive visuals in size and scale on Wii.

Modern Warfare is synonymous with big scale, awesome story, great presentation, and some of the best gameplay in a shooter.  With Reflex, things had to be toned down to work on the Wii hardware.  However, Treyarch did an excellent job of keeping everything that made Modern Warfare what it is - epic scale and all - and still able to make some really solid visuals on the Wii.  First off, they bring back the stunning explosion and smoke effects from World at War, added in a couple of extra details that were lacking in World at War like reflections on the water and scopes of the guns, and improved upon the amount of destructible items.

A couple of the visual problems in World at War were addressed this year, mainly being the textures, and a stabler framerate.  Reflex sports some of the best textures on any Wii first person shooter.  It’s not using bump mapping like the original Modern Warfare, but rather it has textures that are called “pre-baked” bump maps.  Essentially there to give the illusion of bump mapping, so while not as detailed and nice looking, it’s still pretty good and helps when the game has a massive amount of enemies on screen.  The only issue here I came across was when leaving from the first real mission (on the boat), the sea looked solid black, while it was clearly a dark blue when going in.  I'm not sure if it’s the texture itself or the lack of light on it, but it did stick out a bit.

The Quantum 3 Engine that High Voltage produced for The Conduit can actually produce better lighting and explosion effects than what can be found in Reflex, and do bump mapping.  However, the art held The Conduit back, while Treyarch did an amazing job with an engine that doesn’t produce quite as awesome effects, and makes Reflex the overall better looking game in motion.  But it still feels like better graphics achieved and that there is room to grow.

Not a single thing was taken out of this impressive port.

On the flip side, despite being quite possibly the largest scale in sheer map size and enemy count alone, the game still keeps a solid 30 frames.  The only real dips occur on the biggest areas with a lot of effects going off, the occasional texture that needs to load in, and the last level where a ton of destruction and carnage is going on.  Online it never dipped once for me - despite all the explosions and wreckage being blown up, it really seemed locked at 30.

The story presentation is just superb, probably some of the best voice acting, mixed with great surround sound effects to make you feel like there’s something going on all around you, and probably some of the most intense moments in any FPS.  The sound is also awesome - you’ve got some nice tunes mixed, though not played up enough to make you forget about listening for shots fired.

If you’ve played World at War on Wii, the gameplay is much the same, except this time you’ve got control options out the wazoo equal to that of The Conduit, and with more advanced weaponry (that’s why they call it 'modern' right?).  You can literally tweak everything from bounding box to turn speed (horizontal and vertical), there are just countless settings you can change, and basically just about everyone could find a setting that fits them.  The settings and options are very similar to the PC - it even brings the lean function in from the PC version that’s not on the other console games.  It’s a minor addition, since the lean is best for peeking around corners and not much else, but it’s still welcomed.

Modern Warfare has some of the most intense multiplayer on Wii.

In singleplayer, the game very much still has the few issues like grenade spam, and enemies are way too accurate with them.  Other than that the game has some of the best level design, with multiple routes through one single area, which help you flank the enemy rather than going for a head on assault that may result in many deaths.  The Wii remote can help immerse you in the game, with very accurate shooting and you feel like you have real control of the gun and have the trigger in your hands.  It gets you really into the game.  Everything feels like you’re a really badass soldier in a cinematic summer blockbuster, the action is intense, over the top, and comes often.  The story will take you a good 6 hours on Normal if you’re good, so while not the longest singleplayer, it’s very adequate.

Most of your time, however will be spent playing online, which is deep and addictive, much like it was in the original.  All the original content returns, only lacking the five DLC maps and voice chat.  For anyone that played World at War last year, they will tell you how it could be a laggy mess if the host had a bad connection, and if he dropped everyone dropped.  It wasn’t a game killer but was an annoyance.  This year they streamlined it, as it’s quick to find an opponent, its lightning fast to connect and join the game, and if the host leaves it just transfers to the next guy in line no problem.  I personally found no lag on my end in any of the games I played and only one opponent lag, but it seemed to be his connection and no one else’s.

As Price always says remember to check those corners!

Gameplay online is all there - kill streaks, perks, all the guns and upgrades, and the leveling system.  It’s really fun and all the little rewards make you wanna go back for more, get just one more headshot, or another hundred experience for that level so you can get that new gun.  Then, when you reach fifty-five, you can drop down to do it all again!  They also made a few changes in the multiplayer aspect when porting this game over.  It allows only ten players online, six less than the other console versions.  They also took out splitscreen but added in Squadmate Mode for a bit of coop play in singleplayer.  It’s nowhere near an equal trade off but at least there is something for your friend to do instead of watching you shoot some terrorists.  One of the big issues is that it's two years old and it's releasing at 50 dollars, though it's the same price now as a new copy of the PS3 or 360 games, it should at least have ten dollars knocked off.

Two years after its initial release, Call of Duty 4 is still an exceptional game, but now it’s an exceptional game on a system in dire need of exceptional shooters.  While the game is enhanced with the Wii controls, you can find the same content on PS3 and 360 for the same price and you get splitscreen, 5 DLC maps, and sixteen players online, so this isn’t going to be quite the definitive version.  Its main appeal is to those that lack a PS3 and 360, or those that love the Wii FPS controls (like myself that have owned the games on both 360 and PC but love the IR controls).  If you fall into one of the latter categories, Call of Duty: Modern Warfare Reflex is simply a must buy if you like shooters.