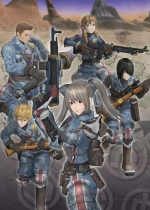 Since this is a review of a downloadable episode (hereafter referred to as DLC), I am going to quickly define exactly what each score pertains to. Presentation will be mostly dependent on story, voice acting, and use of already established visual presentation. Gameplay is dependent on the amount of strategy used in the missions provided. Value is based on the episode’s average playtime, price of the DLC, and variety of gameplay in the episode.

It has been a while since I have been able to step back into Gallia, so when the latest and perhaps final piece of DLC came out for Valkyria Chronicles, I donned my Squad 7 t-shirt (yes I have one, ask Outlawauron) and got to work. Whereas the previous DLCs for Valkyria that I reviewed were story based episodes, Challenge of the Edy Detachment consists of a set of skirmishes that are themed around the 5 classes of soldier and a special tank-based skirmish that brings all the classes together.

Each mission is designed to force you into using the unique qualities of each class. The Lancer mission is a fight against ten or so tanks with the goal of killing everyone in sight and is quite a challenge since you have to defeat not just tanks but also a number of troops that keep being reinforced each turn. Marina tasks you with killing a large number of troops that can be seen from one of two crow’s nests, with the special requirement that none of the enemies can reach their home base alive. This is a great mission because it not only allows you to do a lot of sniping, which was one of the more satisfying classes in the full game for me, but also forces you to pick targets wisely so that you don’t allow a scout to bolt into the base. You also have to be sure not to leave yourself open to attacks from other snipers at the end of each turn. Scouts have the most disappointing mission. You're given a single scout and have to run around a map trying to find all of the hiding enemies and kill them. Initially it seemed interesting, but soon gets tiresome when you have to run around the entire map looking for that one final sneaky enemy.

The shocktrooper mission objective is to defend a line against an impending horde. It not only highlighted the use of shocktroopers as a defensive unit but also forces you to attack and not just hunker down and wait for people to show up. Surprisingly, engineers get their own mission as well, and it isn’t all that bad. The tracks on the Eidelweiss tank are out and it is under siege on all sides by lancers and surrounded by mines. You have to take in a group with at least one engineer to fix your tank and lead it to safety through the minefield. Capping all these levels off is a skirmish that brings all of the classes and the tank together and forces you to use each of their abilities in order to get the tank to its destination.

I really enjoyed getting stuck into some new Valkyria Chronicles challenges, and I was surprised by how much strategy I had to use even though my characters were at max level with all of the upgrades they could get. Considering that I only disliked one of the six missions I would say that this DLC is a resounding success, at least as far as gameplay goes.

Presentation is probably the biggest disappointment in this DLC. Yes the game is still as beautiful as when you first played it, but Challenge of the Edy Detachment doesn't bring anything new to the table. Each mission is described by a member of the Edy Detachment, and there are some great jokes that reminded me why I fell in love with some of these side characters in the first place. Homer, Jann and Marina will always be some of my favorite characters, but I was disappointed in the lack of English voice-overs for the descriptions. It was great to read Homer’s love of punishment, but it would have been even better to have heard it. The Japanese voice-overs are there if you want something to fill the dead silence, but then you won’t get the voice-overs in English during the battle, so it’s a trade off. Like past DLC, all of the skirmishes take place on maps from the main game, but most put you in new starting positions that make the maps feel slightly different.

For a mere $5 you can have all 6 skirmishes, which took me about two and a half hours to play through (but that was just the first attempt. If you want to get an A rank in all of them it will take you a few more hours of work). It isn’t quite as long, and doesn't have as much replay value as Behind her Blue Flame, but it does have greater mission variety and you get a cool anti-tank sniper rifle for completing it.

All in all, Challenge of the Edy Detachment is roughly as great as Behind her Blue Flame, but for different reasons. The strategy required in each mission is a lot of fun and takes you back to how amazing the main game is, and it's a further reminder that the missions in Valkyria Chronicles have a surprising amount of variety. But the presentation is lackluster and the overall playtime makes it slightly shorter than Behind her Blue Flame. I had hoped that the final piece of Valkyria Chronicles DLC would undoubtedly be the best, but I suppose being tied for that honor is just as good. If you're a fan of the game go pick this up and revel in the best PS3 RPG just one more time.

note: all pictures are from the main game because I could not find any pictures from this specific DLC.