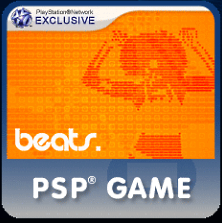 The only game that allows you to play along to your favorite songs stored on your PSP.

When Sony first launched the Playstation Store for the PSP they needed to produce titles that would prove that the portable could provide small scale and fun games for a low price. From that objective came Beats, a game that combines the two most used features on the PSP, gaming and music. For the low cost of five dollars, Beats morphs the music library stored on your memory stick into a traditional rhythm game.

Gameplay is straightforward, pick a track and play along to the stream of button commands the game generates. There are three orbs in the middle of the screen, one on the left, the other on the right, and one in the center. To highlight the orbs you must press the corresponding directional button and then the button commands in tandem to hit the notes. The more notes you hit the more points you score. Your score also depends on just how close you come to hitting the note on time. The four face buttons serve as the symbols for notes and are brightly colored in order be distinguishable from one another.

For the most part the button generating works well but is better suited to certain types of music than others. Rhythm heavy genres such as techno, hip hop, and rock generate the most interesting and fun to play button sequences. More melodic music doesn’t fare quite as well, though that really isn’t the game’s fault. For the sake of this review I sampled a wide array of music types and found that the game synced acutely with selections for the most part, but playing along to a smooth jazz song obviously pales in comparison to playing along to a heavy metal anthem. One problem I did find with the synchronization is what musical aspects the game deems note-worthy varies sporadically. Some songs that features interludes of silence will have buttons to play along to while others with similar moments of rest won’t. There are also more than a few instances where the syncing is off between what you hear and what action takes place on screen for certain spans of play, which can throw you off beat totally.

Beats takes its music straight from your memory stick with a loading time under ten seconds. From then on the music streams with nary an audio or visual hitch. The quality of your mp3 file matters though as the game won’t be compatible with corrupt files and will either tell you after you select it or halfway through the song if it somehow manages to load. The sound quality is just as good as when the PSP is solely playing music. Playing with headphones isn’t necessary but certainly helps you play more in tune with the music. The game comes pre-equipped with 12 songs of its own to play along to lifted from other Sony titles such as Eyetoy Kinetic, or made for Beats specifically. These songs are all of the Dance/ Electronica variety and play along surprisingly well with the game.

There are four difficulty levels that all songs can be played on. Depending on which difficulty you choose the more complex a button command sequence will generate. There is a tutorial that helps you grasp the basics and from there it feels natural to ascend to the higher difficulties. Achieving the highest score possible is the obvious objective for playing each song and is accomplished by missing as few notes as possible. As your combo chain grows, so too does your multiplier which ultimately dictates how high your score will be. Missing one note cuts your multiplier in half and another depletes it entirely. For obsessive players this may lead to constantly restarting a song to make sure you hit every single note. On the opposite side of your multiplier bar is a gauge that fills up whenever a special, glittery, note is hit. When the gauge fills completely you can activate it by pressing the L button which sets off a special series of notes that are worth twice as many points but come in from multiple angles rather than a straight line.

Playing along to your favorite songs can be extremely fun even if the gameplay never shakes things up dramatically. I found that the better I knew a song in my head, the better I could play along to it in game. The first hour of the game is identical to all that follow but it’s still an enjoyable way to interact with your music. There is more to Beats than simply playing along to a set-list though. The Jamming mode allows you to musically modify licensed tracks like “Call Me Baby” by Senses (I never heard of them either). This simple and comprehensive feature allows you to layer a base track with an entire suite of vocal, percussion, instrumental, or effects samples. You can even record and save these jams to play along with like the rest of the game. It’s an enjoyable diversion, but sadly is not compatible with any of the songs in your library.

Surprisingly, Beats boasts a few online multiplayer options, but all are underwhelming. You can hop online and share your recordings with other gamers or download a few for yourself but there is no point in doing so as no one is ever online. This also nullifies the need to try out the co-op mixing which isn’t fun to begin with because there is no way to communicate with whoever you are playing with.

Beats obviously wasn’t made to be a visual powerhouse, but what’s here is eye pleasing. There are 8 themes and over 60 visualizers to choose from. Everything is a dynamic splendor of color and motion, looking good enough to keep your eyes glued to the stream of symbols.

For only the cost of five dollars, Beats offers a unique way to experience music on your PSP. The amount of value it has to offer depends on just how much music is stored on your memory stick, which in itself depends on the size of said memory stick. Beats doesn’t offer anything we haven’t seen before or anything overwhelmingly brilliant to make this worthwhile to anyone outside of its intended audience. But anyone who uses their PSP to listen to music regularly should check it out because it is a fun, if flawed, toy to tinker with from time to time.