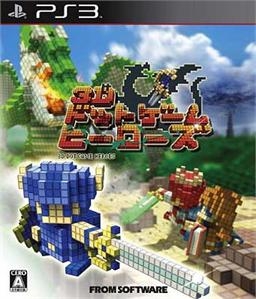 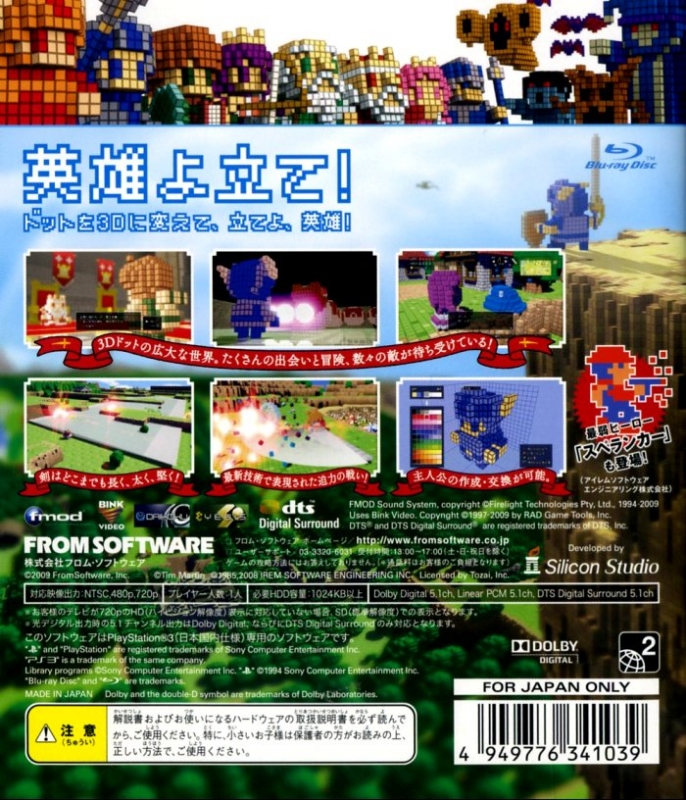 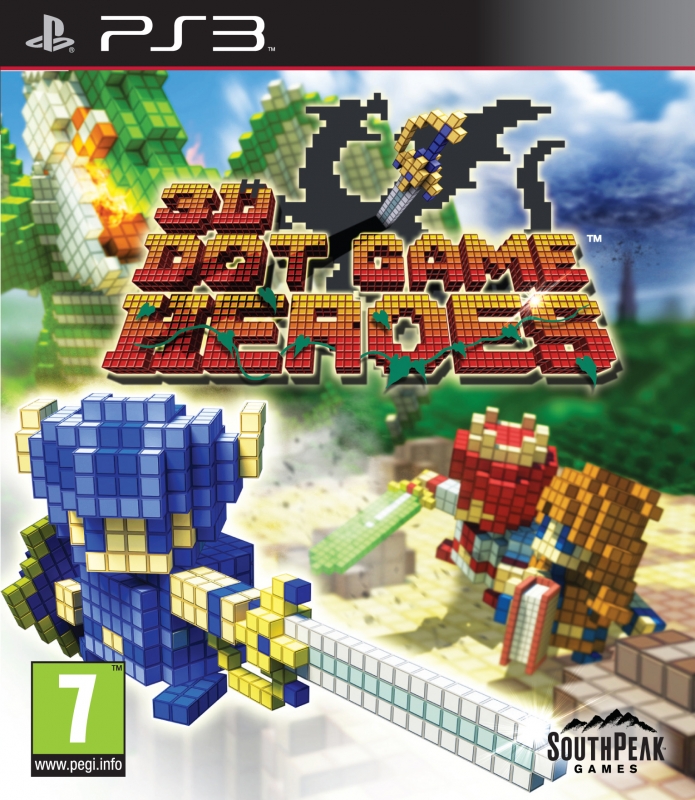 Retro is the new modern.

Modern gaming be damned; classic is making a comeback. From classic PC adventures, to old Mega Man games, the 80s and 90s are alive again. 3D Dot Game Heroes is a triumphant tribute to a few such classic games, primarily 8-Bit Zelda and Dragon Quest, but it’s doing much more than riding on nostalgia.

3D Dot Game Heroes takes place in the land of Dotnia, a formerly 2D world of mystical monsters and powerful magic. Dotnia is under threat by a dark force, and it’s up to the Hero to gather an ancient sword and the magical orbs of the eight sages to defeat the evil dark lord forever, freeing the kingdom. Along the way you’ll meet a plethora of interesting characters, whose tongue-in-cheek style is more akin to Earthbound than other, more somber, game characters. These humorous encounters often offer sidequests, ranging from simple deliveries to tours of the entire world, and reward you with new swords and items.

Most of 3D Dot Game Heroes is spent exploring the grid-based overworld or dungeon crawling. The overworld is quite large, and features a variety of pixel-like representations of swamps, deserts, forests, and fiery volcanoes. New sidequests, characters, and items are scattered throughout the world, as well as the occasional rare monster. The game offers plenty of incentive to explore, but to do so you’ll need to acquire some items from the dungeons. Dungeons in 3D Dot are very much like those found in the original Legend of Zelda. The map is divided into rectangular rooms and multiple floors. Advancing in the dungeon often requires a new item, located within the dungeon itself. That said, the dungeons are generally pretty light on puzzles, and 3D Dot has more of a focus on combat than the more modern Zelda entries. When you clear a room in a dungeon, the enemies will stay dead for a period of time or until you leave the floor. Just before the boss fight every dungeon has a teleport to take you back to the entrance, allowing you to get back to the boss with ease if you die or restart. Most dungeons are an hour or so in length, but the last dungeon will take almost three to clear, and has as many teleports to compensate.

The combat is a bit hit and miss in 3D Dot. As long as your character has full health, his sword is powerful and features a variety of customizable abilities, depending on what weapon you’re using and how you chose to upgrade it. There are a variety of ways to upgrade your weapon, including length, width, beam, spin, and pierce; the last two being almost essential throughout much of the game. A fully upgraded sword can spin and clear almost an entire room, cutting enemies even behind walls and barriers. When damaged, even slightly, your sword becomes weakened and small, and loses any upgrades you’ve purchased for it until you’ve recovered health. This is an interesting and unique system, but it often leads to health farming when you take any damage in a dungeon, as many rooms are nearly impossible to clear without a fully upgraded sword. However, it’s incredibly satisfying to clear an entire room with a few swipes of the enormous, fully upgraded weapon.

In addition to your sword, a variety of spells and items are present. The spells are, entertainingly, named for the 3D graphical effects they represent (for example, Normal Map deforms the terrain around your character, damaging nearby enemies). The spells are only useful in rare situations, with the exception of the magic reflect spell, which is necessary to kill certain enemies. The items, similarly, are not often helpful in defeating enemies. They are, however, useful in exploring and opening new paths in both the world and dungeons. As expected of the Zelda games it mimics, 3D Dot dungeons culminate in large, impressive boss fights. Most of these are fairly easy as long as you have full health and a good sword, but a few are particularly challenging. The final boss, in particular, is a pain, as he’s nearly impossible to beat without full health, and is a lengthy two-part fight. Because of this, it’s almost better to go ahead and restart the fight if you take a hit. You’ll also find the bosses much more difficult if you didn’t explore much, and failed to acquire shield upgrades and more powerful swords. Life and magic upgrades are less important, but still helpful throughout the game. 3D Dot definitely rewards those who take the time to explore the world and complete sidequests.

Speaking of sidequests, 3D Dot Game Heroes offers three minigames. These are Dash Circuit, Block Defense, and Blockout. Dash Circuit is a race in which you must complete laps around complex courses while dashing in good time. Because of how quick the dash is, getting a good time on Dash Circuit is incredibly difficult, especially in the later, more challenging courses. Block Defense is, as you might suspect, a Tower Defense game. You run around the map, playing as your hero, and build towers and attack enemies in order to earn money to further build and upgrade. This is a bit more manageable than Dash Circuit, but still very difficult, even for tower defense veterans. The final game is Blockout, which is a brick breaker. You play as your hero again, moving in a horizontal plane on the bottom of the map knocking a ball into the bricks with your shield or sword. This as well is very difficult, and getting a perfect clear for the good sword reward is no easy task. All of the minigames are enjoyable, but not for the impatient. Practice will be required to master any of them.

3D Dot, for all its retro style, is actually a pretty nice looking game. Characters are fun and detailed, and designing your own hero is a blast. The game does utilize various well-known 3D effects in mix with its cubed pixel style, and it yields a bright, vibrant, and playful world that’s simply fun to explore. On occasion the graphical style does get in the way of gameplay. Arrow traps can be extremely hard to see on the north wall of dungeons when overlapped by the HUD, and as mentioned earlier, taking any damage is a major hit to your character. Audio is a nostalgic mix of 8-bit sound-effects you’d expect to hear from a classic game and some slightly more modern, but still appropriately classic-like music. The main issue is that the music does repeat pretty often, and there isn’t an enormous variety of it. The songs themselves are good, however, and many could have been pulled straight from a classic Zelda adventure. Obviously there is no voice acting, and in general the audio compliments the visual design very well.

3D Dot Game Heroes isn’t the longest adventure you’ll ever play. Even with a good deal of experimentation, questing, and exploration, I completed the game in about 20 hours. Of course, I was nowhere near a perfect completion, and those who wish to do so can expect more like 25-30, depending on how much time they spend upgrading their weapons and exploring. After completing the game you may also re-enter the world and continue your save file. The minigames add quite a bit of challenge and value, and you’ll have to be adept at them to beat them and earn your perfect clear. Adding to all this, the game retails for only $40 brand new, and it’s a steal at that price.

3D Dot is an extremely satisfying parody of, and tribute to, the classic 8-bit adventure. The combat system could still use some tweaking, and it really would have been great to have a level editor (fingers crossed for it in a sequel), but the game is fun to play from beginning to end. It’s hard to create a modern parody of a retro game and still maintain a unique identity, but 3D Dot Game Heroes succeeds, and is a shining beacon of what great fun a retro callback can be.