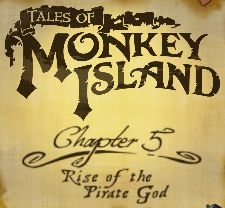 Tales of Monkey Island Chapter 5: Rise of the Pirate God

Is that a dog in your pocket, or are you just happy to see me?

Please note that this review assumes players have played all of the previous entries in the series, and key plot elements from previous games are discussed.

In a series full of oddball situations, Tales of Monkey Island Chapter 5 stands above the rest when it comes to ridiculous premises. Sure, Guybrush has awoken to find himself a prisoner on his own ship and been marooned on an island due to a Root Beer experiment gone wrong before, but this is a new one for him. Remember the surprise ending of the last episode, where LeChuck impales Guybrush with his sword, seemingly killing him? Well, it turns out that there are no surprises, and he's actually dead. The opening segment of the game actually has you helping his soul dig itself out of his grave in the Underworld. From here, it's up to Guybrush to find a way to A) return to his body and B) stop LeChuck for good. Along the way, he'll visit plenty of old friends (mostly dead ones) and interact with lots of funny new characters.

This ain't your daddy's Monkey Island.

Now, this being the end of a long series, you wouldn't expect much variation in gameplay from the previous entries. With that in mind, it's the characters that Guybrush interacts with and the puzzles that make things more interesting. Take, for instance, the master thief that Guybrush needs to steal certain items from. Sure, you can pick up and take anything from his shack, but the sly dog will steal it back from you without even being seen! There's also a genius take on the series' trademark 'insult sword fighting'. In this scenario, Guybrush is fighting two assailants at once, and in order to win he must retort to their comments with a one-liner that simultaneously insults one of them and cheers the other up. The final sequence aboard LeChuck's ship will give any hardened series fan a run for their money.

The other piece of the Monkey Island pie, the comedy, is present and in top form. As Guybrush wields his cutlass for the first time, he remarks "The way I wave this sword around, it's like I'm a little boy!" Another character also recognizes at one point that they are a "...worthless, backstabbing traitor with poor communication skills." Being the climax of the series, this episode also has it where it counts when it comes to drama. As Guybrush is moseying around underground collecting doodads, LeChuck is busy laying a fiery siege to the seas, and only the Cutlass of Kafloo can stop him. There is plenty of intrigue, as Guybrush questions the loyalty of characters who he thought were his friends, and plot twists run wild. Gamers who've adventured through every episode will find themselves well satisfied with the resolution on offer here, despite the promise that the saga is definitely not over.

Somehow, this little guy fits in your pocket...

The thing that stands out the most, visually, is the large variety of locations. From the Underworld, to the pub on Flotsam Island, to LeChuck's ship, no two areas look much alike, adding some nice variety to the series. Other than that, there's not much to say about the clean and barebones graphics that hasn't been said about the others in the series. The voice acting is superb, particularly from the Voodoo Lady, who plays a very prominent role in this episode. Also, you've got to love that Pyrite Parrot... even in death he haunts you and brings a smile to your face at the same time.

For everything that Rise of the Pirate God does right, unfortunately it misses a beat in one key area: length. It only took me four and a half hours to complete the game, a letdown considering the roughly six hours for the previous chapter. The jokes are always funny, so you might find yourself coming back to this again in a year, but a little more meat would have been much appreciated.

At the end of the day, the question is: should series fans buy this last chapter in the Tales of Monkey Island series? If they've stuck with it this far, then the answer is already obvious. While it's quite a bit shorter than the last couple of entries, the puzzles are still well-done and the dialog will have you laughing and crying at the appropriate moments. While it doesn't do anything new, the game will definitely be remembered as a very solid end to one of the most entertaining serial-based efforts in gaming.