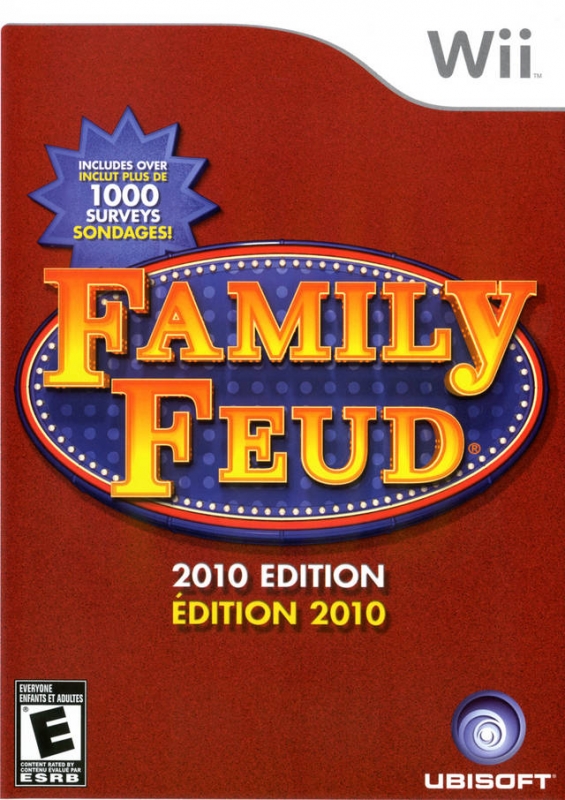 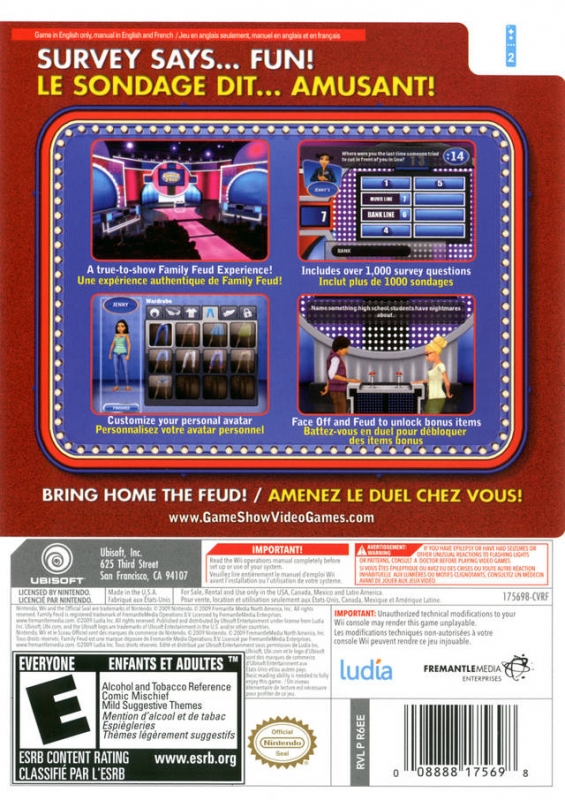 Note: A bit of this review was copied from my Price is Right review, as a few of the assets were exactly the same in both games.

At the same time that I received The Price is Right 2010, I also received another game show based game, Family Feud 2010. The first thing that immediately struck me when playing the game is that although it shares some assets with the Price is Right, like the avatar system, it does it better and is infinitely more fun to play.

When you first begin, you choose between 16 avatars, all of which look like models for Abercrombie & Fitch. You can customize that avatar's name, clothing and personality via a few mood themes. At first the building blocks for your character are limited, but more can be unlocked. The avatars seem far too limited though and they all pretty much look the same no matter how many “zany” accessories you toss on them. You then have a choice between two modes: “party” and “single player”.

Single player works kind of like a conquest mode of sorts, as you are shown a grid containing the names of a number of rival families. You can only access one family to feud with at a time, and if beaten, you move on to the next level. As you complete levels you are awarded various items to decorate your avatars with, such as sunglasses and hats, but nothing really impressive. The play progression is based around how the game is played on the television show almost exactly. When you begin you are in a “showdown”, which is a head to head confrontation to see who gets to begin the game. The announcer reads the question based on a survey of 100 people and you have to come up with the best answer.

To ring the “buzzer” in these showdowns, all you have to do is swing the Wiimote downwards. If you get the number one answer or get a better answer than the other family, you have a chance to either pass or play the round. At anytime, if you fail to say something that is on the list three times you get a strike, and the other family can steal the points. Pretty simple, right? The multiplayer in this game is exactly the same as single player, except the CPU character is swapped out with a friend.

The best aspect of the game is the predictive text feature found within. Since you have mere seconds to respond to the questions, typing a huge amount of text could be stressful, so the developers added a system where a list of word appears after you type the first three letters of your answer. This also aids you a little bit because if you are going out on a limb with an answer and it does not appear in the predictive text, it's probably not right.

The only questionable gameplay aspect that I found in the game was the shoddy A.I. Let’s say that I had a question where the number one answer was “doctor”, and I got three strikes soon after. Upon gaining the chance to steal, on most occasions the CPU character would also say “doctor” which, despite being a great answer, was already said. This is if they say something remotely close to what the question pertains. I had one game where the question was about bed types and a CPU character blurted out “African!” Unless I’m dense I’ve never heard of an “African bed”. Due to this stupidity on the computer's part, I actually never lost a round of the game, sweeping every single family.

The graphics in Family Feud 2010 aren’t amazing but they do the best job they can. Although using similar assets as The Price is Right 2010, Family Feud does not shoehorn a bunch of live action clips into the game, meaning that it looks better and runs more smoothly, and doesn’t load all the time. The music, however, follows in the same footsteps as all of these game show games, repeating the theme song infinitely. In future games I wish they could at least put in some boring elevator music as hearing the show’s theme song that often is not pleasant.

Value is hard to assess in this game. It does a great job of looking exactly like the show, but fails to really pull you in due to a lack of features. Since all you can “win” are more levels and accessories for your avatar, there is not really any sense of accomplishment and challenge found within. Another problem is that the game lacks any appearance from the show's current host, John O'Hurley, which is a real shame. In all honesty this game will only appeal to those who are die-hard fans of the show or simply looking to rent.

All in all I actually had fun with Family Feud 2010, which is good, because I’m not sure I could take another The Price is Right 2010. The game looks and plays exactly like the game show on TV, and will keep you entertained during the short time you play it before it gets old. Despite some questionable A.I., this game looks and plays well, but I really feel like it needs to be in the value bin rather than a full priced game. If you love Family Feud at least give this game a rent.