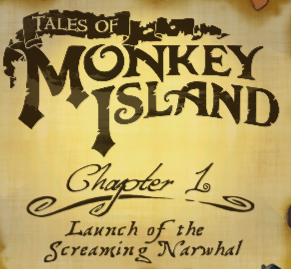 Review: Tales of Monkey Island: Launch of the Screaming Narwhal

"It's good to see your repeated deaths and dismemberments haven't dampened your enthusiasm!" -Guybrush Threepwood to archenemy LeChuck

The Monkey Island series of point-and-click adventures has long been one of the most well-written comedy-based efforts in gaming. After a long hiatus, TellTale Games first of five chapters in the Tales of Monkey Island series proves that the series can still stick to its roots while keeping the jokes and gags relevant to the current times.

In true game-villain form, the evil demon pirate LeChuck (or is he a zombie this time  a mummy? He isnt sure himself) has once again risen from the dead to kidnap Elaine, the wife of series hero Guybrush Threepwood (self-proclaimed Mighty Pirate!), and make her his own, while simultaneously trying to harness the power of mystical monkeys to do... something. Exactly what that is remains a mystery, because due to Guybrushs trademark idiocy as he attempts to board the villains ship, he instead finds himself washed up on the shores of Flotsam Island. Here, he must perform several piratey deeds (including commandeering the titular pirate ship, the Screaming Narwhal) in order to impress a local reporter into helping him get off the island and back to his love. The matters are complicated somewhat by the fact that his left hand has taken on a life of its own and would prefer if he didnt succeed (anyone who's seen the movie Idle Hand would have the right idea). Whats worse, theres a new antagonist thats a great stand-in for LeChuck. The end of this chapter very much feels like an episode in a TV serial, as hes definitely made progress in his quest, but it ends on an unexpected cliffhanger that really makes you want to see the next episode.

As far as gameplay goes, the game doesnt take many liberties, instead choosing to add to and refine the control system of the typical point-and-click adventure. This means that it mainly revolves around talking to people, picking up random objects and seeing how they interact with other random objects. Without spoiling much, all Im going to say here is bomb and frilly pink underwear. Guybrush can be controlled with either the keyboard or the mouse, though I found myself using a combination of both, running around with the arrow keys and clicking on objects, people, and my inventory with the mouse. The ability to move the character around manually (as opposed to simply clicking where he should go) has allowed the developer to do more with 3D space - specifically where puzzles are concerned.

The puzzles in the game are well-thought-out, and while theyre purposely ridiculous, only two near the end really stumped me for longer than they should have. If youre having trouble, the answer is either so ridiculously simple that you instinctively dont even think of it, or youve missed some object along the way that has an obvious application. Newcomers to this genre of game can turn on a hint system, which has the camera sway over near an important object or a character mention a subtle hint that would naturally fit in as game dialogue. From the comedic standpoint, the game made me genuinely laugh more than any game since Mario and Luigi: Superstar Saga on the Game Boy Advance. Keeping the jokes current, youll be guiding Guybrush as he acquires U tubes, lets you know that he hates scrubbing tar off of his main mast, and meets Doro the Explorer.

The visuals of the game are well-done, with characters designed to look like highly-animated cartoon characters, while the backgrounds are almost like watercolor paintings. The game looks good no matter what graphical setting you have it on. It should be noted that the game does not have a 'recommended graphics settings' feature (or if it does, it doesn't do its job very well). The computer I reviewed the game on fell somewhere between the minimum and recommended settings, and yet the graphics level defaulted to a 9 out of 10. I had to play around with it for a while before I found the setting that gave a framerate I could actually use.

The sound very much evokes the Caribbean feel the game is going for. The wind in the background and the utterances by various pirates as youre wandering around keep the light, tongue-in-cheek feel intact. Be warned: you will get tired of certain monkey, bee, pig, and wind sound effects during one very long sound-based puzzle that you must do twice. The same voice actors from the previous games reprise their roles as Threepwood and most other returning characters, and they havent lost the touch. Unfortunately, the same cant be said for LeChuck, and while the new voice sounds competent and menacing, its not as energetic and evil as his predecessor. To compare the new LeChuck voice to the old one is almost to compare Snidely Whiplash's voice to Megatron's - the former is adequate and easily says 'I'm the villain', but the latter is legendary.

You'll have to knock Winslow down if you want to commandeer the Screaming Narwhal.

The game is an average length for the $8 youll pay for this chapter on its own (and all five episodes can be purchased as a package for $35, saving you $5). Genre veterans will likely take three to four hours to complete it, while relative newbies to Adventure gaming (like me!) will take around five to six hours to solve all the puzzles. Its the type of game that begs to be replayed at least once for a faster time, too. Also, the jokes arent the type that would get old quickly.

All in all, TellTale has taken a much-loved franchise and chopped it up into bite-sized pieces. Personally, if this is the pedigree to which the new series will be held to, I can't wait for the next installment. Fans of adventure games and high-seas hijinks should look into Tales of Monkey Island: Launch of the Screaming Narwhal.