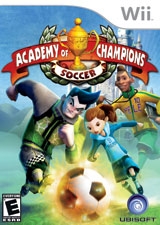 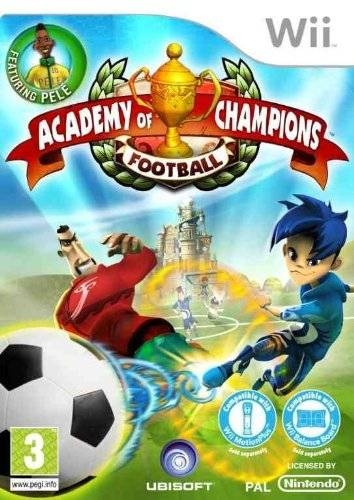 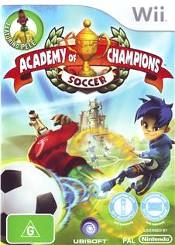 Ubisoft’s Academy of Champions: Soccer ambitiously attempts to tie together three core gameplay premises by creating a family-friendly and a very much over-the-top arcade soccer experience, inserting this into a solid single player adventure, and housing the single player adventure in a Harry Potter meets soccer mash-up. And at first glance, you may be thinking, it’s really not a bad concept; what young soccer fan would decline an invitation to a soccer-themed academy where you attempt to reach pro status with the guidance of Pele and Mia Hamm, two of the sport’s biggest gurus? Not one, unless they were they were sent to the Academy of Champions. Mediocre gameplay mechanics, a repetitive single player mode, and a largely uninteresting cast of characters prevent the title from being anything more than just a promising concept in theory.

You begin the single player mode with the option of selecting either a male or female character, which will in turn influence whether your primary coach will be either Mia Hamm or Pele. After you have chosen your gender and name, you are then presented with a short cutscene that shows what appears to be an evil man sending you a fake invitation to the Academy of Champions. Your main character then ignorantly accepts the forged invite and makes their way on over to the Academy of Champions where they are still given the opportunity to join the school, forged letter or not. Once a member, you are assigned to the Mighty Five, one of the school’s many soccer teams, and your goal of turning pro and hopefully determining the origins of this forged letter by school year’s end is under way. The game doesn’t really ever take its light-hearted and fundamental story too seriously, and considering the title in question, that’s perfectly alright. The manner in which it all unfolds, however, leaves much to ask for.

To no surprise, competing against and ultimately beating rival soccer teams will progress the story, but getting to these matches is the hard, or should I say, monotonous, part of the game. Single Player is presented in a schedule-based motif that displays a set list of 20 days, each of which possess their own daily schedules and routines. If you’ve played any of the recent Madden titles, think of the schedule as you would the calendar in Superstar Mode in Madden, with all of your minigame practices, games, and so on conveniently available and as easily accessible as possible. But instead of giving you the option of simulating some of the daily events like in Madden, Academy of Champions forces players to complete every daily task before allowing players to move on. It’s an unnecessary and all too restrictive way of completing things. I can’t help but wonder why Ubisoft didn’t opt out for a much more free-roaming approach to gameplay, one that would allow you to explore the large academy, interact more with characters and the environment, and open up the option of finding and completing your own objectives rather than being stuck to the confines of drab 20 day schedule.

If being presented with a bevy of daily tasks to complete doesn’t faze you, then the tasks themselves likely will. Many of the same basic soccer minigames are rinsed and repeated more than their fair share of times (most days consists of at least two minigames), which again points to a more open-ended method of play being the better alternative. There are four different school “terms” in the title’s single player, and once you’ve hit that fourth term where the only minor change to the minigames is increased difficulty, you may be internally questioning if pro status is really worth the demands.

By this point, you’re likely wondering if there’s anything to look forward to in single player. Let me assure you that not all is lost in the large tsunami of repetitive minigames, with the recruiting and customizing player abilities leading the way on non-game days. As with the minigames, both can only be done when they appear on the daily schedule, but each offers a respectable amount of depth and really gives you something to look forward to sans the actual games themselves. What really shines on the recruiting side of things is that there is no limit to the amount of players that can be recruited – if you’re content with the five default players already given or if you want to attempt to bribe every last available recruit you can, it’s essentially all up to you. However, recruited players are rather two-dimensional and sorely missing anything more than a common personality theme. Although you may run the risk of making the game a smidge more complicated narrative wise, it would have been nice to know a bit more about these characters that join your team.

Easily the most rewarding aspect of single player are the RPG-like experience points that can be achieved after the completion of games, minigames, or sometimes even reading a bit of dialogue. These EXP points (as they’re called) open the doors to purchasable talent upgrades, allowing you to upgrade such skills as striking and speed. Objective completion will also earn you tokens, which can be spent at the academy shop (when the schedule allows) to purchase useful accessories and clothing upgrades. Certain accessories will increase a given player's stats in a key area, and looking at player strengths and weaknesses to determine their most suitable accessory is a fantastic gameplay addition.

So what about the actual soccer games themselves? To make a long story short, they’re “OK”, and nothing about them really stands out, for better or for worse. Playing the games definitely beat completing minigames, and the arcade over-the-top gameplay is no doubt amusing. Games are played in a five on five manner, and with each player playing a certain position that’s twinned to their unique strengths. To win, it’s important that each team utilizes their Talent Bar – a special bar that is filled when orchestrating certain soccer moves, like a slide tackle, successful pass, or goal. The bar will supply you with turbo on defense and un-tackle-able jukes on offense, so you must be sure to use it accordingly. Maxing out the Talent Bar will allow you to use hidden player talents (which are bought outside of games) – just shake the Wii Remote and your player will unleash his or her special talent, whether that be an almost impossible strike, or unavoidable slide tackle. It all works well for the title, bringing a bit of added spice to an otherwise linear gameplay experience.

Just about all other control commands are handled via simple button taps of the Wii Remote and Nunchuk buttons, with an alternate horizontal Wii Remote-only method available for those who wish. I was also surprised to note that anyone luckily enough to own the Wii MotionPlus accessory can optionally use it. When utilized, pointing down with the Wiimote during gameplay will instigate both ground passes and shots, and the opposite when pointing up – a nice bonus that really can be useful. Unfortunately, the accessory can and often does get in the way when attempting to prompt a player’s hidden talent, because when MotionPlus is in use, shaking the Wiimote side-to-side will activate a dodge that would otherwise be handled with a button press. The game has a hard time recognizing the difference between an up-and-down shake for you hidden talent and a side-to-side shake, which is odd considering the versatility MotionPlus should add to Wiimote gestures.

Academy of Champions is nothing too exciting visually. The title sports a colorful kid-friendly aesthetic and doesn’t do much beyond that. Framerate never gets in the way and movements are fluid, but nothing really pushes the Wii hardware anyway. Cheery music, a few cheers and chants from the audience, along with a Sims-like gibberish language during dialogue sequences do well to give the game its own style.

When all is said and done, there really isn’t any one particular aspect of Academy of Champions that particularly appeals. Outside of the approximately eight hour single player, only pick-up games (that support only two players), single player minigames, and a special Wii Balance Board minigame are offered, with the title sporting no online play whatsoever. Special Ubisoft cameos appear throughout, including the Rabbids in single player and a special Team Ubisoft that includes the likes of Altair from Assassin’s Creed and Sam Fisher from Splinter Cell if single player is completed, all of which are entertaining, but certainly nothing to write home about. A much better executed single player experience is what’s missing here, and when single player is what you base your whole title around, then there’s not much else left to say.