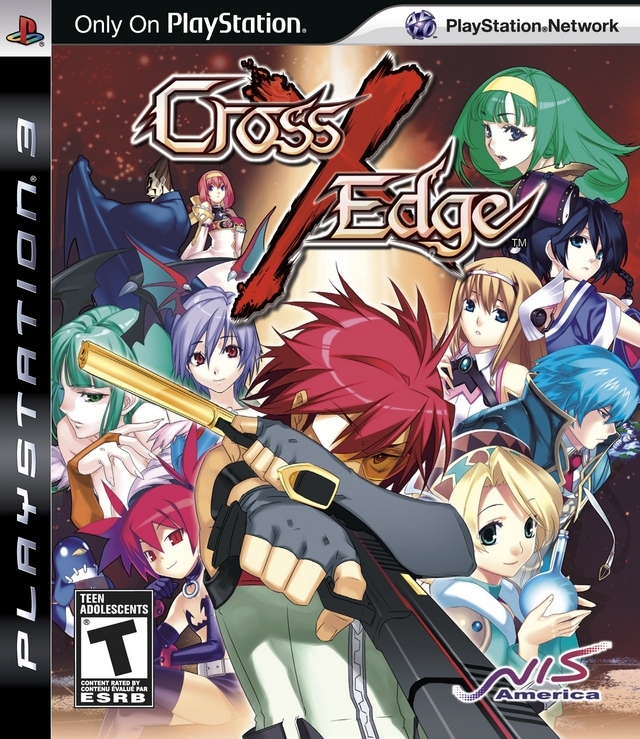 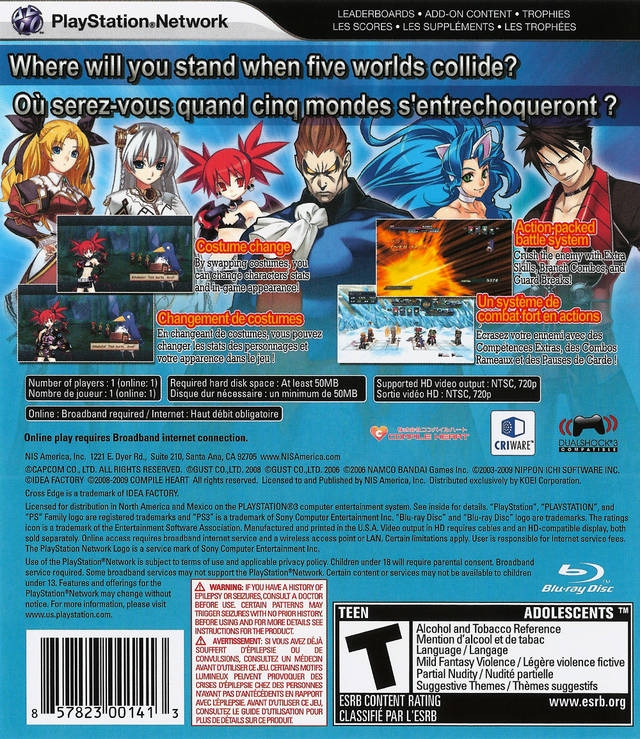 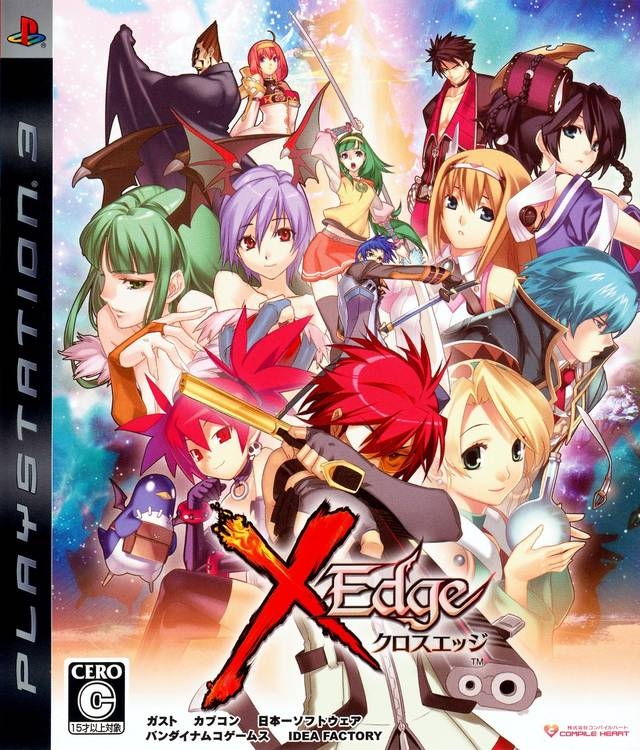 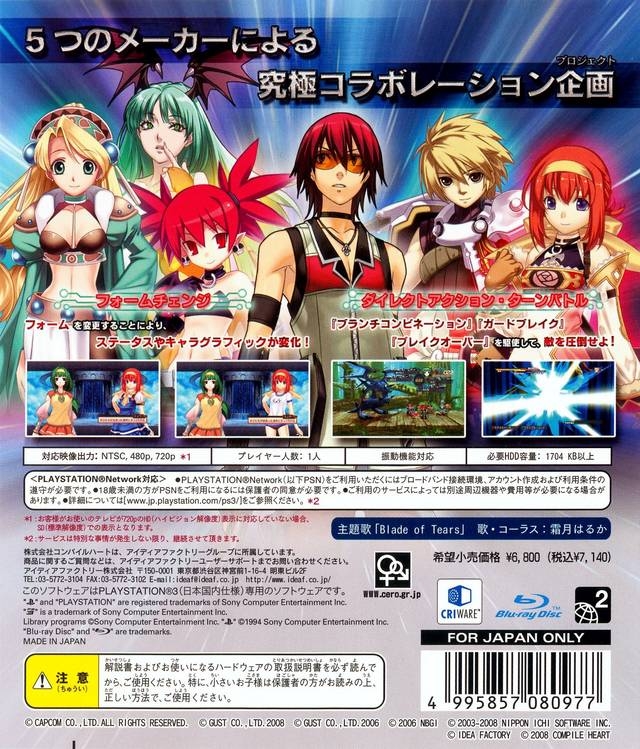 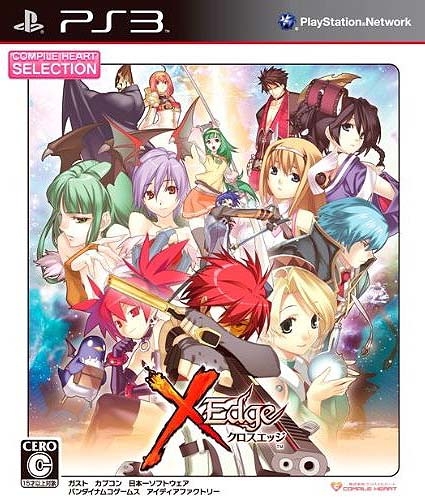 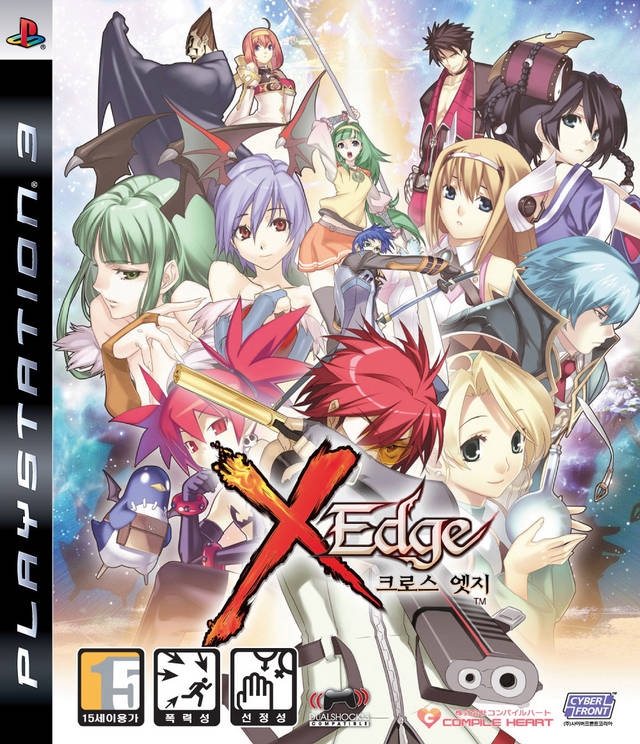 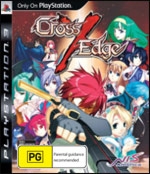 How could a game that brings characters from 6 good games possibly fail to deliver? Read on to find out.

Cross-over episodes on television are quite common in the West, but a cross-over video game is something almost completely Japanese. Luckily (or perhaps unluckily depending on how you look at it) one of those cross-over games has made it over to the United States against all odds. Cross Edge is a JRPG made by Capcom, Nippon Ichi, Namco Bandai, Gust, and Idea Factory which uses characters from previous games from all of those companies. While this seems like a way to make a great fan service title I’m afraid it hasn’t quite worked out for Cross Edge.

The story of Cross Edge is so obviously made up just as an excuse for all of these characters to be in the same game that it comes off like the developers had an intern type it up. There are three different worlds in the lore of Cross Edge: the real world, the fantasy world, and the demon world. The first characters you meet are York Neely and Miko Aiba from the real world. These two wake up and find themselves in a foreign land. After lamenting their situation they soon meet May, a non-player character, who informs them that their souls have been transported to a new world that has been made by the three worlds coming together, and for some reason souls are being dragged to this world. Most of these souls are just floating around without any tangible substance, but souls of stronger people were more attached to this new world and come with a tangible body. May then beseeches the two to help her find and release the weaker souls to their homes, and she would in turn find a way to get them back to their own homes.

I wish I could tell you that the story is not as bad as it sounds, but it really is. Perhaps the only real saving grace of the story is that some of the dialogue between these characters is funny. Even this dialogue isn’t that great though, and the humor only hits the mark every once in a while.

Most of your time in Cross Edge will be spent wandering around the world on a large over-world map much like older JRPGs and searching for souls, save points, and the next event. To find these souls you use a radar-like ability. By pressing the Triangle you can start a sweeping search of a small area which will make any souls, events, or save points visible. Souls are a lot like treasure chests. Once you find one you walk up to it and press X and you will send the soul back to its home as well as receiving a number of items as a reward. Save Points are like towns, but they amount to a simple menu which allows you to go to the store, revive dead characters, and upgrade items. You can save anywhere, so why these are called Save Points I’m unsure. The last things you will come across are events which are either main story events or side events. These advance the story as well as give you opportunities to listen to more random conversations between the characters.

While you aimlessly wander the world you will be pulled into random encounters to start battles. During battles you have control of four characters which you have placed on a 3 x 4 grid in the main menu. Each of these characters has four slots for actions they can do. These are mapped to all of the face buttons. Whenever you use one of the actions it will take up a certain amount of AP, so you can do as many actions as you want with any character until they run out of AP. The battle is split into the Enemy Turn and the Player Turn. During the Enemy Turn you can only watch the enemy’s taking their actions, but if you want to skip the animations you can hold the L2 button. During the Player Turn your characters will be given half of their maximum AP back and you are free to use as many actions as you want as long as you have the necessary AP. You can also move your characters around the grid for an AP cost or switch out one of your active characters for one of the ones you have on standby.

Each action that you take has a specific type and range. When you look at the properties of the skill you can see what squares in the enemy’s grid it is within range to hit as well as how many squares the attack will affect. The ranges of your attacks are important to think about when you are deciding on the formation for your party so that you don’t end up with an entire party of melee attackers in the back row of the formation where they can’t hit any of the enemies. The skill type is basically just a simple designation, but if you put skills of a couple certain types together you can start a combo. There are hundreds of these combos, and they are incredibly important if you want to do a good amount of damage and succeed in Cross Edge.

There are a lot of issues with the gameplay in Cross Edge. Since you are constantly just wandering around, there aren’t any linear portions of the game that can be used to level before the next boss, so every time you make it to a new boss you will be forced to grind. I probably spent around half of my playtime in Cross Edge grinding, which is a huge pacing problem. The battle system being so dependent on finding combos can make it extremely repetitive. Once you find a combo you don’t want to use anything else, but then that will slowly become an issue as you level and leave some characters behind and the combo becomes too weak. You think to yourself, “well that can just be solved by finding another combo” and you are right, but you have to remember that you have more than 10 characters each with their own specific skills. Since you have spent all of your time doing a single combo you are extremely unlikely to find another combo randomly while you do all the grinding you will have to do. So now you have to randomly try skills in different combinations to try and find another combo, which is just another kind of grinding.

The presentation is easily the worst aspect of Cross Edge, and it is definitely the worst looking game I have played on the Playstation 3. The battles are done with tiny little two dimensional characters that you can’t really make out details on even if you try, and there are frame rate issues that are fairly common on top of that. There are random three dimensional enemies every once in a while that look extremely out of place. The over-world map could honestly be from a PS1 game; I am almost certain of it. Conversations are presented in the classic "talking heads" motif so common in JRPGs, and the still images of the talking characters look nice. They remain too static and don't have the expressiveness that you get from better games that implement the motif, like Persona 4. Music is ever present, but is often so cheesy with generic rock that I had flash backs to old episodes of Power Rangers. Voice-overs range from Etna, who sounds pretty perfect and still has the same attitude as Disgaea games, to the Prinny, who sounds like a High School intern trying to do the voice of Prinny, and every where in between.

Cross Edge would probably have pretty good value if the gameplay wasn’t so bad. I was only able to get myself to play the game for 24 hours before calling it quits and writing this review but I was nowhere near done with the game. There are also three different difficulty levels, hundreds of combos, titles, and character costumes to find. You could probably spend hundreds of hours doing everything in this game, but first you would have to find the desire to do so.

I was really happy to hear that Cross Edge was going to make it to the West, since it seemed so unlikely that it would happen. It is unfortunate that when I got the actual game it was so undeniably bad. The presentation is horrendous, the gameplay is repetitive, and the pacing is pretty much nonexistent. I honestly can’t suggest this JRPG to anyone except the most hardcore fans of the characters present in the game. If you can not see a game with Etna or Felicia in it without purchasing then go right ahead, but remember that I warned you.