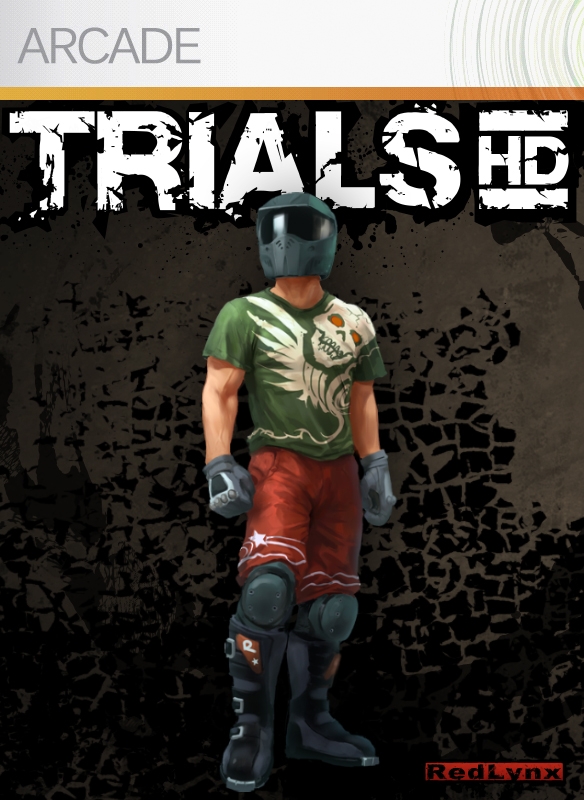 Trials in its original form is a PC game, and it was one of those games where I would spend literally hours completing the demo over and over again, but I never took the plunge and actually bought the full game despite the amount of pleasure I derived from that demo. So, when it was revealed that Trials HD would be part of the 360’s latest ‘Summer of Arcade’ line-up I was instantly interested, and this game shot to the top of my XBLA most wanted list. The transition from downloadable PC title to XBLA has served Trials very well, but it comes at the steep price point of 1,200 MS Points and this is certainly not a title that will appeal to everyone...

The concept behind Trials is deceptively simplistic, and the controls even more so. Your objective is to traverse a 2D obstacle course with your motocross biker – simply get from the starting line to the finishing line in as fast a time as possible and with as few faults as possible (where you crash your bike or you cause your biker to fall off). There’s a 30 minute time limit and a 500 fault limit for each course, but they should only become an issue on the more advanced tracks. Aside from these two limitations, as long as you cross the finish line you’ll be awarded with a bronze medal at the very least and you can then move on to the next track, unlocking extras along the way. 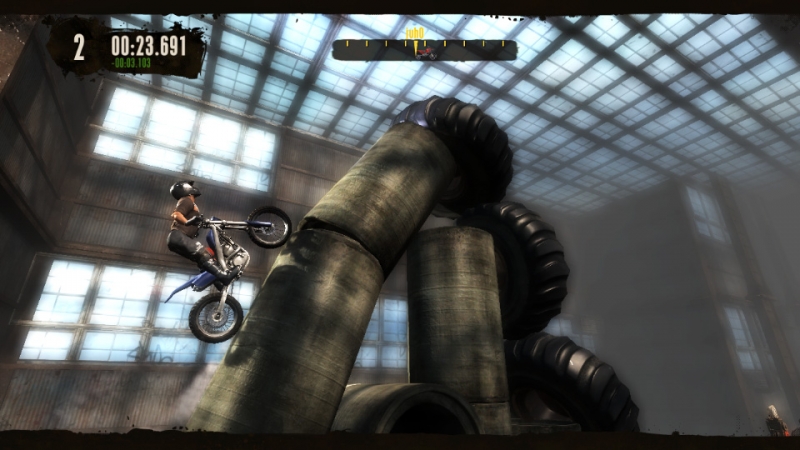 With regards to the controls, you can: accelerate, break and use the D-pad or analog stick to shift your rider’s position on the bike. That’s it - using a combination of these three basic controls, alongside the game’s physics engine, you can complete all of the courses in the game. Much like a ‘simple’ 2D platformer however (and in many respects this is a platformer), these simple controls belie the seriously difficult challenge you’re in for towards the end of the game, and mastering the controls is something you may never achieve.

The level design is ingenious throughout. Each of the 35 levels is unique, with its own distinct obstacle puzzles and gameplay requirements – from steep, seemingly insurmountable ramps that you’ll have to climb up with intense precision on just one wheel, to huge metallic balls that you have to finely balance on top of, exploding barrels and bombs you have to avoid triggering, and exhilarating rollercoaster-like sections which require quick reactions and feature Sonic the Hedgehog’s beloved loop-the-loops. Key puzzle assets are rarely re-used and the obstacles become more complex over time, so there’s always a fresh challenge that will require you to bring something new to the table if you’re going to overcome it. 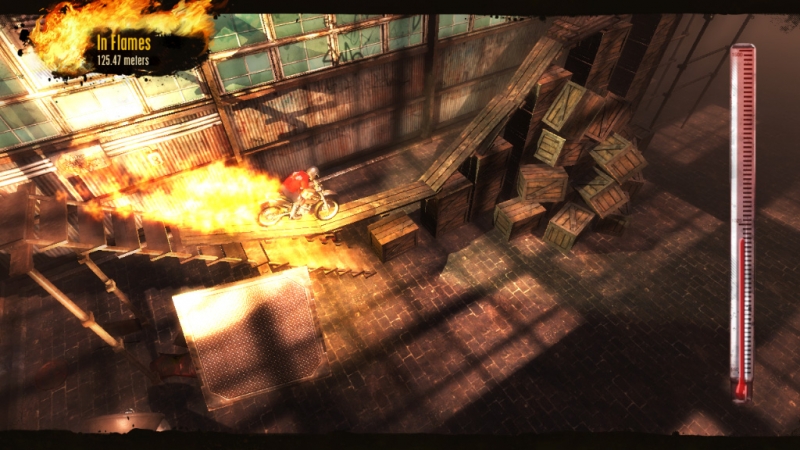 The difficulty curve can be quite steep at times – you’ll ‘fault’ (i.e. die) a lot, and trial and error is the key to eventual success. But every puzzle in the game can be overcome and the main game is nicely divided up into five difficulty levels – beginner, easy, medium, hard and insane extreme. Things start to get challenging on medium, hard is exactly that, and extreme can be immensely frustrating, but at the same time deeply rewarding. The difficulty level has been slightly overstated by some – this is nowhere near the hardest game on the XBLA and most people should be able to complete all but a handful of the extreme tracks with practice.

Fortunately there’s a checkpoint system, so when you fault you don’t have to go all the way back to the start if you don’t want to (although you can if you want, simply press the back button and the track will be instantly reset to the beginning). Press B at any point and you’ll snap back to the last checkpoint. It’s virtually instantaneous, so there are no annoying pauses. Indeed, this unobtrusive reloading system is essential to the game’s success and your enjoyment of it, without it I think the inevitable rate at which you need to reset back to the previous checkpoint all the time would quickly become tedious. 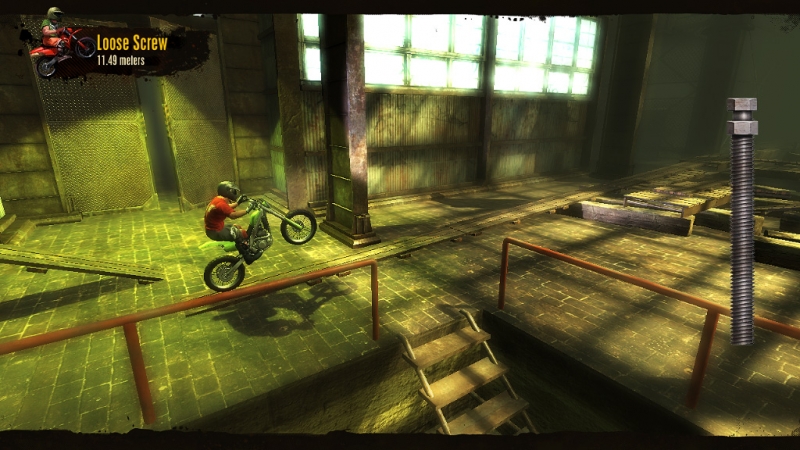 The visuals are in 3D, although the gameplay all takes place on a 2D plane. The graphics are sharp and clean, and this is certainly a very good looking XBLA game. There are masses of explosions throughout as you trigger the explosive barrels, and the lighting effects from these explosions are great. There are nice little details which really finish the presentation off as well, for example when the rider’s head smashes into a piece of wood or metal it goes all squishy and blood flows out while he yelps (note to self: must try harder to hide sociopathic tendencies in future reviews). Your rider is also imbued with ragdoll effects (as well as voice acting by the crew of Jackass apparently, although I can’t say I noticed), so he’ll flail across the track and smash into the obstacles if his bike explodes. If I have one complaint of the graphics it’s that almost all of the levels have dark industrial-like settings (even though they’re well illuminated thanks to clever use of lighting effects), and so some more level variety in this respect would have been welcome.

Trial HD’s main mode consists of 35 levels spread across five difficulty levels. As you progress through the game you unlock extras. First of all you unlock eight ‘Tournaments’, which are essentially a series of levels taken from the main game which you have to complete one after the other, but they don’t actually add any new content to the game and aren’t really of much interest. Secondly there are 12 ‘Skill Games’. These are essentially fun mini-games which are a great distraction from the main game. They include things like a ski jump where the aim is to launch yourself as far as possible off the bike and down a ski hill, or a pinball game where the aim is to get as high up the level as possible without crashing your bike using giant pinball flippers. As with the main game you are awarded bronze, silver and gold medals in the skill games, so there’s an incentive to replay them more than a couple of times. Other, more minor extras include leaderboards (complete with replays to help you if you need some tips on a level), extra bikes with different attributes, and customisation options. 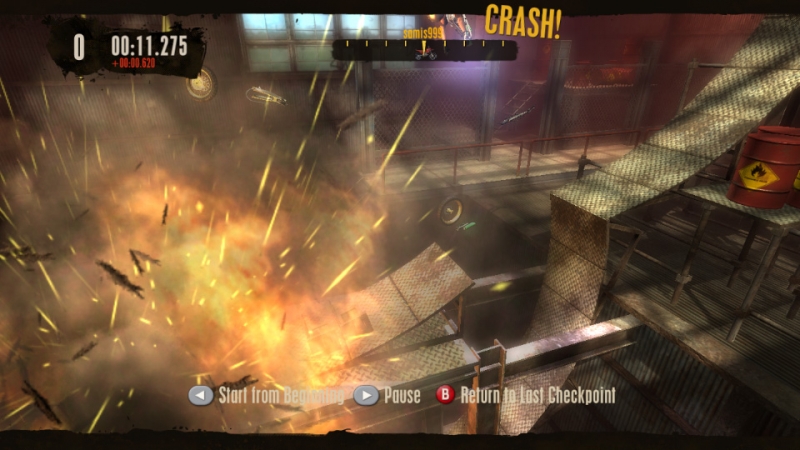 Perhaps the extra that has divided opinion the most is the level editor. This is a complete level editor, where you can make levels similar to those in the main game (if you’re good enough that is). There are extensive editing options, and a system for saving, managing and sharing your levels. Unfortunately, the reason it has limited use is because you can only share levels with people on your friends list, not with the entire community, so if you want to get access to plenty of new levels you’re going to have to start extending your friends list, and even then there’s no guarantee the levels will be any good. It’s undoubtedly a nice feature to have, but its general (if not individual) use as a means of extending the game’s longevity is extremely limited. As such, the core content of the game for most will be the 35 main levels and the 12 Skill Games. This isn’t a whole lot for 1,200 MS Points, and although the game’s innate addictiveness and replayability certainly eases the pain, an 800 Microsoft Points price point would have been much easier to swallow.

Trials HD is yet another excellent addition to the XBLA; a title certainly deserving of its inclusion in the ‘Summer of Arcade’ line-up. It’s a great looking Arcade title, and offers truly deep and addictive gameplay underneath a deceptively simple concept and control scheme. One word of warning though - unless you’re likely to use the level editor (either to design your own levels or to play levels made by friends), then you’re not actually going to get as much content for your 1,200 Microsoft Points as you might expect. If, however, the demo grabs you, then don't let the price tag put you off; this is one of the best Arcade releases of the year so far.