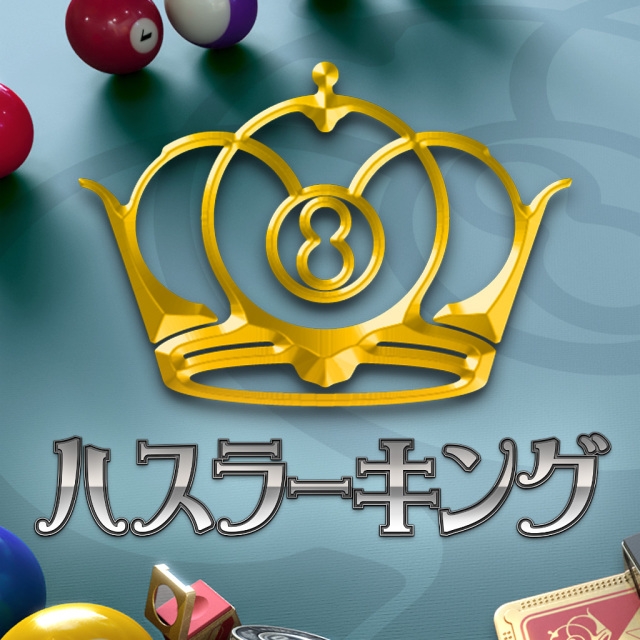 The billiards game with a name more fitting for a rap group.

Considering the vast number of games based around billiards that have been released over the years, Hustle Kings has a lot to live up to and has to make itself stand out among the crowd. And it succeeds.

The one major thing that sets this game out from the rest is the visuals. The billiard table and balls are so close to photo-realistic that if one isn't familiar with general graphic design, they could be mistaken for photographs. The only downside to the visuals are the pool halls which the camera starts at before zooming into the table. The pool halls break the immersion of being in a real-life pool hall due to their fake appearance. It would have been nice to see near-photo-realistic pool halls to accompany the amazing visuals of the table and balls.

The basics of Hustle Kings gameplay is done in a similar (perhaps identical) manner to every other billiards game on the market. You line up your shots with a glowing line that tells you where the cue ball, and the ball it will be hitting, will go. The one difference between Hustle Kings and the dozens of other billiard games, in terms of gameplay, is the sense of realism. This game's realism screams perfection, or close to it, even starting at the beginning of the tutorial when one realizes that to be extremely precise, knowledge on how to handle your stick is needed.

Precision is key in this game. Its one thing to win with luck, but if one knows how to precisely use proper English and form, very few will be able to beat you in a game of billiards. This fact is true for both the real-life and virtual game of billiards when it comes to Hustle Kings. If you haven't played billiards before, English is the term used for where one hits the cue ball. Right-English will send the ball spinning counter-clockwise, sending the ball twisting right; while left-English will send the ball twisting left. Sometimes a player needs to jump the ball in order to sink it, so bottom-English is needed. Top-English allows for your ball to spin backwards, normally after hitting your target. Learning how to use English is essential when it comes to playing Hustle Kings, due to trick-shot challenges and general play.

The one thing that Hustle Kings fails at is making precision shots easy. Aiming controls are a bit too jittery and quick. Tapping the analog stick or D-pad too hard will totally throw off the aiming mechanic, sometimes leading to frustration. Holding O down when aiming down slow down aiming speed a little, but not enough. There really should have been an option in the menu to slow down aiming sensitivity.

Power is the final piece of the control puzzle. There are two ways to control the power of a player's shots. One can either perform the old fashion flicking of the analog stick, or VooFoo Studios' nifty control addition, the response circle. To make a shot with the circle, quickly and accurately hit the X button when the moment arrives. A little red orb spins around a red circle. The farther away from the exact top of the circle, the worse the shot will be. Be within 85 - 100% accurate and the cue ball should follow the path one selected it to go without question. While the circle doesn't sound like a major improvement, it adds quite a bit more accuracy than the traditional analog flick, so VooFoo Studios have definitely added a great improvement in terms of power control for the cue ball.

Hustle Kings does a very nice job of presenting the player with plenty to do offline, and complements this with online play. There is a career mode consisting of four difficulties unlocked as one beats AI opponents and challenges. The mode consists of games of US & UK 8-ball, 9-ball, and Killer, also challenging your ability to think with trick shot and various other challenges. When a player isn't beating career mode, one can play all unlocked trick shots, purchase others with in-game credits, buy new cue sticks and chalks, and jump online to face other "hustlers".

Electronica, hip-hop, and light jazz is the music that one would expect from any high-class pool-hall, and this is pretty much what you get in Hustle Kings. It's actually quite nice to sometimes sit back and relax, taking each shot nice and slowly, just listening to the tunes... As for Hustle Kings' sound effects, nothing is out of place. That is expected, though, considering to the number of billiard games released over the years.

Overall, Hustle Kings is a great addition to the sports genre. It successfully replicates the game of billiards with realistic ball physics. Of course, billiards isn't for everyone. Some hate it, others love it. There are some issues with finicky controls, but on the whole, they are easy to get used to. Low resolution pool-halls haunt Hustle Kings' beautiful tables and billiard balls, but nevertheless, this is a great addition to the PlayStation Network and any billiard player's game collection.