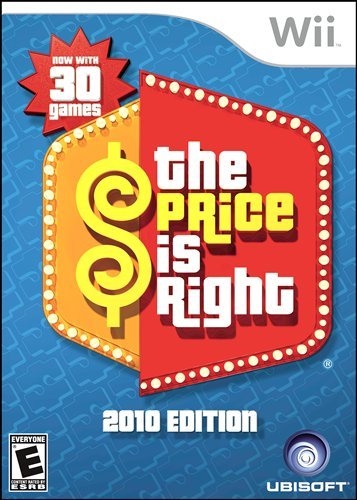 As a young child I always loved “snow days”. Living in the Midwest, the old saying is that if you didn’t like the weather that day, if you waited a few hours it would change. In my case, the Winters could be bitter and school got cancelled a lot. If the weather got especially bad, most of my time was spent watching boring daytime TV that I felt I needed to peruse, and the main attraction usually turned out to be the long running CBS game show The Price is Right. On paper, a videogame based on the franchise sounds great; The Price is Right 2010 has all of the features that any fan of the show would love. You are called down by the real announcer, Rich Fields, with the classic line “Come on Dowwwwn!” After you take your podium in the contestants' row, you then proceed to bid on any number of odds and ends in the hopes to move on to an actual game or even win a trip. On paper, as I said, this sounds good. In execution, however, this game is pretty flawed.

When you first begin, you have a choice between 16 avatars, all of which look like models for Abercrombie & Fitch. You can customize that avatar's name, clothing, and personality via a few mood themes. At first the building blocks for your character are limited, but more can be unlocked. The avatars seem far too limited and all pretty much look the same no matter how many “zany” accessories you toss on them. You then have a choice between two game modes, “Party” and “Single Player”.

In the single player mode, you then have a choice between “Classic mode” and “Three Strikes Mode”. Classic Mode is presented pretty much as the actual TV game show is, and allows you five chances to move on from Contestant’s Row, while Three Strikes Mode only allows three, as the name implies. The multiplayer is largely the same as the single player game, except you are playing against your buddies rather than a cpu. When this happens, you will have three turns in which you engage in a Contestant’s Row then a pricing game, a second Contestant’s Row, the winner gets a pricing game and so on. This is different than the 2009 game in that everyone got to play the pricing games together. This makes the multiplayer feel more like the show obviously, but could leave your friends out in the cold if someone sweeps the game.

In all honesty, I really have nothing too good to say about this game’s graphics. Supposedly they are “improved over the last game” according to the box, which makes me wonder how bad the 2009 game looked. I know that this is a “party game” and one should not really expect a whole lot of graphical flourish, but I have seen value bin flash-based PC games that look better. While I wasn’t a huge fan of it, the art direction is consistent. The characters and sets go together well and give the game a unique look.  While the game renders the characters fairly well in its cartoony 3D style, they act weirdly and have jerky movements, as if having a seizure, and seem to be blurry and almost muddy sometimes. This seizure-mode is largely due to your character's idle animation being no more than something like three seconds long, but the crazy jerkiness kept drawing my eye. For something as goofy as a small representation of myself, I felt the avatars were not well done.

The game features real clips from the show, and I believe that a lot of the problems arise from that alone. Since you are constantly seeing small video clips of different pieces of merchandise form the real TV show, the game constantly and abruptly loads as if this was a 15 year old CD based game. Once you’ve seen the clip, it then abruptly cuts off, sometimes in mid-word. Another problem with these clips, and really any other video, is that it is all presented on a tiny square that takes up maybe 1/8th of your TV screen. At any given time you have a large text box showing what the presenter is saying, a jerky avatar, and a teeny tiny and somewhat blurry video clip running. This all makes this game look and run as if it was thrown together.

The aforementioned loading gets barbaric at times and makes this game run so slowly that it is insanely boring to play in all modes. The game play is also very boring as the player really has very little to do rather than hit left and right and the “A” button to choose prices all the time. There are some Wii motion controls, most noticeably on the big wheel just before the Showcase Showdown, but these instances are few and far between and seem tacked on.

Aside from the game’s shoddy voice work and video editing, there really isn’t any music to speak of, meaning that you'd really better love the game's theme song, because you will hear it constantly. I bet if I close my eyes I will still hear that music haunting me. These problems alone make the game seem incredibly cheap and low-budget, making the $36.00 price tag ludicrous. Especially with no other bonuses except collecting avatar parts, video clips of the show and achievements to speak of.

The Price is Right 2010 for the Wii is a real shame, as I really wanted to have fun and enjoy a show I liked as a child. Although the game bears a small resemblance to the real show, every last bit of the experience is wasted. Whether it be the lack of Drew Carey as an onscreen character, shoddy voice work, or bad editing this game is something to stay clear of unless you are the most diehard of diehard The Price is Right fans. Maybe the next game will get it right and fix these problems, but as it stands, the price is wrong.