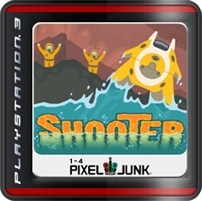 A fitting finale for a great year of PSN titles

One of my favorite parts of gaming is discovering something new, whether it is a new genre, new game, or a new studio. The Pixeljunk series has quickly made me a fan of its developer, Q-Games. They’ve shown that they can make great downloadable titles in several different genres, such as the platforming Eden and the strategic Monsters. Now that same company has set its sights on the arcade shooter genre.

Surprisingly, the aptly named Pixeljunk Shooter released within a month of Gravity Crash, a title on PSN from the same genre with similar spaceship shooter gameplay, but while Gravity Crash seemed to harken back to older games from this genre, Pixeljunk Shooter takes the genre in a new direction that was impossible in the times of those older games. The question still remains, which is the better game?

Shooter is the first game in the Pixeljunk series to have an overarching story beyond a simple background to the gameplay. You play as a rescue ship sent to one of humanity’s many mining colonies that are being used to search for new resources within assumedly uninhabited planets. The mining facility has sent out a distress signal and your job is to take one of the EMS Pinita Colada’s rescue ships out onto the planet to find out what has gone wrong and save any survivors. As you work through the game you’ll gain clues to what has gone wrong and why the planet has become infested with strange creatures that try and kill you at every turn. Although the story is nothing particularly thrilling or unexpected, it is interesting and works well with the gameplay.

The campaign is divided up into three “worlds” and each world is divided into four regular stages, with a fifth consisting of a boss fight to cap off the world. You choose which stage you want to play from the main menu and each stage has five levels that you have to get through before completing it. Progression to new worlds is accomplished by collecting a certain amount of treasure in the stages you complete. Treasure shows up as diamonds strewn through the levels that you can grab with a grappling hook. This forces you to explore the levels you go through instead of just trying to complete them as quickly as possible.

Anyone with a handle on dual analog controls for arcade shooters will feel right at home. The left analog stick moves your ship in whatever direction you point, while the right analog stick is used to aim your weapons. You shoot rockets with R1/R2 and fire off a grappling hook with L1/L2. Unlike other games in the genre you can smack the walls in Pixeljunk Shooter as much as you want without sustaining any kind of damage. The only things that can kill your ship are overheating when you are close to hot substances, such as lava, or when you are shot by an enemy. When your ship dies you only have to restart the level, so it usually just loses you less than a minute of progress.

At first this may sound like it would take the tension out of the game and kill what was great about the genre in the first place, but this is where the survivors come in. The goal of each level is to save or kill all of the survivors in that area which will open the door to the next level. Do this five times and you have beaten the stage. Every survivor that is killed shows up on an indicator in the bottom right corner and if you get five markers on this indicator you lose the stage and are forced to start over from the first level of that stage. Thus each level becomes less about surviving an onslaught of bullets or deftly maneuvering through a tight crevice, and instead about exploring the level, as well as slow and deliberate thinking as you try and come up with ways to work through all of the obstacles before you without killing any of the survivors you have come here to save. Obviously for this type of game to work you need obstacles, and while there are enemies that will pop up and shoot you quite often, the true obstacle in this game comes from the environment itself.

If I was asked what the star of Pixeljunk Shooter was I would have to say the environment. As you work through levels you will encounter lava, water, ice, explosive gasses, and a strange black magnetic liquid. These are your main obstacles throughout the game and easily the most innovative and interesting part of it. Fluids act exactly as you would expect them to in every interaction you have, which makes it fun just to play around with them. The puzzle of each level comes from how these different elements interact and how you deal with them, especially because many of these can kill survivors if they are unfortunate enough to get caught in one, so you have to keep not only your own safety but also the safety of the survivors in mind as well.

Water cools lava to a destructible rock, while ice can be evaporated away with lava, and noxious gases can be lit on fire with lava. These interactions and others are your tools for getting through each level, but if this were the only element to the game it would be hard pressed to have enough variety to keep someone interested, so there are also items and powerups along the way. Powerups include a suit that lets your ship shoot out a never ending stream of magma, or invert your ship so that water is the enemy and lava keeps you safe. My only complaint is that there were a lot of powerups and items and it seemed like the moment you got a handle on one you were introduced to another.

One of the few issues I have with the gameplay of Shooter as a whole is that it spends so much time introducing new concepts that most of the game ends up being pretty easy. Perhaps this is partly due to how many new elements they wanted to introduce in such a short game, but it leaves me wanting something that is not just fun to play around with, but also brings me a challenge, be it from the puzzle aspects or the more combat driven portions of the game. With that said the game has some fantastic new ideas and was fun the whole way through, with some levels that were great puzzles and bosses that offered some classic arcade shooter action. I just hope that the encore version of this game uses these ideas that are already introduced and ramps up the challenge a bit.

Pixeljunk Shooter is quite a pretty title with its cartoony graphics, reminiscent of Monsters, and beautiful fluid physics. Fluids move and interact in picture perfect fashion and it is obvious a lot of detail went in to trying to make them realistic. Accompanying these visuals is an eclectic soundtrack from High Frequency Bandwidth which goes along with the gameplay perfectly and is pretty catchy to boot. I did notice some strange shimmering effects to some of the liquids every now and then, and the detail for the rest of the environment doesn't really hold up to that put into the fluids, but these are relatively minor complaints of otherwise great presentation.

If there’s one part of Pixeljunk Shooter that isn’t exemplary it would have to be the value. My first playthrough took me only 4 hours and 10 minutes, and I was sad to see it end. There is an obvious lead in to a sequel or downloadable content of some sort at the conclusion though, so hopefully I will be able to play new content in this game world at some point. The entire campaign can be played solo or with a friend in local coop, so you might be able to get two unique playthroughs out of the game, but coop does not change the level design in any meaningful manner. Shooter only costs $10 dollars, so it is not as though this is bad value, but it doesn't live up to the other aspects of the game.

If it weren’t for my dislike of Racer I would think the Pixeljunk series could do no wrong. Another year and we have another great Pixeljunk game in the form of Pixeljunk Shooter. Sure, the value is only average and it is kind of an easy game, but the fluid physics are beautiful to watch, the puzzle gameplay is an interesting departure from the norms for the genre, and I cannot wait to play the hinted-at encore.