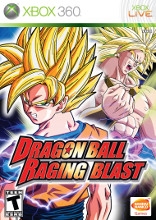 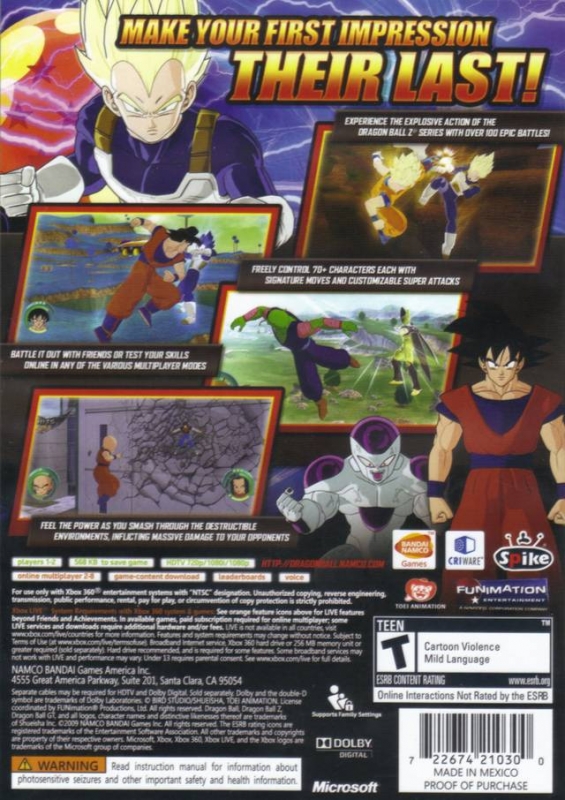 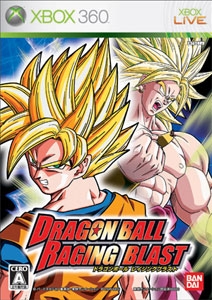 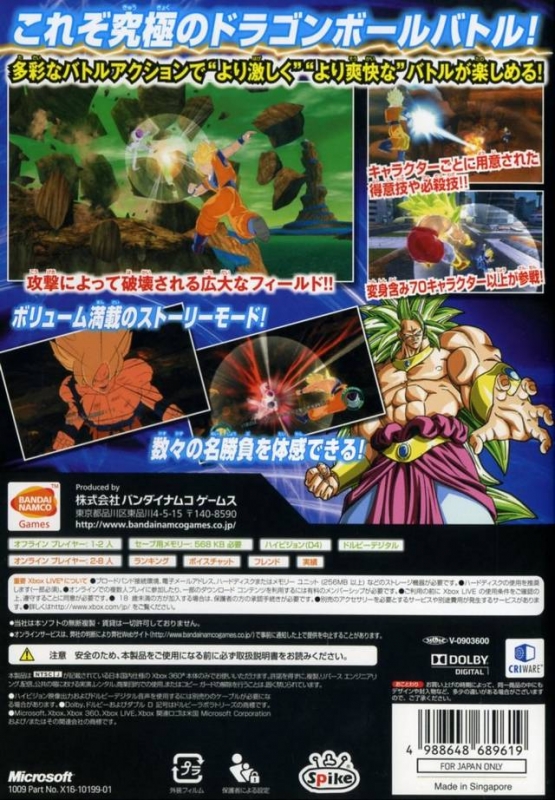 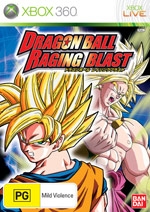 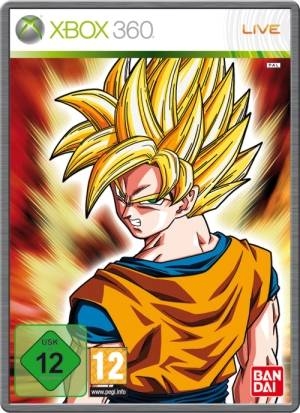 Will this game be the ultimate Dragon Ball experience?

After the letdown that Burst Limit, the first high-def age Dragon Ball game turned out to be, the fans of the series eagerly awaited the new installment called Dragon Ball: Raging Blast, eagerly anticipating if it will be vindication. The game also marks the return of the Tenkaichi formula seen in previous iterations of the series to the HD front for the first time.

Looking back to the past we can find that the PS2 received two parallel Dragon Ball sagas: Budokai & Budokai Tenkaichi, each of which brought three installments. Each installment included new additions and improvements, and it wasn't until the last one arrived that we finally found a really solid title, worthy of our full praise. And it was that title that linked us to Burst Limit (a truly disappointing follow-up to Budokai 3) and now on to Raging Blast. With such a background, the uneasiness builds up as we fear we’ll just find more of the same. Budokai Tenkaichi 3 was one of the best licensed games launched on a home console in its time, but let's admit that the franchise had more than a few faults with subsequent releases, although each not completely without some merit.

So what do we actually find in Raging Blast? Simply put, a lighter version of Budokai Tenkaichi 3. The game sports a simple and accessible (yet still entertaining) combat system, a very complete lineup of fighters (however still not complete enough for our expectations), a graphic design that would have been impressive a few years ago, and an especially nefarious camera system that threatens to bring down the title.

The game adapts the Tenkaichi formula without adding any innovations beyond the occasional new attack move to send your opponent flying against the far end of the battlefield. The series unique game mechanics and combat style hasn’t been modified, with the game once again sporting a third person view in which our character moves in the direction of where the enemy stands. We have the freedom to move around our opponent at will, be it by running, flying, floating or sprinting around. We also get to attack our rival from up close, or using special far range attacks. Our enemy has the same freedom, and in order to win you have to use all the well known tricks of the franchise; Ki elevation, super techniques, and fulminating up close punching combos. Like always, all of the action is topped off with drama filled cinematic clips as special combos are launched.

When Raging Blast was announced, the developers assured us that the final version would include over 40 unique fighters, but that costume changes and other variant versions of some characters would increase the total number of playable units to 120. This turned out to be true… in part. The lineup is large, but it is guilty of the sin of “over-cloning”. All clone combatants have the same basic battle moves, postures and reactions in combat with only the special moves differentiating one from the others. For example, all Saiyans can perform the Kame-Hame-Ha, but only Krillin can launch the Solar Disk move and only Vegeta can release the Final Spark move. Special attention was placed here by the creators, who not only reproduced with detailed fidelity the feel of these moves from the TV series, but also allowed us to be able to alter the effectiveness of the move by pressing specific buttons and pointing in certain directions to increase the damage inflicted on the foe during the cinematic attack. This is a notable improvement from the option of simply lying back to watch the clip unravel during these attacks.

Raging Blast has a respectable variety of game modes with over a half dozen well differentiated categories available. In the main menu we find access to Dragon Battle Collection, Battle Trial, Versus, Xbox Live, World Tournament, Personalization, Dojo, Museum, & Options, with quite a few sub-categories in each of them. Of course not all modes imply game variants, such as Museum for instance, where you only get to see saved game repeats and listen to BSO, or Options where you only get to equip our characters with objects and abilities. The true soul of the game lies on all the other truly playable options, and is spearheaded by the Story Mode.

The best part of the Dragon Battle Collection is that it doesn’t force us to follow the same order of battles as seen in the series. Many battles are unlocked initially, and only combat that's a product of a previous victories in the series has to be unlocked to be played in the game. This allows you to start wherever you want in the series, although we miss that there are no cinematic intros to each battle. Games have some short spoken sequences, but the fights lack a proper intro and we jump right on to the battles, thus resulting in combats with little to no context to back them. Furthermore, the game doesn’t always present events as they occurred in the anime. For instance, Goku doesn’t die when he and Piccolo fight Raditz.

Beyond this, we have the usual option to configure our character at will by using items and extras obtained in the several game modes. There is also an extensive training mode (perhaps too detailed in fact), and various extra modes: survival challenges, race the clock, etc. Finally, there is an online mode full with world rankings and combats - an inspired innovation, although it is still too shallow to create a vibe in the gaming community. They do offer us the option of using personalized characters in this mode, and even the option of downloading some content from the web. With all these options, Raging Blast is the most extensive Dragon Ball game to date and it guarantees hours and hours of fun.

The graphic aspect does enjoy a nice facelift with regards to previous generation Tenkaichis. The greater fluidity of the game allows us to get a deeper feel of the battles it attempts to recreate. The overall modeling and animation of the characters has also improved, and a vast repertoire of facial expressions for the combatants has been added, allowing you to appreciate them at any moment, whether it be before the action, during combat, or even during the cinematic clips. Sadly, the poor camera often conspires to make it difficult for us to appreciate them.

Everything in Raging Blast seems geared to create a visual impact, and it usually achieves it, although it occasionally gets bogged down by some peculiar elements. The largest fault is easily the camera angling system that can only be termed as nefarious. For instance, if a foe rises in the air, the camera will not follow him but would rush to position itself behind us and then start angling upward, leaving us temporarily blind about our opponent. The fact that the game stimulates fast and agile movement doesn’t help either, since during particularly fast-paced scenes the camera seems to go mad and begins rotating about on some invisible axis. Also, when in battle, if both characters race away in opposite directions the camera acts confused, as if unsure about which character to focus on.

Regarding the scenarios, these can be destroyed, but with a degree of detail, collision detection, and overall complexity well below what we would expect nowadays. They are, even inferior to destroyable scenarios in real time games of the same genre from the past generation of consoles. In the sound department the game follows along the same line of previous titles. The voice acting is either in Japanese or English, but in no other languages. The tunes are the same repertoire and pulled straight from the TV show (and they’re beginning to feel spent on our ears). I mean, the fans want them and they should be there, but there are no innovations.

In the playability department, the game isn’t all that much at fault. The game experience overall is good, but the camera control remains the elephant in the room that keeps up popping its trunk every now and then. Raging Blast is a fair Dragon Ball simulation, with some points in its favor and against as a purely combat game, and with a somewhat pronounced learning curve that will make it easy for you to identify the ‘hardcores’ from the occasional ‘passerbys’.

This game won’t let down the true fans of the series, but even they will probably end with the feeling of having wanted somewhat more than what the title offers. Raging Blast moves the Tenkaichi concept well into the new generation of higher definition consoles and is obviously the best reprisal of the classic anime battles one can find in the PS3 and the Xbox 360… but it still could have been better. They could have included more characters instead of apparently reserving them for future “product lines”. They could have added more variety, depth, and tactics to battles instead of the current race to see who can charge his power bar faster to trash the opponent. Finally, they could have tried to push the console’s graphic capabilities a little further.

The end result is a satisfactory but unsurprising game. It isn’t a failed release, because it won’t let down those who sought a Tenkaichi in higher def, but it was a missed opportunity to evolve the formula to the next level using the possibilities posed by the more powerful platforms. So in essence, we end with just more of the same, with a commendable amount of extra modes and such, an average amount of fighters in the roster, and little practical difference between them during combat. Well, maybe next year…