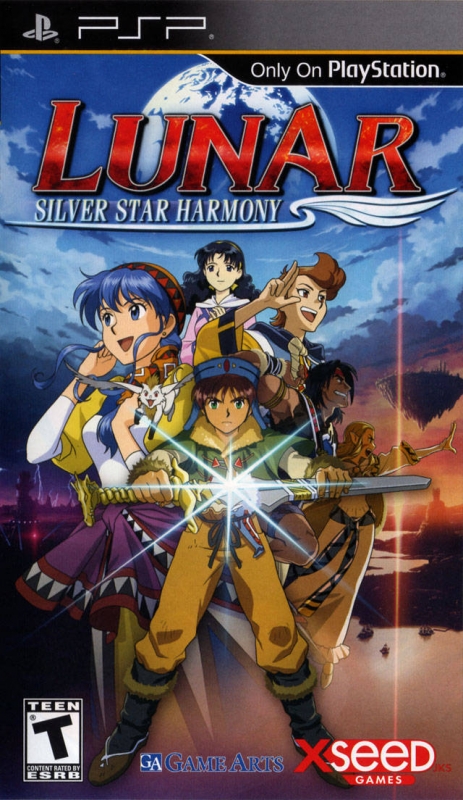 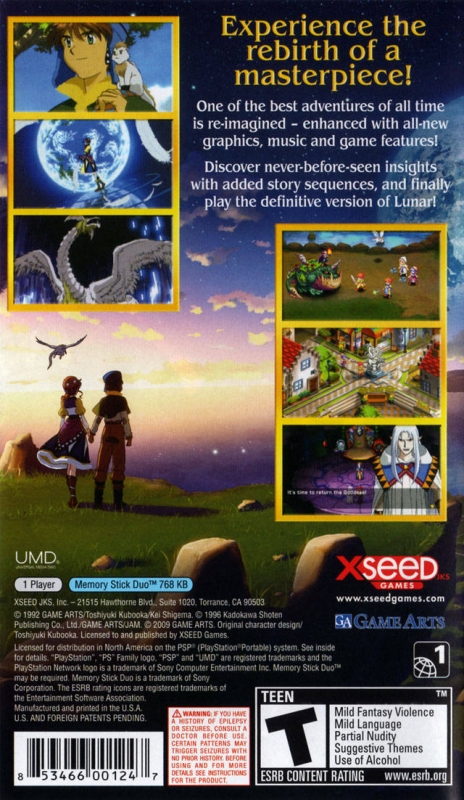 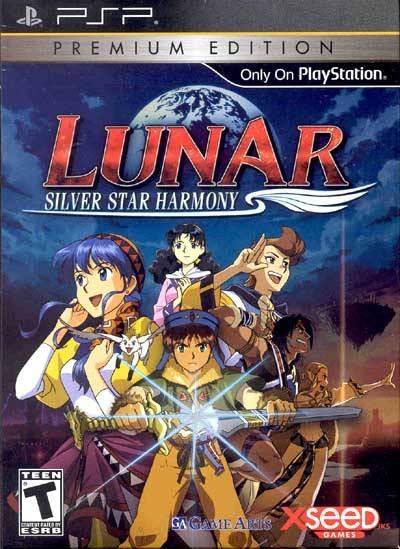 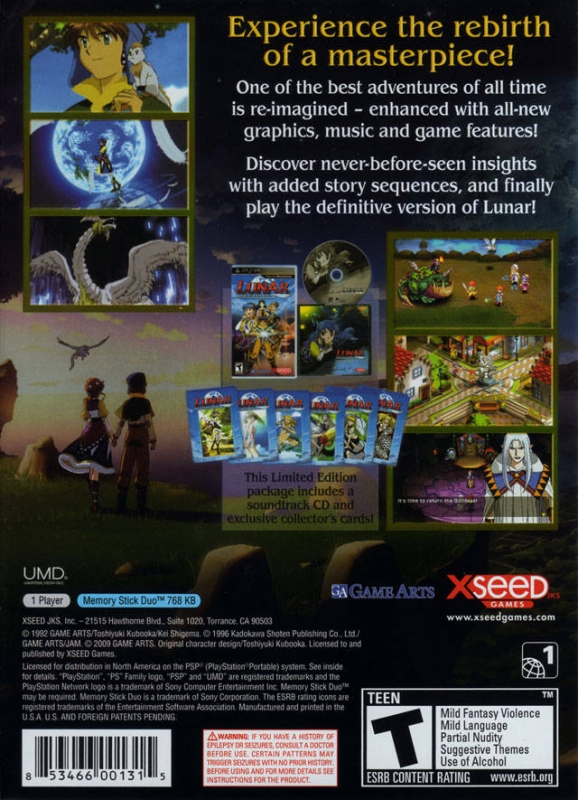 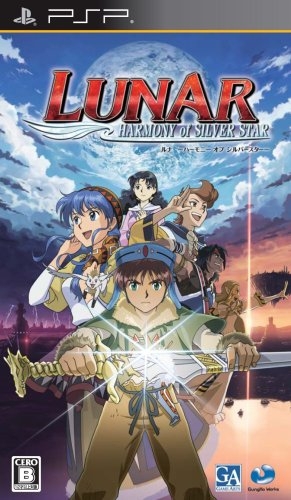 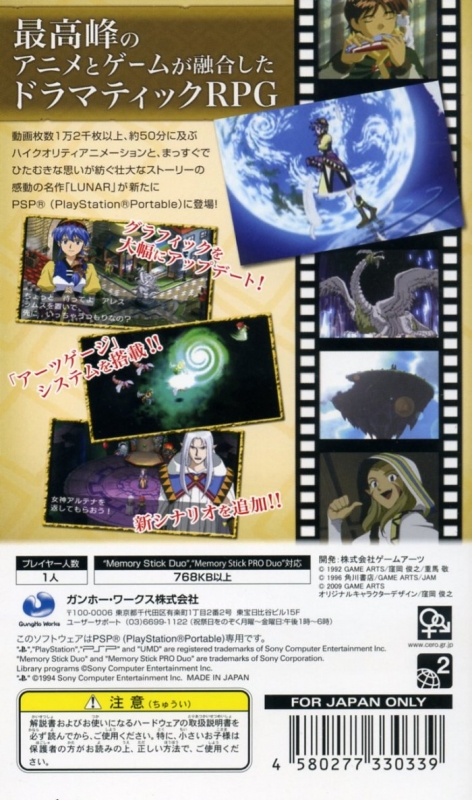 Lunar is a classic story. So classic it teeters on the line with cliché and predictable, but it never fails to entertain. I first played the Playstation version of Lunar, called Lunar: Silver Star Story Complete, about 10 years ago and the story is largely unchanged. The world was saved a generation ago by the legendary Four Heroes. Now, young Alex has grown up idolizing one of the heroes and sets out on an adventure to become the next Dragonmaster.

Of course, the world begins to face dire peril yet again, pushing Alex and his rag-tag group of adventurous friends along their journey to become the new heroes for a new generation. Swords, sorcery, dragons, and evil emperors populate the game as much as the tongue-in-cheek humor the series has always been known for. Through a medieval tale, the game often comments on the foibles of the modern world through rather overt satire.

The characters are as stock as any older anime you would find. Accompanying Alex are the headstrong princess, the rebellious thief, the vain young mage, the ingénue, and the verbose anthropomorphic critter. These characters could be found in dozens of anime shows and JRPGs, but this particular whimsical blend still holds up well today.

The current game holds only the most fundamental basics in common with its original 1992 release. The story, characters, and designs are the same. The battle system is essentially the same as the original, but much refined. There ends the similarities. The sprites and backgrounds are completely re-done and much improved from any previous version. Anime cutscenes were added for the Silver Star Story Complete release in 1996, but Silver Star Harmony completely re-masters the music and records new voice actors for everything. Both these are big improvements for the audio portion of the game, bringing a far more orchestral sound while retaining the original songs which are a cornerstone of the game. The voice actors are much improved as well. Nall in Silver Star Story Complete sounded like a kid talking with helium while Silver Star Harmony’s Nall sounds human. Granted, it’s a flying cat-thing, but it should sound human.

All that said; the game is no graphic accomplishment. You will never be wowed by the graphics or cutscenes. The voices are improved from previous iterations, but still far short of current big-budget titles. While the music is improved, certain themes are repeated so much you’ll often just want to listen to your iPod while playing.

Silver Star Harmony keeps every facet of the original story and actually expands on it. There are sequences where you interactively play through the defining moments of the legendary Four Heroes, granting a deeper understanding of what shaped the world you’re exploring. Most of this is accomplished in a much-extending opening to the game, but it appears a few times later as well.

The essentials of the battle system are retained. It’s mostly classic turn-based combat with characters and enemies acting based on speed values each turn. The one thing that really separates it from other older JRPGs is the movement of characters. When performing a melee attack, the characters or enemies have to move and then attack. Depending on the movement stat for that sprite, it may not be able to make an attack on a target too far away. This adds an extra element of strategy to magic users and ranged weapons.

Silver Star Harmony adds a few new elements to the combat, too. First is the addition of pre-set battle commands. You can set three slots with different, customizable battle commands which are very useful for little grinding battles, though during boss battles, standard commands are the way to go. One custom command you can use is fairly useless, though. That command is “Single AI.” Supposedly the mode should choose the best action for the situation, but I often found it just wasted my magic points and items that replenish magic points. As soon as Alex unlocked Sword Dance, he just used that on everything and other characters would feed him items as his MP approached zero. His standard attack does almost as much damage. I had far more use out of pre-set commands for everybody attacking.

The other addition made to combat is the Arts Gauge (AG) attacks from the Game Boy Advance Lunar release several years ago. These are high-power attacks with nice animations that cannot be used very often, but are a real treat to bust out against bosses. Every character begins with one but a special second and uber powerful AG attack can be earned if you meet certain parameters.

Lunar is following suit with most RPGs, replacing random battles with enemies appearing in dungeons as you wander around. Despite being very apparent, they usually impede your path, so they aren’t really avoidable. The world map is simplified by selecting one of the locations you have access to and the game even has a reusable item that lets you fast-travel to any location you’ve already visited. You can even use this item from inside a dungeon. Both the combat and stories take their time unfolding, often requiring you to spend a couple of hours in a dungeon on a tedious quest just to advance the story a bit. One big annoyance for me were the conversation requirements occasionally required to advance the story. I found myself in multiple situations where I was required to speak with several NPCs in a specific, but hard to guess order so the story would keep going. Talk to Joe, then Chloe, then Jack, then Joe again. I’m not going to tell you, though; you’re just going to wander around this town trying to figure out what to do for several minutes. Bad form, Lunar, bad form.

Leveling up is very basic. Battles yield up experience which leads to level gains, healing the characters and learning new skills along the way. There is little micromanagement, either. As you progress through the fairly linear story, you’ll find new towns that are guaranteed to have new, better equipment for your characters. The shops are actually one of my favorite little tweaks. They are well laid-out, making it easy to see if the new equipment will benefit your character, but the real charm is access to the equipping menu from within the shop menu. You can buy better stuff, equip it, and then sell the old stuff in a single conversation with the store owner.

The story doesn’t branch much at all. You can freely explore areas you’ve already been to, but the experience will be meager and there aren’t any new areas that open up. Once you’ve completed the main story – which will run you about 30 hours – there’s really nothing left to do. Fortunately, the game carries a slightly lighter price tag than other marquis PSP games; costing only $30 instead of the normal $40 for new games.

Overall, Lunar: Silver Star Harmony is very much the same game in spirit as all the other iterations throughout the last 18 years, but XSEED and Game Arts have done nice work during that time to constantly improve and shine this classic story. Silver Star Harmony is the pinnacle of these efforts thus far. It’s a great, addictive, if leisurely example of a classic JRPG remade for a new generation.