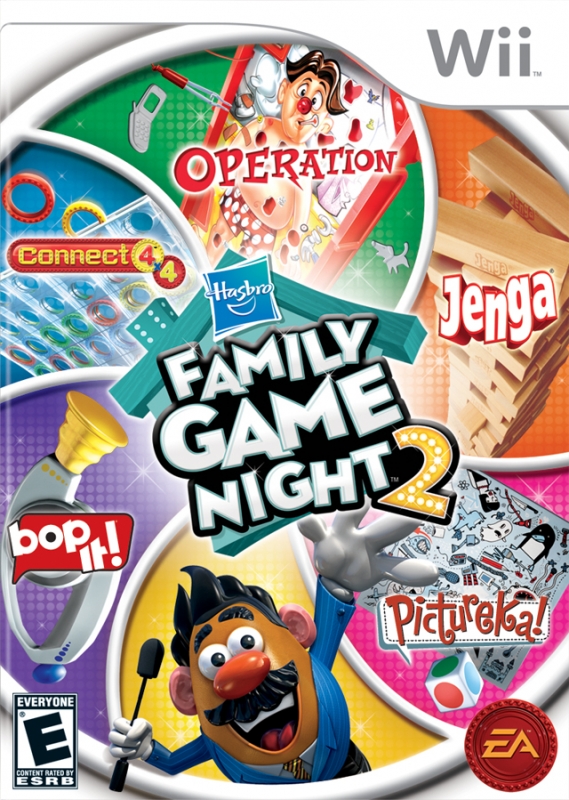 Sometimes it's just better to invest in a real board game.

Hello, and welcome to Hasbro Family Game Night… 2! There’s not a whole lot to say; it's a collection of five Hasbro board games: Connect 4x4, Bop it!, Operation, Jenga, and Pictureka. In the transition to the video game format, many of these games have changed drastically, and barely resemble the board games on which they are based.

On the one hand, this is a video game; on the other, it’s trying to resemble and stay true to the board games. What comes out can vary from being fun to just a bit of a mess. That’s not to say that any single game isn’t worth playing, just that some don’t survive the journey to the video game world entirely intact. Sometimes it’s because they change too much, and in other cases, it’s because of how the controls were implemented.

Sadly not as fun and challenging as the real thing

One of the games that are the best representation of the issues the game has is Operation. The game is mind numbingly easy, in stark contrast with the real Operation, which requires a steady hand and nerves of steel. Operation requires you to point at the screen, grab the item, and then twist and turn it through these hoops, which are shaped like the item, but give you a mile to work with if it’s not perfectly lined up. This is the big reason the game is way too easy, to the point that it’s not memorable, nor fun to play. You are timed, but the game moves at a snail’s pace, waiting for load times, waiting for you to become able to grab the item, etc, it kills the time you’re allowed and it’s not because of your lack of skill, it’s because the game treats you as if you’re constantly having a seizure while playing, and can’t hold the Wii remote steady to save your life.

The other game that didn’t quite translate to video game form is Bop it. While a much better representation of the actual game, meaning it has modes that actually resemble that of the Bop it game, it’s too easy, has motion control issues, and is not nearly as satisfying as going out and buying a real Bop it. The game is too easy because it allows you much more time to do the action than the actual game would allow. The motion control issues arise when you try to perform the action they tell you and it doesn’t work but randomly shaking the controller seems to, but the actions they ask should not be that hard to implement, many games before it have done every motion, like twisting the Wii remote.

Pimp out your potato!

Jenga is the middle ground game, it’s not a weak representation: in fact, it’s pretty faithful to the original, and has a few perks to make it appealing, but on the other hand it’s cluttered with a few issues. This game looks and feels like Jenga: you pull out the block and you put it on top of the tower, until you do something stupid and everything crashes down. The issues arise when you try to pull out the blocks, it uses the IR pointer which is a good thing but it’s not that intuitive, especially when you compare it to something like Boom Blox, everything just feels too loose. The other issue is, one of the common moves in Jenga is the push the middle block out to put it on top (as opposed to pulling the side blocks out) simply cannot be done in the Wii game.

Pictureka is one of the more enjoyable games. It’s more or less a Where’s Waldo type game where you’re given a picture to find and allowed a certain amount of time to find said picture. It’s simple, it’s slightly mindless, but it works and it’s entertaining. There isn’t much else to be said. It plays a lot like the real thing, the controls work, since it’s all pointer based, and there isn’t that feeling like they dumbed things down for that game.

My personal favorite would be Connect 4x4. It’s a perfect representation of the actual game, it’s the one game they gave an actual AI to, which will wipe the floor with you, I might add. Connect 4x4 is the 4 player version of the original Connect 4, which is one of the more strategic games out there. It’s all about planning and guessing your opponent's moves. Add two more players to the mix, and things become very complex and hard to keep up with, which is great for people who like that sort of thing. To boot, they also included a normal two-player Connect 4 mode.

It’s really a mixed bag with the games. On the one hand they are supposed to represent the original board games, and most of them fail at this, lowering the difficulty and changing the gameplay. On the other hand, it’s a video game. They added remix modes for the games which are exclusive to the video game, but this isn't enough to redeem the game. The bottom line is this: there are three games which are vastly inferior to the source games, and two that really work, and for the most part, work by sticking as close to the original game as possible.

Bop it! Waggle it!

Playing these games multiplayer is much like playing them single player, except you’ve got friends to play with. The same issues with controls and such apply, so your friends probably won’t want to play the games with issues either. Thus, you'll often be stuck playing remix modes, Pictureka, and Connect4x4. There’s also a family game show mode where up to four players can go head to head, playing random games against each other, it adds a bit of friendly competition but again you’ll have to play the stinkers in addition to the gems. The plus side is that not many of these games require multiple Wii remotes to play.

As for graphics and sound, they’re the bare minimum. They serve their purpose, and that’s it. At the end of the family game show, when they give the winner the trophy it has fireworks effects go off and the framerate dramatically drops, and it’s not even anything special. If you didn’t pay attention you really wouldn’t notice there was even music in the game, it’s really just that bland.

Other than playing with friends, there isn’t a whole lot of replay value. You might play a few games of Connect 4 against the computer, but even then your friends would likely want to boot up Wii Sports instead to get their fix. As for actual unlockables to extend game time, you can unlock parts to customize your Mr. (or Mrs.) Potato Head- there’s quite a few sets to collect by doing various things- but really there’s no draw to do it.

Family Game Night 2 is just not good. It tries to faithfully represent the original board games while making an enjoyable video game, and it fails at both of these. It alienates the people that love board games by making them too easy, with bad controls, and not always true to the real thing. Then it alienates the people that just like to boot up their Wiis to play with friends, since it lacks the intuitive/fun games and gameplay that gamers have come to expect from this sort of genre. It’s best to spend your 40 dollars buying the real games which this video game (unsuccessfully) tries to recreate.