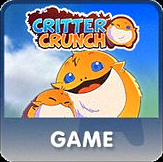 The most fun you will ever have throwing up.

This has been a generation of ports. Playstation 3 and Xbox 360 share a large portion of their respective libraries and games have been made that are available across five or six different platforms at launch, but few probably saw this port coming. Critter Crunch is a game that started out its life as an iPhone app and has since found its way to the Playstation 3 (PSN to be precise). This adorable little puzzle game that focuses on the food chain is a welcome, if unexpected, addition to the service.

Critter Crunch has you playing as Biggs; a fluffy round little creature with a massive mouth that is out collecting food so that he can puke it back into the mouths of his hungry children. Background story is told as a mockumentary complete with its own environmental scientist host reminiscent of shows on the Nature Channel. He explains that Biggs is at the top of the food chain on his small island habitat. Using his long frog-like tongue to feed critters by shooting smaller critters into their mouth until they explode and free the crystal inside that Biggs then digests and stores to feed his children in a torrent of rainbow puke. The storyline and monologue from the host has a great sense of humor about it that permeates throughout the game. Each time you fail a level you are treated to a funny little message from the developers that usually has something to do with Biggs, but not always, such as; “Don’t mess with Texas…..seriously you’ll hurt their feelings and that’s not nice”.

Gameplay works much as the storyline describes it. You play as Biggs running back and forth across the ground as a swarm of critters slowly climb down the vines towards you. By pressing 'X' you can shoot out Biggs’ tongue to grab onto one of the critters climbing towards you and then shoot him into a different column of critters by pressing 'X' again. Medium-sized critters are fed to large critters and smaller critters are fed to the medium-sized ones until you’ve fed them enough that they pop. Popping critters usually takes feeding them twice, but you can also make a food chain by feeding a small critter to a medium critter and then that medium critter to a large critter to pop it. Once you pop a critter a crystal will fall to the ground which will increase your score if you pick it up before it disappears. This is the basics of how you play Critter Crunch, but like any good puzzle game you’ll quickly learn that there’s a lot more to worry about than just feeding smaller critters to larger critters.

Critter Crunch comes with three different gameplay modes. First, is survival mode which taxes you with getting a certain number of points before you are overrun by advancing critters. These comprise the bulk of the levels in the campaign and you will not be able to advance without playing this mode quite often. Once you beat a survival mode level your score is uploaded onto PSN and your overall score is used to give you a ranking. You can increase the final score you get upon completion by getting a combo of seven or more critters and then feeding Biggs’ son that will show up on the side of the playing field begging for rainbow puke. Feeding Biggs’ son will get you a bonus upon completing the level, but while you feed him critters will advance even faster than normal so it isn’t always an option.

Next, you have puzzle mode which gives you a certain number of moves to clear a predetermined array of critters. These are slow and thoughtful levels that take out the time constraints that normally force you to move quickly and think on your feet, and instead they force you to plan out long chains of combos in order to clear the board in as few moves as possible. Finally, there is a challenge mode which requires you to complete a certain task within a certain amount of time or before the critters overrun you. These tasks vary from clearing the board to getting a set amount of points using only combos of three or saving hatchlings by popping the critters behind them and letting them safely fall to the ground.

The single player campaign plays a lot like any other puzzle game. You move Biggs across an island and each area has five different puzzle levels that you can complete. In order to complete an area and move on it’s only necessary to beat three of the possible five levels. This, along with bonus areas, gives the player some choice for how they want to progress and allows them to skip some levels if they are having particular trouble. As you progress from area to area the game will slowly teach you about all the little nuances of playing, such as; 'combo-ing' critters of the same color, vegetarian critters that refuse to eat other critters, and bomb critters that explode when fed.

This leads to my main issue with the gameplay, which is that the single player campaign has a steep learning curve at around half way through the game that seems out of place. I think this jump in difficulty happens too soon since you are still being taught about different types of critters and items to use; so later levels become frustrating as the game adds new gameplay elements while speeding up the tempo at the same time. Survival mode levels particularly suffer from this problem because of how they are randomly generated so often you will feel like you lost a level not because of how you were playing but because you were unlucky in the random placement of an ever growing variety of critters. I actually restarted some levels over and over again because I would look at the critter placement I started out with and decide that there was no way I would be able to pop enough critters to keep up with the speed of the level.

The presentation is extremely unique even if it isn’t perfect. All of the characters and backdrops are hand drawn and the colorful palette works well with the jungle atmosphere. Biggs and his family are adorable little fur balls, and backdrops to the puzzle levels are very pretty if you ever take the time to just stare at them. It isn’t the most technically impressive graphics but it works well. Music is all upbeat and island inspired, but it is not of high enough quality that many people will be clamoring for a soundtrack. While the songs are obviously repetitive, they do well to stay in the background and never got annoying. The most obvious thing missing from the presentation was voice acting. It would really help bring the hilarious narrative together if they put a voice to the nature show host that explains the story’s background.

Value is definitely where Critter Crunch shines. It only costs you seven dollars and took me four hours to complete the single player campaign. You also get 100 different puzzle levels and 55 different challenge levels to do at your leisure. That would be enough for most, but the developers went even further and included online and local multiplayer. The multiplayer either has you pitted against another Biggs as you try to outlast them, or you can work together as Biggs and his Son trying to get as many points as possible in a joint survival mode. Sadly there is sometimes noticeable lag to the online multiplayer which can hurt the experience of some matches. All this put together makes for the kind of value product that other PSN games should be emulating.

Critter Crunch is a fun little title that no puzzle fan should miss. There may be some issues with the difficulty curve in the single player campaign, and some lag in online multiplayer, but the incredible value at seven dollars, heart warming visuals, and interesting gameplay mechanic more than make up for it. Do yourself a favor and pick this game up.