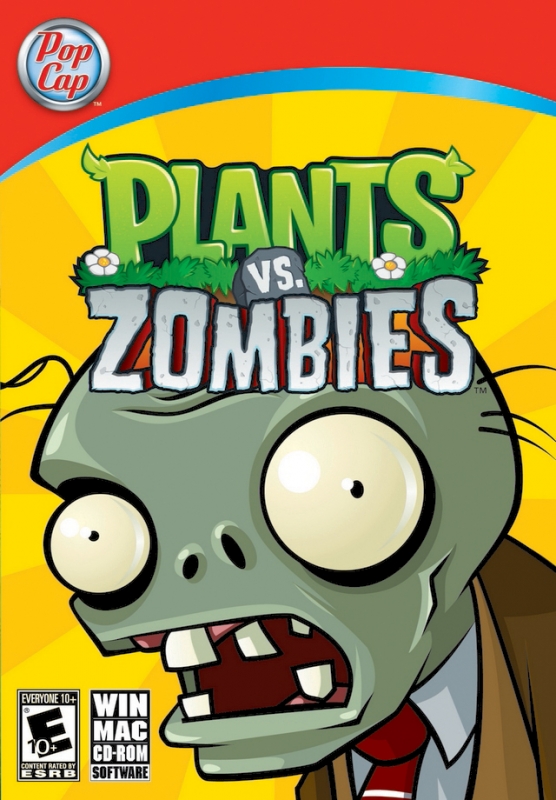 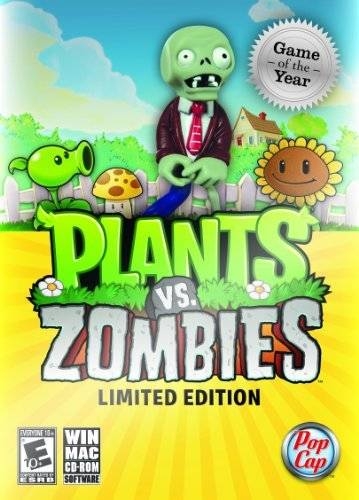 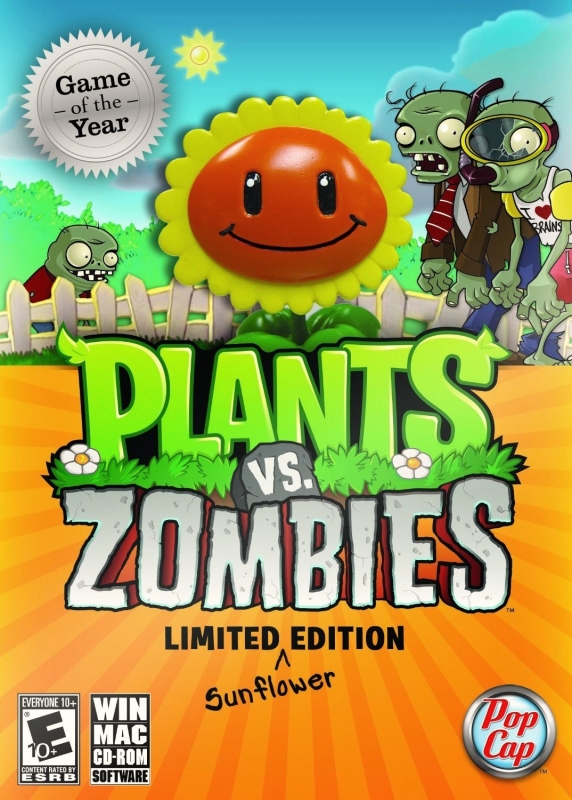 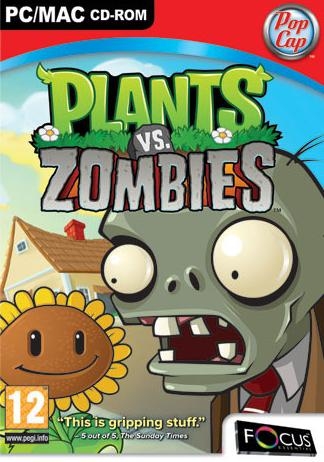 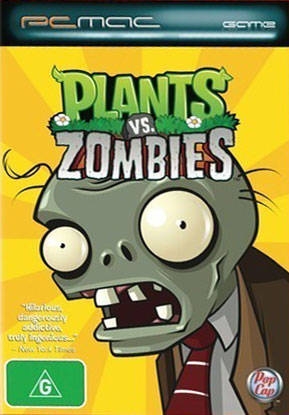 They're coming for your brains... and your money.

Plants vs. Zombies is one of the most high profile and popular releases to emanate from PopCap Games. It’s essentially a tower defence game, where you place a wide variety of militant plants on your garden lawn in order to stave off waves of zombie invaders. Plants vs. Zombies is in many ways quite a simple variation on the genre, all of the levels are an identical size and everything is packed onto the screen-sized grid in front of you. This removes the need to move the camera across a wide playing field, as you do in many other tower defence games. As you can see in the screenshots, the zombies approach from the right hand of the screen and, instead of wandering through a maze-like level, they march towards your property along five or six straight tracks. You must place your defences - in the form of various plants - along these tracks in order to kill the zombies before they reach your house.

Before each round begins you’re given a preview of the types of zombies that will appear during the level and must then select a limited number of plants you wish to use during the round from your inventory. In all there are almost 50 different types of plants to select from, the vast majority of which you unlock simply by completing the main game mode or by purchasing them with the money you collect over the course of the game. There are all sorts of plants here, from the standard ranged Peashooters (a group of several different plants, all of which have a ranged attack that fires different types of peas at the zombies), to the extremely useful defensive Nuts (which form barriers that stop the zombies from advancing), to the ‘Shroom’ family of mushrooms which come in handy during the night time levels, to the Sunflower (an all important source of sun, which allows you to purchase more plants during the game). With such a wide variety of plants to choose from there is plenty of opportunity to play around with all of the different strategies open to you, and through experimenting with different variations you’ll be able to develop a plan of action which best suits your general approach to tower defence games.

For example, my favourite strategy throughout most of the game was to plant a back row of Sunflowers as quickly as possible, whilst at the same time developing a line or two of Peashooters. Then during the mid-to-late game I would create a row of my favourite plant - the ‘Chomper’ (a venus fly trap which eats a zombie whole, but which needs a long time to swallow the zombie before it is able to eat another one) - which would be placed directly behind a protective wall of Nuts. It’s not necessarily the optimal game strategy (indeed, Chompers have serious drawbacks, but they are just too cool to overlook), but it best suited my cautious and defensive approach to tower defence games. It’s undoubtedly one of the game’s strengths that this is a tower defence game which truly allows you to develop a strategy which best suits your personality. This is not a tower defence game where you need to use a set group of plants if you’re going to win - there really is a lot of flexibility.

It’s not just the plants which are varied either. There are also 26 different types of zombies in the game. You start off facing standard zombies, and then they gradually start to better protect themselves in battle, using traffic cones or metal buckets for protection, or using a broken door as a shield. Towards the end of the game you start facing more offensive zombies, such as the dreaded Gargantuar, which will quickly flatten all of your plants if you’re not prepared for him. There are also some more bizarre and humorous creations, such as the Michael Jackson Thriller zombie (who dances his way towards you, summoning zombies from the ground as he goes) or the zombie bobsled team.

There are also little twists to the gameplay formula, and this helps to keep things interesting. For example, some levels will take place at night when the Shrooms are much more effective. Also, over the course of the game you move to other parts of the property, including the back garden, which introduces the swimming pool and water-based plants. Some levels also remove the ability for you to select the plants you use, and instead you must make effective use of the set plants you’re given on a conveyor belt. These levels were a particular favourite of mine. Finally, throughout the game you collect money, and this can be exchanged for various items from your slightly insane neighbour. These are all very minor means of making the game more interesting, and when combined together they make Plants vs. Zombies much more replayable and addictive than it would otherwise have been.

There is one major flaw to the gameplay, and it is that the game is far too easy and - despite the amount of variety on offer - quite shallow, particularly if you’re already a fan of tower defence games. Whilst all of the things I’ve listed above make for a very accessible game, with a fair amount of lasting appeal, this comes at a price. The main game mode never once challenged me until the very last level against the boss, and even then I didn’t lose to him. Throughout most of the game a line of Sunflowers, Peashooters and Nuts is all you really need, and even during the later stages you don’t need much more than that. As such, I wouldn’t recommend Plants vs. Zombies to tower defence players looking to get a challenging experience from the core game, although it’s certainly a brilliant introduction to the genre for newcomers.

Graphically this isn’t an impressive game by any means, as it looks like a high-end flash game thanks to its simple graphics and animations, but the presentation does an excellent job of creating a humorous and light-hearted game. The zombies, for example, will sometimes send you quirky notes at the end of levels, which further builds up their personality. The plants are full of personality as well, which is precisely one of the reasons why plants were chosen over towers. The music, like the game, is very catchy and refreshing, but be warned: I’ve had it stuck in my head for days, and the same thing may happen to you!

Value is a surprising strength of the game. Usually tower defence games are quite short, particularly those without a proper storyline to tie the levels together, but Plants vs. Zombies isn’t just a pretty lengthy game, it’s also full of extras, so the game will keep you coming back for more. I’ll detail all of them separately:

The extra modes include a Survival mode (which is pretty self-explanatory), a Puzzle mode and some mini-games. There are 20 mini-games, and these are variations on the main game, so for example you might have to defend against zombies with attacking plants for heads, or you might have to deal with portals which re-direct your ranged attacks. Puzzle mode is similar to this, but is more strategic. There are two puzzle games – Vasebreaker and I, Zombie. In Vasebreaker you break vases that are placed on your lawn, then using the useful items that pop out of them you have to construct a makeshift defence to fend off any zombies that pop out. In I, Zombie, one of the best extras in the game, you get to control the zombies. You’re given a set amount of funds, and with those funds you purchase zombies and send them off to take on the plants, so it’s a great twist on the standard gameplay formula.

Plants vs. Zombies costs $19.95 from PopCap’s website, but if you’re interested in purchasing the game then I definitely recommend purchasing via Steam, where it’s on sale for just $9.99/£6.99, at the time of writing. Such a huge variation in pricing is a little disconcerting, but there we go. Also, I would like to briefly mention that you can play a really lengthy trial of the game via those two sites as well, so be sure to check that out if you’re unsure about purchasing the game.

Plants vs. Zombies is packed with both personality and content. It also exhibits the addictive gameplay qualities that are the hallmarks of the very best games in the genre. One word of warning though - the main game is not very challenging (although some of the extras can be), particularly for long-time tower defence players, and such people may find that the gameplay gets repetitive quite quickly. However, that and a few other minor caveats aside, Plants vs. Zombies is a great tower defence game that’s certainly worth a purchase.