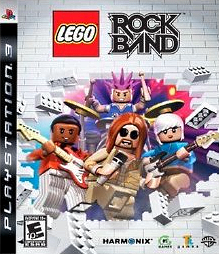 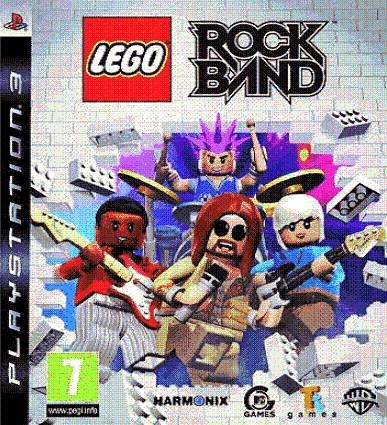 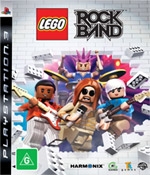 This review was made with Legos.

When LEGO Rock Band was first announced no one seemed to know exactly what to expect. Would it be a short, super-easy kids music game the length of a track pack, or would it be a fully developed game that anyone can pick-up and play. When news started rolling in that it was a fully developed game people started to breathe a sigh of relief; this wasn't going to be a childish, short version of Rock Band. This game is certainly geared towards kids, but it's still a blast for adults as well.

Lego Rock Band features a total of 41 songs. This is more than double what the track packs contain (21 songs), but it's 20 songs fewer than Activision's Band Hero, which has 61. Since average pricing for the game is between the standalone Rock Band 2 game disc and the usual $29.99 USD, it's quite a steal for the amount of content. Music selection ranges from Elton John's Crocodile Rock to Pink's So What. There is a little piece of every variation of the rock genre in this game. Downloadable songs do work, but content is filtered to be "safe for children", so this leads to very few songs being available to purchase compared to any other Rock Band game.

Speaking of content, I guess I should probably go into the differences between Lego Rock Band and Rock Band. The core gameplay is exactly the same. Match the colored frets while you strum the guitar, or beat the drum. The unique part of this is that the frets are Lego pieces. This game does bring the brand new difficulty level of Super Easy to the Rock Band franchise. Playing the guitar then becomes extremely easy; all you have to do is strum, fret buttons aren't necessary at all. If you are singing you're introduced to a new singing style, where pitch measurement is removed and replaced with a bouncing ball. Meanwhile the drums have the bass drum set to automatic.

One of the major additions to the game is the "Rock Power Challenge", which is a special gig which removes overdrive and makes your band work as a team. If someone fails, your band loses. Band members play individual parts of a song by themselves as everyone else's notes are invisible until their part comes up. Each section is based on a 100% scale. Notes for the other players then fade in when a player's section is roughly 90% complete. The last 40 seconds or so of a song are played by all band members. Playing solo just disables overdrives. All of this happens as you perform some odd-ball, hilarious event like destroying a building or trying to escape the wrath of a Lego dinosaur. Afterwards, you earn triple the fans and money you normally would. I could actually see this working in a normal Rock Band game.

There are also some minor game modifications that can be activated in the opening menu. You can turn on an automatic bass drum so you don't tire your foot out pounding the darn thing on the harder difficulties. There is also an option that will double the speed of a song. This makes things even more interesting and challenging if you're an "expert fret artist" in this game. The last option removes the track, which literally means it removes all signs of what notes you're supposed to hit from the screen. I have no idea why this option was included, because unless you memorise the notes for some of the songs then it really is pointless and pretty much makes it impossible to play.

The story mode is ridiculously long. There are nine vehicles to unlock and seventeen venues, each containing a total of 161 gigs to play, excluding the shameless and endless sets. Most of the set lists are either randomized or 'select the song' gigs, and the story mode would've been much better if some of these were cut out altogether. Despite the issue of length, the story is corny, insane, completely random, and at the same time incredibly enjoyable. The cut-scenes and Rock Power Challenges just make this game work. They are bloody hilarious. For a kid's game, this story can actually be enjoyed by anyone of any age based on its comic value.

Starting off there aren't very many options to make your own character, or decorate your pad. As you play through the many gigs in this game you will unlock character models that include new pieces of Lego, which you can then snap onto your own Lego character and also purchase them in the "Lego Rock Shop". You can also unlock single pieces of Lego clothing, new instruments and furniture for purchase, to make your Lego character and pad fit your individual style.

Visually speaking, this game is nothing jaw-dropping. It's Rock Band with Lego pieces. The visuals are on par with Lego Batman and Indiana Jones. Animations are still corny due to everything consisting of animated pieces of Lego. The new cut scenes, while quite humorous, aren't especially spectacular. There is some screen shuttering and slight slowdowns when playing with three or four people and using overdrive.

At the end of the day, Lego Rock Band is like every other Lego branded game. Fun, childish, and full of random humor that can easily make you chuckle. This game is far from perfect, but the fact is that it's enjoyable for anyone who plays it, no matter what age, and definitely deserves some credit. With a pretty good amount of character customization and brand new features, anyone who loves Rock Band, has kids or wants an easy introduction to the Rock band franchise should consider picking this game up.